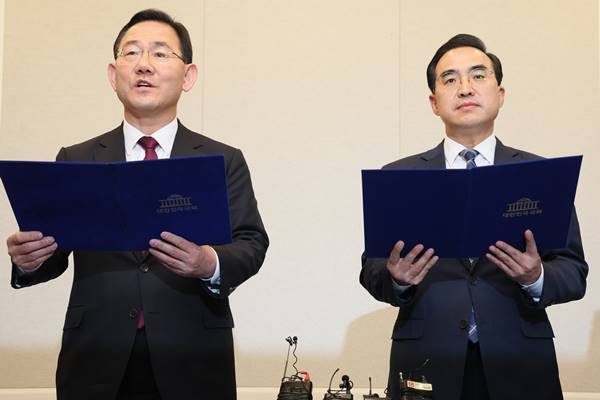 The nation's ruling and opposition political parties have agreed to launch a parliamentary probe into the fatal crowd crush accident in Seoul’s Itaewon last month.

The floor leaders of the ruling People Power Party(PPP) and the main opposition Democratic Party(DP) on Wednesday announced the decision after holding negotiations on the thorny issue.

The related bills will be passed on Thursday during the plenary session, setting the stage for the 45-day probe that will be composed of nine parliamentarians from the DP, seven from the PPP and two independents. It will be headed by a DP lawmaker.

The scope of the probe will include the situation room of presidential office, the prime minister’s office, the interior and safety ministry and the Supreme Prosecutors’ Office as well as the national crisis management center, the National Police Agency, the National Fire Agency, the Seoul Metropolitan Police Agency and the Yongsan District police.

The ruling camp had initially proposed that a parliamentary probe be held only if an ongoing police investigation into the matter is concluded and assessed to be insufficient.

The decision comes more than three weeks after the crowd crush that killed 158 people in central Seoul where large crowds had poured into the alleys of Itaewon to celebrate Halloween.
Share
Print
List