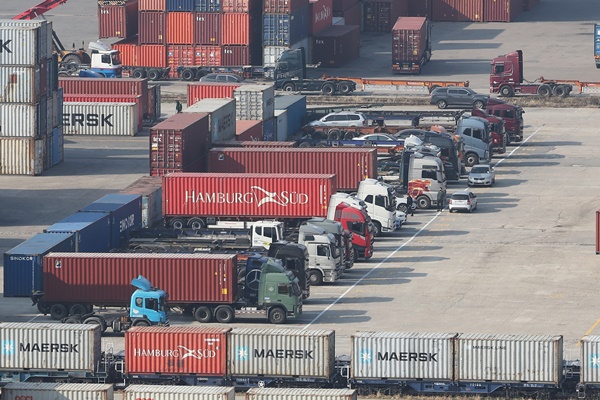 Anchor: A general strike by unionized truckers, entering its second day on Friday, has begun to adversely impact the nation's cement and steel industries. The Yoon Suk Yeol administration is mulling strong countermeasures, including a government order to end the walkout.
Choi You Sun reports.

Report: The Cargo Truckers Solidarity union under the Korean Confederation of Trade Unions(KCTU) has continued its general strike at 16 locations nationwide for the second day on Friday, demanding improved labor rights.

The transport ministry said as of 5:00 p.m. Thursday, the freight volume entering and exiting the 12 ports in the country dropped to around 40 percent of the daily average.

The walkout has begun to take a toll on shipments in the cement and steel industries as well.

The Korea Cement Association estimated losses in sales of about 19 billion won on Thursday alone, with less than ten-thousand of the usual 200-thousand tons of cement carried off.

Hyundai Steel, the steelmaking affiliate of Hyundai Motor, was also unable to ship 50-thousand tons of steel products on Thursday.

The Korea International Trade Association(KITA) said 19 consignors have reported problems regarding suspended production due to issues with deliveries of raw and subsidiary materials.

A group representing small- to medium-sized enterprises(SMEs) issued a statement urging the unionized truckers to resume their routes as the strike has exacerbated their financial difficulties amid soaring inflation, the weak local currency and high interest rates.

The government, meanwhile, has set up an emergency response team to check up on damages incurred at major industries, while considering various response measures.

In a post on his official Facebook page, President Yoon Suk Yeol warned that the government may consider issuing an order to return to work if the disruption to the nation’s logistics continues. Rejecting the order would entail criminal prosecution or a cancellation of truckers' licenses.
Choi You Sun, KBS World Radio News.
Share
Print
List