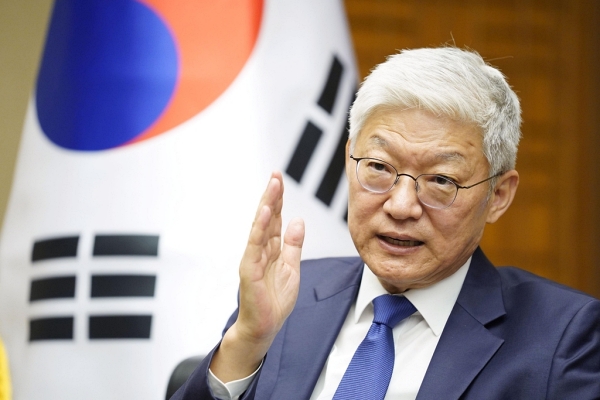 South Korea's Ambassador to Japan Yun Duk-min reportedly said that he cannot rule out the possibility of President Yoon Suk Yeol visiting Japan within this year in light of rapid changes in international affairs.

The top diplomat made the remarks in an interview with Kyodo News, expressing hope that the so-called "shuttle diplomacy," in which the leaders regularly visit each other's country, may resume sooner than expected.

In the interview published on Saturday, the ambassador said that South Korea and Japan have been confronted only over historical issues for the past decade, stressing that they need to look at history as it is but also should seek future-oriented cooperation.

Ambassador Yun said that Yoon's visit to Japan, if realized, will be symbolic in normalizing relations between the two nations, adding international issues, including provocations by North Korea, are also expected to be on the agenda during the possible visit.

The shuttle diplomacy has been stalled since December 2011 when then President Lee Myung-bak held summit talks with then Japanese Prime Minister Yoshihiko Noda in Kyoto.
Share
Print
List