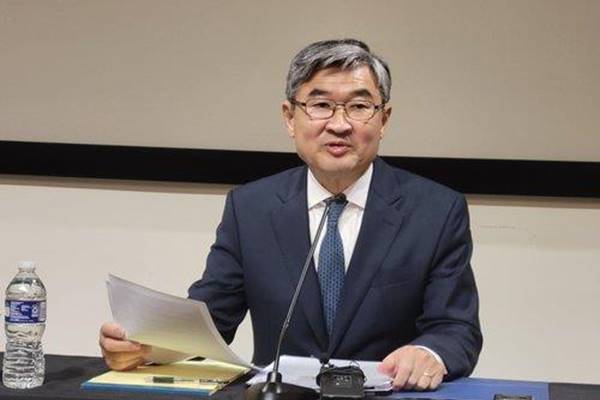 South Korea's Ambassador to the U.S. Cho Tae-yong said on Monday that the strong rhetoric and protest issued by North Korea prove that the joint efforts by South Korea and the U.S. are working.

Ambassador Cho presented the assessment in a meeting with reporters in Washington, saying that North Korea is continuing its provocations this year at an unprecedented pace.

The ambassador said that, as shown in the statements released in the recent year by the North's top diplomat Choe Son-hui and Kim Yo-jong, Pyongyang is trying to blame Seoul and Washington for its provocations, taking issue with the allies' combined military exercises and the U.S. extended deterrence. He added these efforts will not be accepted by the international community.

Cho then said that the North's sharp reaction is evidence that the efforts by South Korea and the U.S. are effective.

Noting that Pyongyang has already fired 63 ballistic missiles this year, far exceeding the previous record of 25 in 2019, Cho said that South Korea is closely cooperating with the U.S. as well as Japan to deal with the provocations from the North.

The ambassador added that Seoul and Washington are also responding to North Korea's illicit cyber activities aimed at securing funds for its nuclear and missile programs.
Share
Print
List