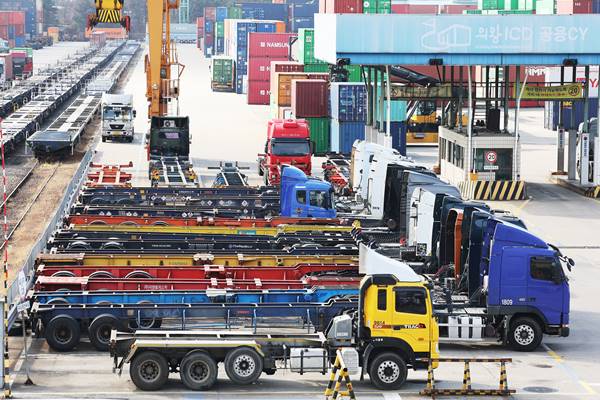 The transport ministry invoked a government order requiring unionized truckers in the cement industry currently on a general strike to return to work soon after the order was approved by the Cabinet.

At a press briefing on Tuesday, Minister of Land, Infrastructure and Transport Won Hee-ryong said the order applies to the cement industry, for which the normalization of transport is deemed the most urgent.

Around two-thousand-500 cement truck drivers from over 200 transportation businesses are subject to the order, according to the ministry.

The government estimates shipments in the industry have plummeted by up to 95 percent since the walkout began last Thursday, causing disruptions at most of the nation's construction sites.

Stressing that the objective of the order is not to punish the truckers but to restore the country's distribution network and minimize damage to the economy, Won urged the Cargo Truckers Solidarity union to call off the strike.

Truckers and their employers, expected to receive the order Tuesday, will have until 12:00 a.m. Thursday to halt their group action and return to work.

Those that refuse to comply without justification could have their license revoked or face up to three years in prison or a maximum fine of 30 million won.
Share
Print
List