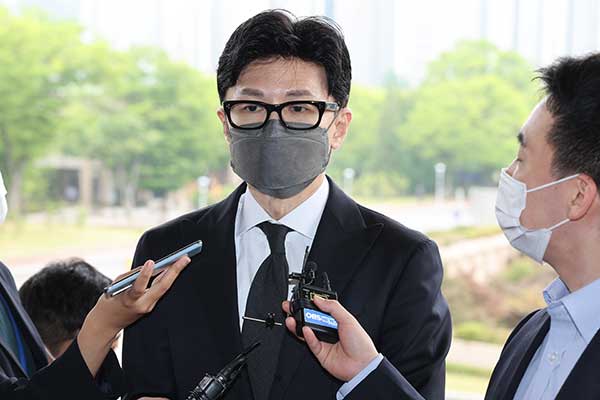 Justice minister Han Dong-hoon slammed a group of YouTubers who attempted to enter his house uninvited as "political gangsters."

The minister’s scathing rebuke came after five people that run the YouTube channel “Citizen Press The Tamsa TV” livestreamed a visit to Han's apartment in southern Seoul on Sunday while the minister's wife and child were reportedly inside.

The YouTubers, who have been under police investigation for allegedly tailing the minister for nearly a month on his way home from work, yelled about interviewing Han and tried to open the front door.

The minister has filed a complaint with the police for trespassing and retaliation, and the police have taken protective measures, including reinforced patrol of the area.

While the YouTubers claimed that they were following protocol in trying to conduct an interview, Han said allowing such illegal acts under the pretense of news reporting would lead to a lawless society.

Speaking to reporters on Monday, Han said the DP and The Tamsa TV have collaborated like politicians and political gangsters in the past who fail to even apologize even after their claims are found to be false.

The channel earlier faced allegations of colluding with main opposition Democratic Party(DP) Rep. Kim Eui-kyeom on claims that the minister had a late-night drinking party with President Yoon Suk Yeol and a group of lawyers. The claims were later found to be false.
Share
Print
List