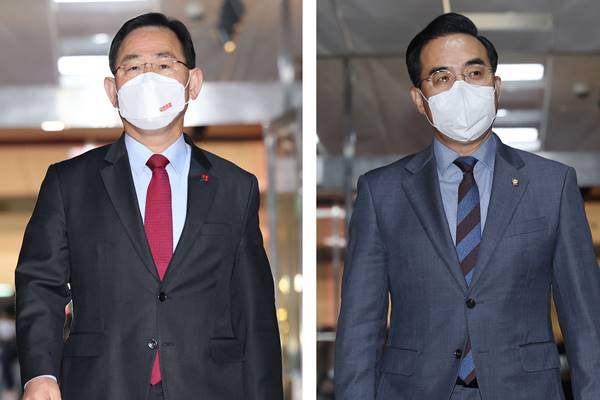 The ruling People Power Party(PPP) and the main opposition Democratic Party(DP) are in conflict over opening a plenary session of the National Assembly to handle a DP-backed bill on the dismissal of the interior minister over the tragic Itaewon crowd crush.

National Assembly Speaker Kim Jin-pyo and the floor leaders of the PPP and DP, Joo Ho-young and Park Hong-keun, respectively, met on Thursday morning to discuss whether or not to convene a plenary session but could not reach an agreement.

Speaking to reporters after the meeting, Joo said that he had strongly requested that Kim not open a plenary session without an agreement on the agenda, arguing that the passage of next year’s budget plan by the Friday deadline could be disrupted by a politicized agenda.

Meanwhile, DP floor leader Park insisted that the plenary session should be held on Thursday, saying that the parliamentary schedule had been agreed to by both parties.

The dispute follows the tabling of a motion by the DP on Wednesday calling for the dismissal of interior minister Lee Sang-min to hold him accountable for the bungled emergency response to the deadly crowd crush in Seoul last month.

The Assembly speaker is expected to make a final decision on the plenary session after gathering the opinions from the floor leadership of both parties.
Share
Print
List