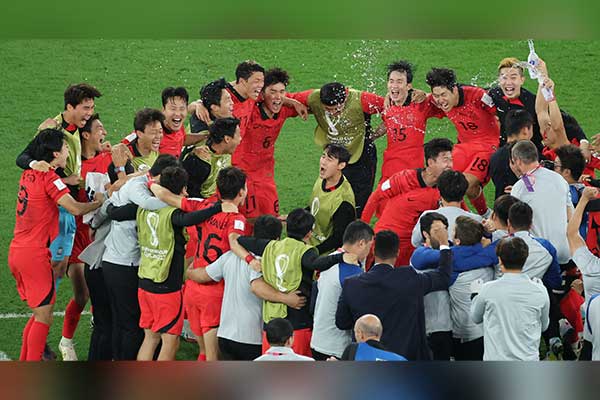 Anchor: Korea came back from the brink of group elimination to advance to the Round of 16 with a 2-1 victory over Portugal in their final group match of 2022 Qatar World Cup on Friday, local time. Uruguay defeated Ghana 2-0 in the other Group H duel, helping Korea overcome a slim chance to progress and finish a runner-up with a goals-for advantage over the Latin American side. Reaching the knockout stage only for the third time, the Taegeuk Warriors will now face the Group G winner in the last 16, five-time winner Brazil.
Moon Gwang-lip has more.

Report: South Korea advanced to the Round of 16 with a 2-1 come-from-behind victory over Portugal in their third and final Group H match at Education City Stadium in Al Rayyan on Friday, local time.

Hwang Hee-chan scored the winner in the second-half stoppage time, lifting the Asian side to their first knockout appearance in 12 years. The comeback started when defender Kim Young-gwon salvaged a 1-1 tie after Portugal took an early lead on a Ricardo Horta goal.

With the even scoreline giving Korea only two points in the group, the Taegeuk Warriors had to win the match to advance. In addition to a win, they also needed much help from their rivals in the other Group H match of the day.

At halftime, the result of the other match happening simultaneously at Al Janoub Stadium in Al Wakrah was favorable for Korea; Uruguay was leading Ghana 2-0 at the break with Giorgian de Arrascaeta scoring both goals. The South American side would go on to seal the victory by that margin, leaving it up to Korea to seal its own fate with a single-goal victory over the 2016 European champion.

After a goaless 45 minutes in the second half, Korea took the lead through the Wolverhampton Wanderers forward Hwang, who came on in the 66th minute as a substitute for Lee Jae-sung to convert a pinpoint pass from Son Heung-min after a long-distance dribble in the 91st minute.

With Portugal’s spot in the last 16 already secured with two victories, Korea needed Uruguay to beat Ghana but with as few goals as possible. South Korea entered the match in third place in the group on a single-goal edge over Uruguay and had to play for the biggest win possible, but a 2-1 victory proved to be enough.

Lee Kang-in, a 21-year-old playmaker signed to Spanish club Mallorca, injected energy into Team Korea with his his first World Cup start. Defender Kim Min-jae of SSC Napoli of Italy was on the bench due to a calf injury, with Kwon Kyung-won starting in his center-back place.

There was initially speculation that Cristiano Ronaldo would sit out the match to prepare for the knockout stage, but the 37-year-old star was among the starters for Portugal, who fielded a strong team in an effort to confirm a first-place finish and avoid a possible duel with Brazil in the Round of 16 match.

Tottenham Hotspur forward Son, still recovering from facial injuries sustained in a UEFA Champions League match last month, started for Korea for the third game in a row, an effort now manifesting in a debut appearance in the knockout stage in his third – and possibly last – World Cup.

Team Korea coach Paulo Bento was absent from the touchline due to the red card received during its 3-2 loss to Ghana for protesting a call by referee Anthony Taylor, who denied Korea’s last chance at an equalizer by blowing the game-ending whistle as Korea set up for a corner kick.

It was only the second face-off between South Korea and Portugal in a World Cup, with the previous match coming in the group stage at the 2002 World Cup that ended in a 1-0 upset for South Korea on a Park Ji-sung goal that knocked out the Portuguese side featuring Bento in midfield.

The Portuguese national signed in 2018 to lead Team Korea through the 2022 World Cup and may now be asked to continue at the helm with his latest team’s victory over his home country.

Korea advanced from group stage only twice before; at the 2002 World Cup, which it co-hosted with Japan, progressing as far as fourth place. It crashed out of the Round of 16 during the 2010 South Africa World Cup.

Meanwhile, Korea’s is the third knockout berth given to Asian Football Confederation(AFC) members at Qatar following Australia and Japan, marking the first time as many as three AFC teams will play in the Round of 16 at the same quadrennial event.
Moon Gwang-lip, KBS World Radio News.
Share
Print
List