S. Korea's World Cup Comes to End with 4-1 Loss to Brazil in Round of 16 Match 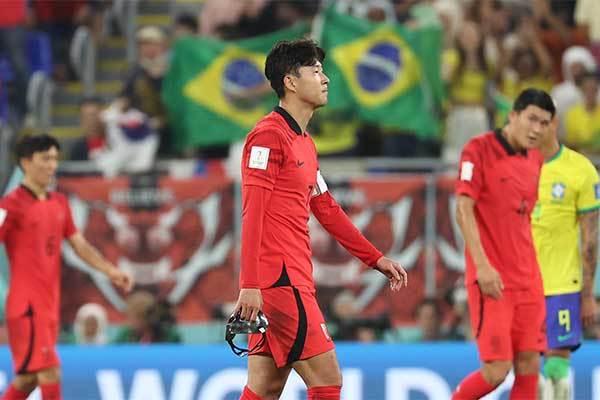 Anchor: South Korea’s campaign in the 2022 Qatar World Cup has ended with a 4-1 loss to tournament favorites Brazil in the Round of 16 at Stadium 974 in Doha on Monday. Brazil’s dominant performance in the first half saw them go into the break with four goals. Korea pulled one back in the second half, but were unable to produce the same magic that saw them make it to the knockout round.
Tom McCarthy has more.

Report: South Korea’s World Cup campaign came to an end with a 4-1 loss to five-time winners Brazil in their 2022 World Cup Round of 16 match at Stadium 974 in Doha, Qatar on Monday night.

Brazil took the lead with a Vinicius Junior goal in the seventh minute. South Korea conceded a penalty four minutes later with a Jung Woo-young foul on forward Richarlison, which Neymar converted to double Brazil’s lead.

Richarlison grabbed a goal himself in the 29th minute to make it 3-0, with midfielder Lucas Paqueta adding a fourth seven minutes later with a half-volley just inside the penalty area.

The second half started out slowly for both sides, but Korea were able to find the net through substitute Paik Seung-ho, making his World Cup debut in the 65th minute. His long-range effort hit the back of the net eleven minutes after coming on to offer South Korea some redemption.

The final whistle at Stadium 974 brought Team Korea’s World Cup campaign to a close, while Brazil will now take on Croatia, runners-up in the 2018 World Cup, in the Quarter-finals at Education City Stadium in Doha on Friday.

In a post-match interview, team captain Son Heung-min promised to Korean supporters that the national team will grow through the experience.

[Sound bite: S. Korean Nat'l Football Team Captain Son Heung-min (Korean-English)]
"I have nothing to say but sorry [to the fans] for falling short of expectations. All the players and staff members did their best and I hope the fans understand that we did our best. I would like to thank them so much for their support, and for this special experience I've never had before. Our players and I will show improvements."

Forward Cho Gue-sung admitted that Brazil is still too big for Team Korea.

[Sound bite: S. Korean Nat'l Football Team Forward Cho Gue-sung (Korean-English)]
"They are really great players as we witnessed on and off the field. Brazil are simply number one in the world and I can only admit that. We need better preparations to compete against these players."

South Korea’s tournament started with a 0-0 draw with Uruguay at Education City Stadium on November 24, followed by a 3-2 loss against Ghana at the same venue four days later.

Going into the final group match in third place, Korea not only needed to beat ninth-ranked Portugal but also relied on a favorable result in the Uruguay-Ghana match to send them through to the Round of 16 for the first time in 12 years.

Along with a shock 2-1 win for Korea over Portugal, Uruguay's 2-0 win over Ghana put the Taegeuk Warriors second in the group ahead of the South American side on goals scored to send them to the knockout stage, but they were unable to overcome the world's number-one ranked team, Brazil.

The 2022 World Cup was South Korea’s third appearance in the knockout round of the World Cup, with the first coming in 2002 on home soil when they reached the Semi-finals to finish fourth. In the 2010 South Africa World Cup, they were knocked out in the Round of 16 by Uruguay.
Tom McCarthy, KBS World Radio News.
Share
Print
List