Unionized Cargo Truckers to Vote on Ending Strike on Friday 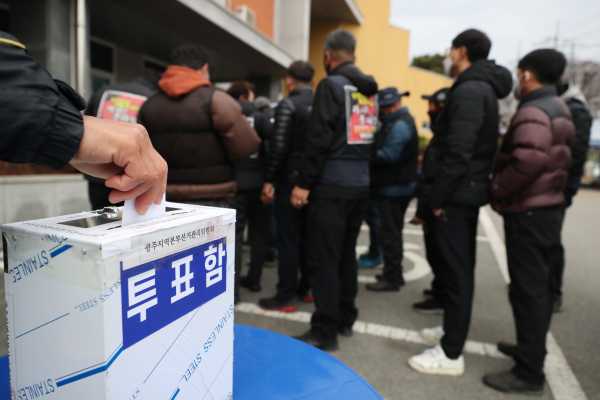 Unionized cargo truckers will vote on whether to end their strike as it enters its 16th day on Friday.

The executive committee of the Cargo Truckers Solidarity made the decision on Thursday evening in an emergency meeting at the Daejeon office of the Korean Confederation of Trade Unions.

In the marathon meeting, the committee decided to hold a vote of all union members on Friday on whether to continue or end the walkout. The vote will begin at 9 a.m. with the results likely to come around noon.

The decision comes after the main opposition Democratic Party shifted from its earlier position supportive of the hard-line union and accepted the government and ruling People Power Party's proposal to extend the minimum freight rate policy for cement and container truckers by three years.

The leader of the union, Lee Bong-joo, said in a press conference that the union has decided to accept the proposal agreed on by the ruling and opposition parties, while urging the government and the ruling party to swiftly legislate the proposed extension of the policy, which is set to expire at the end of this year.
Share
Print
List