‘The Day of the Sun’ in North Korea 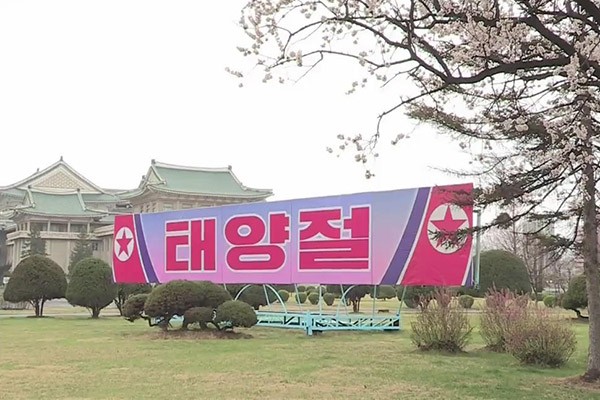 In April, South Korea commemorates many anniversaries or occasions such as the April 3rd Jeju Incident,   Arbor Day on April 5th, the establishment of the Korean Provisional Government on April 11th, 1919, and the April 19th Student Revolution in 1960.

For North Korea, April is also an important month, as the nation celebrates the Day of the Sun on April 15. Today, we’ll learn about what this particular day is and why it is considered so important in the North with Ahn Chan-il, a North Korean defector who heads the World Institute for North Korea Studies.

April 15 is the birthday of North Korea’s founder and late leader Kim Il-sung, the grandfather of current leader Kim Jong-un. It’s designation as North Korea’s biggest holiday is the culmination of a massive cult of personality around Kim Il-sung that he began to cultivate in earnest in the late 1960s. Accordingly, his birthday was named the nation’s biggest holiday in 1972, when the leader was 60 years old. It was designated as “The Day of the Sun” in 1997, three years after his death. His mausoleum is even called the Kumsusan(금수산) Palace of the Sun.

Kim Il-sung was born on April 15, 1912, in Mangyeongdae, now a suburb of Pyongyang. When he turned 50 in 1962, he called his birthday the “April 15 holiday.” It became an official holiday in 1968 when North Korea began to consolidate the Kim Ill-sung unitary leadership system and was renamed “The Day of the Sun” in 1997.

In North Korea, Kim was identified with the sun. “The Day of the Sun” implies that the sun or Kim was born on April 15 and Kim was the progenitor of the race of the sun, that is, the North Korean people. It is easy to imagine that this important day is celebrated in a big way in the North.

Among national holidays in North Korea, the Day of the Sun is by far the most important. A variety of commemorative events are held across the nation on this day, including rallies, song events, athletic competitions and exhibitions of flowers named after Kim Il-sung. In a show of force, military parades were typically held on Kim Il-sung’s birthday, with particularly large ones occurring on fifth and tenth anniversaries, like 65th or 70th.

North Korea has 19 national holidays, which include traditional Korean holidays like Lunar New Year’s Day and Chuseok, and more recent socialist holidays such as the birthdays of former leaders Kim Il-sung and Kim Jong-il.

Degree conferment ceremonies, which in most other countries follow the academic year, are held on the Day of the Sun in North Korea. The nation also celebrates the occasion with a dazzling display of fireworks along the Daedong River and an opulent ceremony at the Rungrado May Day Stadium in Pyongyang.

Mr. Ahn explains why many North Koreans look forward to the Day of the Sun.

North Koreans eagerly await the Day of the Sun, as they can take two or three days off work and enjoy a plethora of entertainment options. Most importantly, they receive gifts such as cooking oil, liquor, cookies and tobacco. The gifts have been reduced drastically since the collapse of the public distribution system in the mid-1990s, however. Moreover, the Korean Children’s Union and the Workers’ Party admit new members on this day. Indeed, the holiday is a rare, joyful occasion when the people can relax and enjoy many things.

In time for the Day of the Sun, the North Korean people can take time off work and enjoy special rations provided by the state. Each household is typically provided with up to 1 kilogram of meat, 1 kilogram of tofu and a bottle of liquor. Children under 12 are given a kilogram of candy and cookies made of corn and flour in the name of the the late leader. Everyone from students to company workers have a pleasant time together, taking part in events and sharing food.

Apparently, North Korean authorities want the people to remember the Day of the Sun as a wonderful occasion. But it’s not necessarily fun for everyone.

Social organizations and military units have to sing songs of loyalty, dance or recite poems on the Day of the Sun. They usually practice three to four hours a day for months beforehand. They need to rest at home after work, but in many cases, their voice gets hoarse from singing too much. Those who recite poetry have to memorize a five-page-long poem and read it out in front of a crowd of several hundred people. The North Korean people are used to memorizing the leader’s New Year’s message. Still, practicing singing and learning poems by heart is quite demanding.

Although the Day of the Sun is a holiday, there is little time for actual rest and relaxation, because participation in various cultural and sports events is mandatory. In addition, the people have to clean Kim Il-sung statues scattered around the country and prepare flowers to be offered to the statues. They are even mobilized for a military parade, when necessary. Therefore, April is a tough time for the North Korean people, both physically and psychologically.

In the past, the North Korean authorities would use rations as a form of control over the people. Current international sanctions against the Kim regime, however, reduce the efficacy of such tactics, and there were reports that few, if any, special rations were distributed in North Korea on the Day of the Sun last year. Nonetheless, North Korea still attaches great importance on the birthday anniversary of the country’s founder.

Kim Il-sung died on July 8, 1994, but the phrase “Our great leader is with us forever” is still recited. Kim Il-sung’s legitimacy was passed on to his son Kim Jong-il and again to current leader Kim Jong-un.

To justify the hereditary rule over three generations and secure the legitimacy of the current regime, North Korea needs to continue to highlight the greatness of the eternal leader, whether citizens like it or not.

I don’t think North Korea will celebrate the Day of the Sun too clamorously this year. But considering the regime’s recent activity at its missile-launch site in Dongchang-ri after the breakdown of its second summit with the U.S. in Hanoi, we cannot rule out the possibility that North Korea may hold a particularly eye-catching event in commemoration of the Day of the Sun next week.

North Korea uses the Day of the Sun as a means of bolstering the regime’s legitimacy. This year, as in previous years, the nation has been holding or will hold various commemorative events to liven up the atmosphere.

It is unlikely that North Korea will hold a military parade on April 15 this year. But we certainly have to wait and see if leader Kim Jong-un will make any important announcement about the nation’s foreign policy priorities, especially after the collapse of the Hanoi summit.