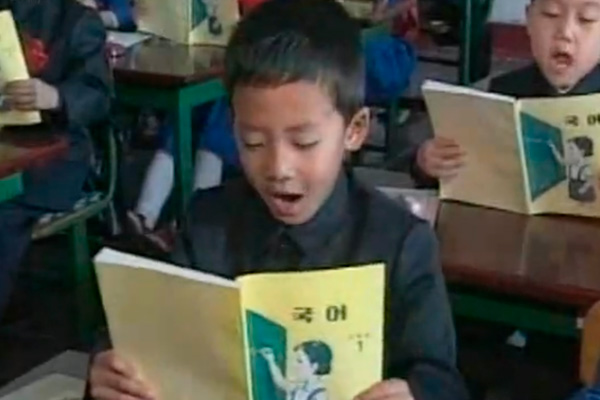 Since the Korean Peninsula was officially divided in 1948, when Seoul and Pyongyang established their own respective governments, many things, including the Korean language, have evolved differently in the two countries.

Today, we’ll learn about the North Korean language and language differences between the South and the North with Professor Chung Eun-chan at the Institute for Unification Education.

After Korea’s liberation of Japanese colonial rule in 1945, both ends of the Korean Peninsula continued to follow language guidelines called the “Proposal for Unified Korean Orthography” that was published in 1933. But in 1949, North Korea abolished the use of Chinese characters and promoted the Korean alphabet of Hangeul instead. The major purpose of the new policy was to eradicate illiteracy and instill communist ideology in the general public more effectively.

North Korea introduced new rules for Korean orthography in 1954 and published the “Standard Korean Language” in 1966. It is generally believed that from that point, Korean in the South and North began to diverge significantly. Also around that time, North Korea began to refer to its own language as “cultural language,” in an apparent move to differentiate its language from the one used in South Korea, which called it “standard language.” The “cultural language” in North Korea is largely based on the Pyongyang dialect.

South Korea has its own rules for spoken Korean and Hangeul orthography, but North Korea’s “cultural language” is quite different from what it calls the South’s “standard language.” Inspired by the speech patterns of the working class, the North Koreans replaced Chinese characters and foreign words with Hanguel and native Korean words. Professor Chung now talks about some differences between the two Koreas in orthography and pronunciation.

One of the most conspicuous differences is the varying pronunciations and spellings of characters. In North Korea, “r” is (written as “ㄹ” in Korean) is kept, as in “ryeoja”(려자), meaning “woman,” and “ryeoksa”(력사), meaning “history.” In the South, those words are pronounced as “yeoja(여자) and yeoksa(역사), respectively, as the initial (“ㄹ” or) “r” is omitted in both spelling and pronunciation under certain conditions.

The same rule is applied to “r” between syllables in some cases, like in “daeryeol”(대렬) and “gyuryul”(규률) in the North, meaning “line” and “rule,” respectively, which are pronounced as “daeyeol”(대열) and “gyuyul”(규율) in the South.

North Korea uses these orthographic and phonetic differences to highlight its linguistic and national identity. To be more specific, South Koreans typically do not pronounce and write all “r”’s and “n”’s, while North Koreans do. Another difference is that the “s” sound is inserted when forming some compound words in the South, while it is left out in the North.

In broadcasting, North Korean announcers use fluctuating and confrontational tones in order to be provocative. Indeed, the use of language in the communist regime, for the most part, is focused on political ideology.

North Korea created numerous words or phrases associated with communist, including “Hubidae”(후비대), which refers to the youth group of the Workers’ Party, “spirit of the red flag,” “spirit of the piercing wind of Baekdu” and “Chollima(천리마) movement.” Of course, all these words sound pretty strange to South Koreans.

North Korea uses language as a means of not only communication but also to propagate communist ideology. That’s why some North Korean terms were created for the sole purpose of criticizing capitalism and praising socialism. The use of high-sounding honorific titles when referring to the nation’s leaders can also be understood in this context.

As North Korea stresses the importance of independence and self-reliance, it tries to convert foreign expressions into indigenous Korean words.

North Korea refrains from using foreign words. The North Korean word for hamburger, for example, is roughly translated into “meat-layered bread.” “Smartphone” is expressed as something like “intelligent hand-phone” and netizen, as “network citizen.”

While English words have a strong influence on the South Korean language, Russian is more influential in the North. When referring to “tractor” and “theme,” North Koreans pronounce the words as “tturakttoru”(뜨락또르) and “zzema” (쩨마), respectively. For country names, North Koreans pronounce “Ppolsuka”(뽈스카) for Poland and used “Ceskoslovensko” (체스코슬로벤스코) for Czechoslovakia, which existed until 1992.

North Korea has replaced words containing difficult Chinese characters with pure Korean words. As a result, the South and the North use different expressions even when referring to same things. North Korea maintains that its language has preserved Korean traditions and national identity better than South Korea’s.

But this doesn’t mean North Korea rejects foreign vocabulary outright. In fact, the North Korean language has embraced many Chinese and Russian words. In contrast, the South Korean lexicon includes many English and Japanese expressions as loanwords.

The language differences pose a great challenge for North Korean defectors who resettle here in the South.

Newcomers from the North encounter great difficulty in adjusting to South Korean society, in part due to foreign words. I too was baffled at the many English terms and phrases used by professors while I pursued by doctorate.

In addition to school, North Korean expats often struggle with English words they encounter on the job. For instance, there was one North Korean defector who was told to fetch a key. As she didn’t know what the English word “key” meant, she thought it might be a winnowing basket, which, in Korean, is pronounced the same as “key.” Of course, she didn’t understand why her boss ordered her to bring a winnow basket. Many North Korean newcomers encounter such language barriers in their workplaces.

Professor Chung herself is a North Korean defector. She earned a master’s degree in economics at Wonsan University in North Korea and taught students there. After defecting from North Korea in 2003, she enrolled in a doctorate program in South Korea. She found it was quite challenging to study because English was so commonly used in academia.

She is far from alone. According to a 2014 survey on North Korean defectors by the Unification Ministry, more than 40 percent of respondents cited communication problems stemming from foreign words as one of the reasons that make their South Korean lives difficult. The Korean language used in North and South Korea diverge 34 percent and 64 percent in regular vocabulary and technical terms, respectively.

As part of the efforts to bridge the language gap, the two Koreas have participated in a language compilation project aimed at unifying the Korean language since 2005.

[Professor Chung, who has used both the North and South Korean languages, has high expectations for the joint dictionary. ]

[I believe the unified Korean dictionary will contribute greatly to narrowing the gap in differences in language policies of the two Koreas and restoring linguistic homogeneity. It will surely play a big role in integrating people on both sides of the border and promoting harmony in a unified Korea.]

[The Korean people had long used the same language, but language in the South and North has diverged significantly since the two Koreas were divided. The language barrier is certainly a stumbling block standing in the way of cross-border exchanges and communication.]

The envisioned joint Korean dictionary is now about 80 percent complete. Here’s hoping that the dictionary project will proceed well and the two Koreas will be able to achieve peaceful unification, starting with language.