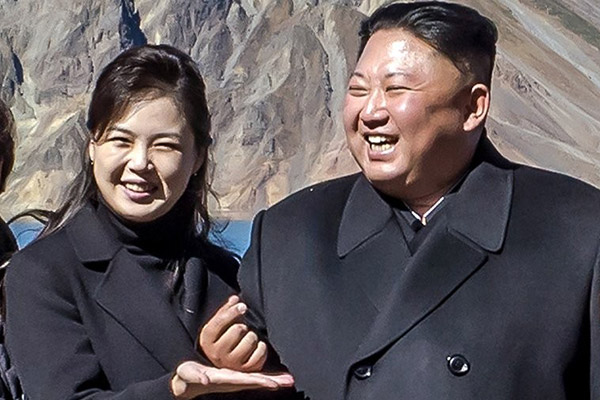 © Office of the President

In this beautiful season of blossoming flowers, many young people are probably dreaming of some heart-stopping romance. A local matchmaking company says that it receives an increasing number of inquiries in May, the season associated with love and weddings here in South Korea. We can’t help but wonder if young folks in North Korea feel the same way during the lovely month of May.

Today, we’ll learn about the dating culture in North Korea with Professor Lee Mi-gyeong at the Institute for Unification Education.

Officially, dating is strictly controlled in North Korea, as romantic relationships may cause a breakdown of discipline in schools or workplaces. Despite the odd regulations, people still seek out romance because it is only natural to fall in love. Recent videos of North Korea reveal that male and female college students show physical affection to each other, while skating at an ice rink. The scenes indicate that young people in North Korea are actually dating freely.

In the past, dating was banned in schools and the military in North Korea, as it was regarded as a product of capitalism and a subversive element that ruins socialism. Those who got caught having a secret date were heavily criticized. University students, in particular, were subject to harsher punishments. They received a warning at first, were suspended or even expelled from school in the next stages. As an exception, men and women were allowed to have a date when they pledged to exceed the scheduled amount of work together or discussed communist ideas.

However, the wind of “free love” began to blow in to the reclusive country as South Korean movies and TV series flowed into North Korean private markets or jangmadang, which emerged after the nation suffered from an extreme economic contraction in the 1990s.

Amid economic difficulties, North Korean citizens had to survive on their own, as they could no longer depend on the state rationing system. It comes as no surprise that the state grip on people loosened. As North Koreans engaged in market activities, they were exposed to outside information or the so-called “yellow winds of capitalism,” which North Korean authorities were highly wary of.

In particular, the popularity of South Korean pop culture overseas, known as the Korean Wave or hallyu, has swept North Korea as well. Enjoying South Korean cultural content including K-pop and films, North Korean residents have changed their perceptions about dating considerably, going as far as to emulate romantic relationships shown in the South Korean dramas.

North Koreans are prohibited from watching South Korean TV programs. But in reality, they enjoy South Korean films and dramas that have been smuggled into the North, using USB storage devices they get at the jangmadang.

North Koreans in their 20s and 30s have naturally embraced love and dating shown in the South Korean films and soap operas. Young people who were born after 1990 are referred to as the jangmadang generation, as they witnessed the expansion of private markets in the North.

Many couples like to follow the way South Korean actors and actresses display affection. They celebrate their 100th-day anniversary in a big way, just as many South Korean couples do. Some North Korean women imitate their South Korean counterparts who call their boyfriend “oppa,” which means “older brother.”

One of the most conspicuous things about Kim Jong-un is that he has often made public appearances with his wife Ri Sol-ju. Also, the young leader’s attitude has been quite open and rather unconventional. He once presented an interesting slogan, “Keep your feet on the ground but turn your head to the world.” Apparently, the leader wanted to show that his country is willing to join international trends and go global. I think these changes in the Kim Jong-un era have greatly influenced the younger generation’s lives and attitudes.

In 2012, Kim and his wife Ri Sol-ju attended the Moranbong Band’s performance at the Mansudae Art Theater in Pyongyang. It was the first time ever that a North Korean first lady appeared at an official event. Afterwards, the leader was often seen walking arm in arm with his wife—a scene that had never been shown during the years of his predecessors. This new and bold approach is certainly aimed at underlining North Korea’s normalcy.

The natural display of physical affection by the leader and his wife are influencing young people in the North. These days, it is common to see young couples walking arm in arm. Professor Lee now talks about popular places young couples like to hang out.

North Korean movies or dramas show scenes of couples enjoying their dates along the Daedong River in Pyongyang. I actually saw men and women walking hand in hand along the Daedong and Botong Rivers. These days, couples go to various places like theme parks and ice rinks. They also enjoy roller-skating at Kim Il-sung Square in central Pyongyang.

In many cases, classmates, co-workers or relatives set their acquaintances up on a blind date. Young couples visit riverside parks, resort areas or theme parks to take a stroll or go boat riding. They also go to the movies together.

Those in power and the rich enjoy “Pyongyang-style date,” in which they go swimming, billiards, bowling and skating or play table tennis at entertainment facilities. The “Youth Central Hall” in eastern Pyongyang has various facilities including a video game room and a cinema so couples can sing and dance.

As more and more people in North Korea go on dates, a growing number of couples are marrying for love. Today, more than five out of 10 couples prefer a love marriage, and more than half of the couples who met though a matchmaker choose to date for a certain period of time before actually tying the knot.

The changing perceptions of dating are also affecting women’s view of marriage. In the past, marriage was considered to be a must. But an increasing number of women have become financially independent and hold the purse strings while experiencing economic hardships. As a result, many women now choose to marry late or stay single.

During the severe economic downturn in the mid-to-late 1990s, known as the Arduous March period, men had to go to work even if they had nothing to do. They were reluctant to work at private markets because they thought it was the act of losing face. Therefore, it was women, mostly, who performed market activities. They soon became the breadwinner of the family and realized that they didn’t really have to get a husband or stay married.

In the old days, women took it for granted that they should get hitched and have children when they reach a certain age. North Koreans overall had a strong belief in this tradition. But that’s not the case anymore, as a growing number of women are conducting economic activities and supporting their family.

Previously, North Korean women were responsible for childcare and household chores. During the harsh Arduous March period, they worked at the jangmadang, carrying their children on their backs, and prepared meals and cleaned the house after returning home.

However, these days many women tend to get married rather late, while the divorce rate is rising, as more and more women are becoming self-sufficient and assuming the role of the wage earner in the family. Indeed, a change in politics and the economy is influencing the dating and marriage culture in North Korea.