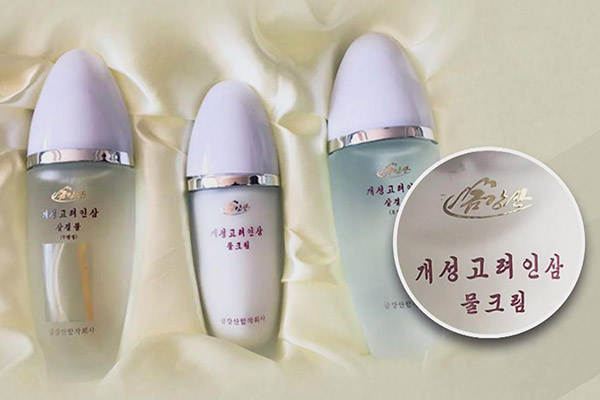 Pyongyang has for years stressed the need to be self-sufficient in production, and this extends to the cosmetics industry as well. In March, state propaganda network television aired a scene in which a woman replaces imported cosmetics on a table with domestically-made ones. The state is clearly trying to promote domestically manufactured goods, but how good are North Korean cosmetics in reality? Today, we’ll talk about recent efforts to promote the domestic cosmetics industry with Professor Jeon Young-seon at the Institute of Humanities for Unification at Konkuk University.

North Korean state media, including the Rodong Sinmun newspaper and some broadcasting programs, have actively promoted local cosmetics, emphasizing that they are just as good as foreign products. One of North Korea’s economic strategies is to intensively develop relatively competitive industries such as foodstuffs, clothes, liquor and cosmetics. The nation is making a lot of effort to improve the quality of those products. One cosmetics factory is even equipped with an unmanned production system. North Korea believes that it has a competitive edge in natural-based beauty products, such as those made with ginseng, in particular.

Under a long-standing ideological principle of self-reliance, North Korea has stressed the importance of creating things by itself for decades. This has take on new urgency, however, as international sanctions have been tightening in recent years. During North Korean leader Kim Jong Un’s 2014 New Year’s speech, officials were instructed to modernize factories manufacturing light industry goods and to produce raw materials locally. In 2015 and in 2017, Kim conducted on-site inspections of the Pyongyang Cosmetics Factory, which is known to produce beauty products under the brand “Unhasu,” meaning “Milky Way.”

Apparently, the cosmetics industry push is part of a larger strategic move to build a sustainable economic system and clamp down on possible public unrest due to poor economic metrics and restrictions brought on by sanctions. But there are greater implications for North Korea’s growing cosmetics industry as well.

In the past, wearing light makeup was a matter of etiquette for North Korean women, and heavy or colorful makeup was regarded as indecent. The party would present cosmetics to women as a special gift on March 8 International Women’s Day and to women when they got married. In other words, beauty products carried political significance as a symbol of the benefit from the party and the regime leader.

Formerly, North Korean women refrained from applying heavy makeup and focused more on basic skin care. But things began to change under Kim Jong-un’s rule. His wife, Ri Sol-ju, and his younger sister, Kim Yo-jong, have influenced trends in fashion and personal care for North Korean women. Along with the appearance of these high-ranking and stylish women, the strong purchasing power of a rising class of wealthy individuals, known as donju, or ‘new rich’, along with less rigid social norms have contributed to generating greater public interest in personal beauty care.

In line with changing perceptions about makeup in North Korea, cosmetics brands have diversified. Previously, the concept of “competition” did not exist in the communist North. But the nation has experienced a lot of changes since the introduction of a new economic management system in the mid-2010s. Under this “socialist system of responsible enterprise management,” the government relegated planning, production and employment to the managers of state-run enterprises.

In the past, there was only one cosmetics brand called “Spring Scent” in the North. But during the reign of Kim Jong-un, the Pyongyang Cosmetics Factory built a fully-automated system to manufacture the Unhasu brand, in addition to the existing Spring Scent produced by the Sinuiju Cosmetics Factory. Other new brands include high-end cosmetics “Geumgang Mountain” and the Myohyang(묘향) Cosmetics Factory’s brand “Mirae.”

North Korea sought to establish a domestic cosmetics industry as early as the 1940s. A cosmetics factory was set up in the northwestern border city of Sinuiju in 1949 and another in the capital of Pyongyang in 1957.

The factory in Sinuiju, the oldest and largest cosmetics factory, has grown into a symbol of North Korea’s beauty industry. Kim Jong-un, as well as his predecessors Kim Jong-il and Kim Il-sung, visited the factory several times. The Sinuiju Cosmetics Factory’s best-known brand, Spring Scent, is made of natural medicinal herbs and is easy on the skin. In fact, there likely isn’t a North Korean citizen that doesn’t know Spring Scent.

However, these days it is Unhasu that draws much attention. The Pyongyang Cosmetics Factory-made product represents a significant shift from the monopolization of the market by a single brand to a more competitive system that has led to diversification of consumer products.

With a variety of new products, North Korean women now have a wider choice when selecting cosmetics. Competition prompts different brands to map out their own sales strategies. The traditional brand of Spring Scent underlines its various cosmetic lines and functional products, while Mirae specializes in color makeup, which I think targets the younger generation. North Korea is also developing functional or hypoallergenic products for acne treatment and cosmetics using nanotechnology.

The Sinuiju Cosmetics Factory mostly produced goods using natural herbs, including ginseng, in the past, but it has recently expanded into a wide range of products including whitening agents and anti-aging personal care products. Meanwhile, the new brand Mirae appeals to young women with intense colors and a more classy image.

Cosmetics show a change under the current Kim Jong-un regime in a political, economic and cultural way. North Korea has always underlined the need to build a ‘civilized’ socialist country. During the years of former leader Kim Jong-il, the slogan for creating a civilized socialist country was “Let’s work hard and build a great society.”

But in the era of Kim Jong-un, the keyword for the same goal is “enjoy.” This is the most notable difference from the previous era. Diversified cosmetic brands evaluate themselves to make better products in the course of competing with each other. This is a remarkable change, indeed. North Korea is nurturing cosmetics as an export item in the belief that they will prove highly competitive, reflecting a change in the nation’s economic policy as well.

A characteristic of the Kim Jong-un regime’s development strategy is “choice and concentration.” By shifting its focus from heavy industry to consumer goods and the service industry, North Korea seeks to sharpen its competitiveness and explores the possibility of exporting relevant products.

North Korea encourages the production of cosmetics, which, in a sense, could be regarded as signs of emergent capitalism. We’ll have to wait and see if this policy shift will lead to a change in North Korean society overall.

(Next time, we’ll talk about traveling culture in North Korea.)