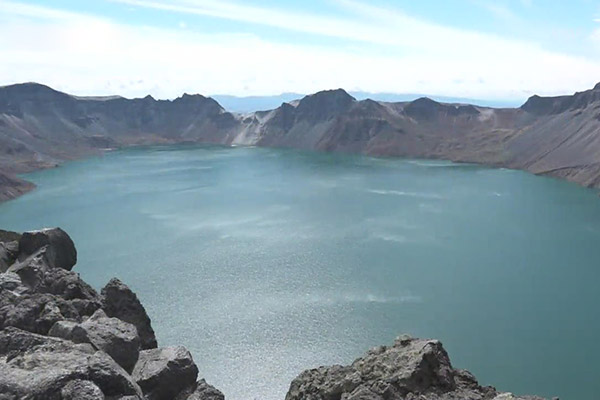 May is known as family month here in South Korea. A variety of events and festivals are held all across the country, when the weather is perfect for outdoor activities. Not surprisingly, on weekends throughout May, major highways and expressways are packed with cars. We can’t help but wonder if people in North Korea also enjoy traveling. In today’s installment of Inside North Korea, we’ll talk about the traveling culture in the North with Professor Chung Eun-chan at the Institute for Unification Education.

Basically, freedom of movement or the right to travel should allow people to go wherever they want without any restriction. But citizens in North Korea generally cannot freely travel around the country. Those who want to enter the capital of Pyongyang must first be given a special approval number and then a travel certificate. Other restricted parts are the northern regions bordering China and the southern areas bordering South Korea, including Gaeseong. Those who hope to travel to those regions for personal reasons, like visiting their relatives, must also receive the special number and certificate.

North Korea’s Constitution stipulates that citizens have freedom of residence and travel. But the reality is quite different. North Korean citizens cannot freely travel even inside their own country, not to mention travel abroad, since the authorities control the movement of people in various forms such as a travel order and accommodation registration. If a person violates the travel order, he or she is subject to a fine or unpaid work for less than three months under administrative law. A law clause authorizes a security organization to clamp down on any violation of the travel order and accommodation registration. It’s fair to say that there is no freedom of movement in North Korea. Citizens must receive a travel certificate to travel to any region.

The travel certificate is one-fourth the size of an A4-sized piece of paper. The phrase “business trip” or “trip” is written on the certificate. It also has the traveler’s name, birth of date, address, travel destination, travel period and the permission stamps of the police in the region where he or she resides. The certificate is, in effect, a means of controlling the movement of the people. Even if they get permission to travel to other regions, they must return home within 90 days.

Those who hope to travel to Pyongyang, northern border regions like Musan in North Hamgyeong Province and Hyesan in Ryanggang Province, and southern border regions such as Gaeseong and Hwanghae Province go through quite a complicated process of getting a special approval number. First, they must fill out the application and get permission stamps from four or five officials before submitting the application to the second department of the local police. After checking the application, which includes specific travel purposes, the department issues an approval number. But if any of the four or five officials disapproves, the certificate is not issued. So, the difficult procedure often forces citizens to give up traveling even if their parents or relatives die or they arrive late after the funeral is over.

Most North Korean residents live in their hometowns or neighboring regions for their whole lives, except when they go to institutions of higher learning, serve in the military, get married, and when they leave home temporarily to visit relatives or conduct business. The North’s citizens just can’t imagine traveling for leisure or enjoying culture.

However, the strict travel certificates didn’t work well when the North suffered an extreme economic contraction in the 1990s, commonly known as the Arduous March period.

During the period of severe economic troubles in the mid-to-late 1990s, many North Koreans dared to move from place to place by train without travel certificates because they had to earn a living. At the time, police or security officials tended to turn a blind eye to the violations. Some people colluded with the regional police to get their travel certificates issued illegally. The practice continues to this day, as many North Koreans, especially those engaging in market activities, use their personal connections with officials and pay bribe them to get their travel certificates rather than follow formal procedure.

During the period of economic difficulty, many North Koreans had to leave their regions by train in order to get food or sell items at private markets or jangmadang. The authorities could hardly punish people for not having travel certificates, as they had to move around to feed their starving family members. As the jangmadang spread, merchants began to bribe officials to get certificates and freely traveled to different regions.

While North Korea restricts movement for its people, it still tries to attract foreign tourists.

A report shows that North Korea earns about 68 million US dollars in tourism revenue a year. The North has actually developed various tours in an effort to draw more foreign visitors. In Pyongyang, foreign tourists typically visit the statues of former leaders Kim Il-sung and Kim Jong-il, different kinds of monuments, a triumphal arch, Kim Il-sung Square and the Kumsusan Palace of the Sun, where the bodies of the two former leaders lie in state. The tourists may also look around subways in the capital. Tour courses may vary, depending on whether they include all these destinations or not.

Of course, the North strictly controls the movement of foreign visitors inside the country. But people all around the world, except those in South Korea, can travel to North Korea if they want. Even U.S. citizens can visit the reclusive country.

A travel agency promoting North Korean tours opened in the Russian capital of Moscow in 2017 and advertisements for North Korean hotels have appeared on TripAdvisor, the world’s largest travel site.

Popular tourist destinations in North Korea include Pyongyang, the eastern coastal city of Wonsan, Mt. Geumgang and the border town of Gaeseong. Among them, the capital of Pyongyang is said to draw the largest number of foreign tourists.

Unfortunately, citizens in South and North Korea are not allowed to travel freely across the inter-Korean border, except on official business. But after the inter-Korean summit in Pyongyang last September, many South Koreans began to cherish the hope that after Korea is unified they can visit famous tourist attractions on the northern side of the border, including Mt. Baekdu.

Before that happens, there are a number of challenging tasks to contend with, such as North Korea’s denuclearization, the lifting of international sanctions on the North and the normalization of relations between Pyongyang and Washington. But people in both Koreas still envision a bright future when they can freely travel around the entire Korean Peninsula by car, train or plane and even go all the way to Europe using the Eurasian railroad network that could be connected with cross-border railways on the Korean Peninsula.