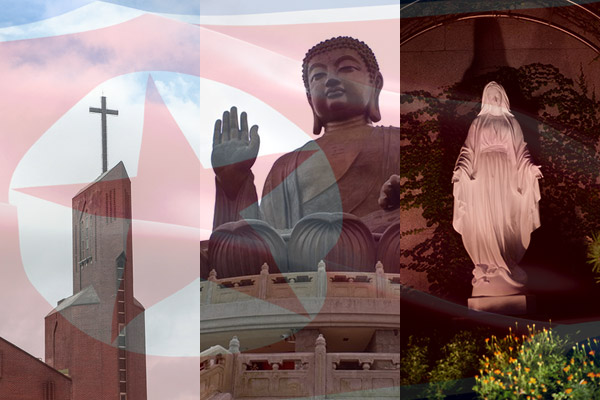 South Korean President Moon Jae-in delivered a message from North Korean leader Kim Jong-un to Pope Francis when Moon met the pontiff at the Vatican in October last year. In the message, the North Korean leader invited the Pope to visit Pyongyang. The invitation drew much attention, as a Papal visit to North Korea may signal a positive change in the reclusive state.

The invitation raises the question of the state and nature of religion inside North Korea. Today, we’ll talk about religion in North Korea with Professor Chung Eun-chan at the Institute for Unification Education.

Clearly, freedom of religion is a guaranteed right for North Koreans, at least on paper.

Before 1945, in fact, the northern half of the Korean Peninsula was quite receptive to Christianity. Sorae Church was founded in Hwanghae Province in 1884 as the first Protestant church in Korea. A Benedictine monastery in Tokwon, South Hamgyeong Province was, for a time, the largest of its kind in Northeast Asia. North Korea’s capital city of Pyongyang was even called the “Jerusalem of the East.”

In the late 1940s, after Korea’s liberation from Japanese colonial rule, an estimated 22 percent of the total population in the northern part of the Korean Peninsula were actively religious. Historical records suggest that there were 1.5 million followers of an indigenous religion known as Cheondogyo, meaning the Religion of the Heavenly Way, 375-thousand Buddhists, 200-thousand Christians and 57-thousand Catholics in the North.

After the Korean War in the early 1950s, however, freedom of religion, in effect, disappeared.

During the years of North Korean founder Kim Il-sung, religion was described as the “opium” of the people. Apparently, it was believed that religion might destroy the nation’s ideological, political and social foundation that props up the regime. In the course of building totalitarian one-man rule in North Korea, religion has been regarded as something that runs against the state’s juche or self-reliance ideology and something that should be tightly controlled.

Let me cite some interesting statistics. Adherents.com, a website that collects information on religious demographics, announced a list of the ten major religions of the world in 2007. Christianity ranked first, as you may expect. But guess what? Juche came in tenth. Of course, Juche here refers to North Korea’s national ideology on political, economic and military self-reliance. At the time, statistics showed that there were about 19 million believers of Juche.

North Korea believes that religion violates its Juche philosophy, which is the most important governing ideology of the communist nation.

North Korea sought to maintain the regime by strengthening Kim Il-sung’s one-man leadership and deifying and worshipping the Kim family. Religion was and is considered a risk to the regime and also represents a dangerous channel through which information of the outside world may enter North Korea.

North Korea brutally purged religious adherents and seized religious assets such as churches and cemeteries. As a result, all organized religion was effectively wiped out by the 1960s.

However, there were apparent signs of change about a decade later.

After inter-Korean dialogue began in 1972, North Korea became more open to religion. In 1989, the North created the department of religion at Kim Il-sung University, the nation’s most prestigious school of higher learning, to nurture religious people. The department is gone now, though. In 1972, the Pyongyang Institute of Theology opened, and despite some temporary closures remains open today.

It also allowed religious groups to provide training to would-be pastors. In 2003, a North Korean religion committee sent some students to the Moscow Ecclesiastical Seminary to train them as priests of the Russian Orthodox Church.

North Korea revived and promoted organized religion in the 1970s, even fostering a domestic religious community.

But these measures were, in fact, aimed at making the outside world believe that North Koreans can exercise the right to freedom of religion. In reality, religious groups in the North are strictly controlled by authorities. Their roles are limited to receiving aid supplies or facilities while conducting cooperation projects with religious or civic groups in other countries.

Building religious buildings is prohibited, other than in designated areas. In 1988, Jangchung(장충) Cathedral and Bongsu(봉수) Church were set up in Pyongyang. The following year, Chilgol(칠골) Church was created in the capital. Kim Il-sung’s mother was Kang Ban-sok(강반석). Ban-sok means “rock” in the Bible, like in “my Rock and my Redeemer.” She was a devout Christian. It is said that Kim Il-sung would go to church, holding his mother’s hand, when he was little. Chilgol Church was established in the site where the church Kim attended had been located.

All Buddhist temples in North Korea, including Bohyon(보현) Temple at Mt. Myohyang(묘향), have been designated and registered by the government. Religious adherents in North Korea may go to religious facilities individually, but most are reluctant to do so, for fear of criticism or persecution.

In the 2017 White Paper on Religious Freedom in North Korea released by the Database Center for North Korean Human Rights, 99 percent of some 11,800 North Korean defectors surveyed said that North Koreans are not free to practice religion.

In North Korea, Christians are persecuted more severely than followers of any other religion. Christians are often sent to political prison camps or stand trial in public. Although the constitution does guarantee freedom of religion in principle, believing or practicing any religion is regarded as an act of violating the constitution and social order. That’s why the North Korean regime punishes individuals who express their religious beliefs.

In 2018, the U.S. State Department designated North Korea as a “Country of Particular Concern” under the International Religious Freedom Act for the 17th consecutive year. Also in 2018, members of the European Parliament included North Korea on a list of countries where freedom of religion is severely violated.

The international community remains deeply concerned over the absence of freedom of religion and persecution of religious individuals inside North Korea. We wonder if Kim Jong-un’s invitation to Pope Francis to visit North Korea signals a possible change in how religion is perceived by the state.