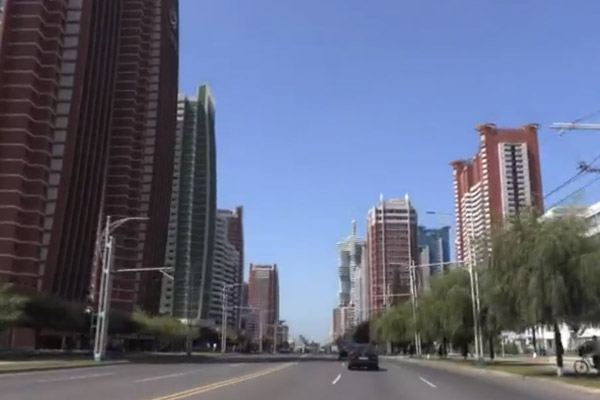 People have the right to lead a comfortable and stable residential life, and all nations work to provide its people with an adequate housing environment.

In 2016, South Korea’s housing penetration rate, which measures the ratio of the number of households to the amount of housing available, reached 103.5 percent and the average living space per person was 31.2 square meters. While there are still poor residents who live below the minimum housing standards, there is actually no absolute shortage of housing in South Korea.

So then, how is the housing situation in North Korea? Let’s hear from Professor Chung Eun-chan at the Institute for Unification Education.

Socialist North Korea does not acknowledge private property ownership. Accordingly, all land, houses and buildings are owned by the state. Private ownership is partly allowed and it is limited to earned income and some household items. In principle, all housing is provided by the state.

North Korea classifies all residents into three different groups: a loyal “core class,” a neutral “wavering class” and the bottom group of “hostile class.” Those who belong to the core class are given nice houses, while many of those from the hostile class live in remote areas, to which they were forcibly relocated. They usually live in very small houses—a place that cannot be called a house—with inadequate supplies.

North Korea applies the rationing system to housing. The state has ownership to houses, and citizens only have the right to live in free houses provided by the state and pay usage fees.

Sizes and types of houses vary according to class. The core class is offered fine houses, while homes with deficient facilities are assigned to the wavering and hostile classes. People are also given different houses in accordance with their jobs and positions.

In the mid-1990s before North Korea was hit by a massive famine, many party officials lived in Changgwang(창광) Street in Pyongyang. The street was known for luxury apartments, with each unit having two to three bedrooms.

Many workers in Pyongyang live in a house that accommodates two families. Workers in provincial areas live in a place called “harmonica house,” a building divided into four to five small living units. It earned the name because it looks like a harmonica when viewed from the front. Toilets are located outside and shared among multiple families. In farming areas, two households may live in one place and sizes of single-family houses vary.

Each unit of the “harmonica house” measures about 36 square meters. Middle-or higher-ranking officials live in an apartment with two to three bedrooms. Famers are usually provided with single-family houses with one or two bedrooms. But this housing distribution system has been changing.

North Korea couldn’t afford to build houses for about ten years due to its economic difficulties. As a result, the housing market in the nation is in short supply, compared to demand.

As part of efforts to resolve the problem, North Korea has unveiled various policies. In 2003, markets were introduced in the communist nation. In 2012, right after Kim Jong-un came into power, a new economic management system began to allow state enterprises to build houses on their own without government support. In 2014, the nation introduced another economic system that significantly reduced state control of the economy. Under the system, managers of state enterprises are allowed to provide incentives to their workers to maximize labor productivity. Even though the state cannot afford to provide construction materials to enterprises, they still can build houses by using individual funds.

According to 2015 research by South Korea’s Land and Housing Institute, North Korea is estimated to be able to house about 60 to 70 percent of its population.

North Korea experienced an extreme housing shortage in the 1980s when the baby boom generation started to get married. North Korea’s severe economic hardship in the mid-1990s, known as the “Arduous March” period, led to the collapse of the nation’s housing distribution system as well as food rationing.

As the state rationing system fell apart, North Korean people formed marketplaces for their survival. The authorities had no option but to recognize the markets, which began to grow quickly.

The North Korean government couldn’t meet rising housing demand, either. It allowed state enterprises to construct and distribute houses, and the enterprises unofficially sold some houses to individuals to secure necessary funds. In this way, individuals were allowed to participate in housing construction. The change has created a real estate market in North Korea.

Of course, the authorities crack down on real estate transactions, which are illegal in principle. Those who violate regulations are subject to punishment. Since it is a matter of survival, though, officials usually turn a blind eye to real estate businesses.

In North Korea, houses are built in various ways. In some cases, the state is responsible for providing construction materials and paying relevant costs. In other cases, houses can be constructed through both public and private investment or only through individual investment in the name of construction enterprises.

Real estate development is still illegal in North Korea. But in 2013, new enterprises appeared with the purpose of collecting funds from individuals to provide houses. The individual investors receive houses in return, and they buy and sell houses.

The transactions gave rise to a sudden rise in housing prices and real estate speculation. According to the Korea Trade-Investment Promotion Agency’s trade office in Shanghai, the price of a luxury vacation house in Pyongyang is set at 8,000 US dollars per square meter. The office also says that the real estate market is rapidly growing in large cities in North Korea such as Nampo, Gaeseong and Chongjin. Professor Chung says some areas highly coveted.

Before the economic difficulties, North Korean people preferred to live in houses in cities or counties and those close to stations and schools. Of course, they couldn’t live in places they wanted but had to reside in areas designated by the state.

Since the 2000s, however, more and more people have turned their eyes to apartment buildings with good facilities in large cities. Areas close to schools are still popular and some people are willing to move to places around foreign embassies that have a Wi-Fi connection.

Real estate hot spots in North Korea include places full of high-rise apartment buildings like an 82-story residential building in Pyongyang’s Ryomyong Street that was built in 2017.

Popular regions also include university areas where landlords can earn money by providing lodging to students. Students in North Korea have to live in school dorms unless they reside nearby. But schools find it increasingly difficult to operate dorms due to economic difficulties, resulting in a rising number of students seeking lodgings.

Many North Korean citizens also opt to live in areas close to foreign embassies and markets. It is fair to say that a real estate market, in effect, has been formed in the communist North.

So, is it possible for South Korean construction companies to build houses in North Korea when the two Koreas expand cross-border economic cooperation?

In 2014, the Hyundai Research Institute announced 12 most promising businesses in a unified Korea, and construction topped the list. South Korean construction firms may enter North Korea if inter-Korean relations improve.

But the question is whether the North Korean government will authorize them to freely sell the houses they built to local residents. To make this happen, North Korea should take a set of economic measures of reform and openness. Private ownership to housing, for example, should be recognized to some extent. The reform measures should first take firm root within an institutional framework.

In the process of overcoming economic difficulties, the real estate market is growing fast in North Korea. If the trend continues, the local housing market could prosper through the combination of North Korea’s labor and South Korea’s capital and technology. For this type of inter-Korean economic cooperation, North Korea’s closed economy should first follow a path of reform and openness based on economic principles.