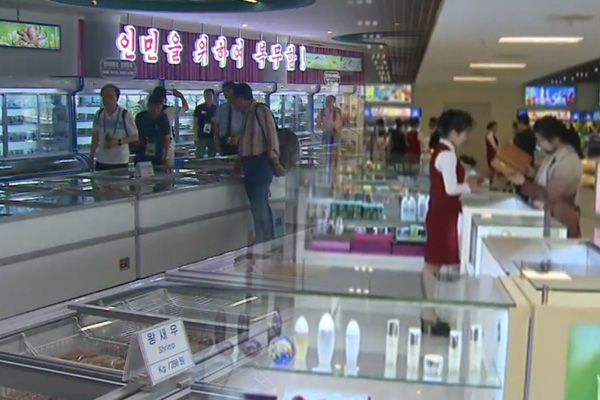 Last week, we learned why private markets or jangmadang emerged in North Korea and how they work. Markets continue to proliferate across the communist country, with some 400 state-approved marketㄴ and countless unregistered ones. These places of commerce are bringing about major and meaningful changes to North Korean society, creating a new service culture as well as the so-called jangmadang generation and a new wealthy class called donju. In today’s installment of Inside North Korea, we’ll talk about the various changes brought on by the jangmadang in the North. Let’s hear from North Korean defector Chung Si-woo, who had firsthand experience with North Korean markets as recently as 2017.

As the jangmadang have grown significantly in North Korea, commodity transactions and distributions are pretty common now. North Korean people are increasingly aware of a market economy and the mechanics of capitalism. In brief, jangmadang markets have completely changed the economy. Consumers in the North can even have their purchases delivered. They pay for their goods at a market and write down their addresses and phone numbers. They ask vendors to deliver the goods to their home at a preferred time. Delivery workers then carry the things on their backs or load them onto bikes or handcarts to deliver them.

Market activity has become common in North Korea, with as many as 1.8 million engaging in market transactions in a given day. It is easy to imagine, then, that delivery services arose as a product of capitalistic competition.

Now, 80 to 90 percent of North Korean residents procure their daily necessities at markets. The jangmadang have also give rise to a new class of private investors, known as donju in North Korea. Cho Bong-hyun, vice president of the Economic Research Institute at the Industrial Bank of Korea, explains this new group in more detail.

The donju are North Korea’s new class of wealthy capitalists that are the driving force behind the jangmadang. In the past, everything was strictly controlled under the North’s centrally planned economy, so only party or government officials were able to accumulate resources.

As the jangmadang grew to form a market economy, however, some private individuals have made a fortunate by leveraging their ties to North Korea’s elite class and facilitating trade, real estate, and business deals. These people are called donju, and it is estimated that there are hundreds of thousands of them in North Korea.

Translated as “masters of money” or “money owners,” donju began to emerge in a period of severe economic contraction and nationwide famine in the mid- to late-1990s, known as the Arduous March. It was during this time that North Korea’s food rationing system collapsed, and the state could no longer provide basic goods to the people. The North Koreans needed to secure food on their own, giving rise to the jangmadang.

Against this backdrop, the donju were able to capitalize on the dire situation and make a lot of money in the process. Beginning in the jangmadang markets, this new generation of capitalists have since expanded their economic activities inside North Korea.

The donju are investing not only in markets but in other sectors of the economy as well. Due to the lack of capital, North Korean authorities have sought donju funding for economic projects, allowing these wealthy capitalists to invest in real estate, distributing, and construction projects. Apart from commodity transactions and property development, the donju also engage in financial activities in the form of money lending. As banks do not function properly in North Korea, people usually borrow money from rich individuals, who are none other than the donju. In North Korea, it is difficult for individuals to earn money solely through merit. People who hope to make money must have connections with those in power. The rising donju class have now become powerful enough to wield influence over North Korean government authorities.

The donju accumulate wealth through lucrative investment in a wide array of businesses from private buses and taxies to money lending and housing construction. Since current leader Kim Jong-un came to power in 2011, the donju have been seen as the principal drivers of the nation’s accelerated embrace of a market economy and privatization. It is said that the contours of the North Korean economy follow the flow of donju investment and capital.

Becoming the primary engine for people’s livelihood some two decades ago, the jangmadang are responsible for huge cash flows in North Korea. This remarkable change from state-directed consumption to wholly private market forces have had a tremendous effect on the younger generation of North Koreans that don’t remember a time without the jangmadang.     Let’s hear again from Mr. Chung, who was born in Pyongyang in 1991.

As a member of the jangmadang generation, I’d say that in any society, money makes man and not the other way around. More and more young people in North Korea are thinking that way. Even in a socialist state, only rich people can be treated well. That means even children of high-ranking party officials might be powerless if they don’t have money. And most of them are reluctant to earn money independently in favor of inheriting their parent’s occupations after receiving the proper education.  Conversely, children from middle-class families are greatly interested in making money as many of them aspire for a better life and personal enrichment. Many young people in their 20s are engaged in a number of business ventures, from restaurants to coal mining to transportation services.

The jangmadang generation did not grow up accustomed to support from the state due to the collapse of the public distribution network.

Much of their childhood was spent in periods of food shortages and economic hardships, and thus loyalty to the regime is relatively weaker than generations past.

When the jangmadang generation were little, they would often head to markets instead of schools in order to sell things for their own survival.

In the process, they were exposed to the dynamics of a market economy, and they developed a greater interest in money than in ideology.

As a growing number of young people are becoming successful businesspeople, like Mr. Chung, who ran a table tennis facility and invested in a bread factory in North Korea, they are inspiring the jangmadang generation to get into business themselves. Here again is Mr. Chung.

Younger people can start their own businesses easily if their parents support them financially. But those from poor households find the money for their business by working part-time. Part-time jobs may include washing cars, loading and unloading things, and delivering goods.

Washing cars is a tough job. Part-timers typically work from 7 in the morning till 9 in the evening. There are so many cars to be washed that they can’t take a break even for a minute, and food breaks are taken extremely briefly. But such can yield earnings of up to 50-thousand North Korean won, or more than 5 dollars a day. Considering that the average monthly salary of North Korean laborers is less than 1 dollar, 5 dollars a day is a tremendous amount of money.

Some in the jangmadang generation use the money they earned themselves to start wholesale, retail or service businesses, while others engage in technology-related businesses using North Korea’s intranet, a type of internal network. For example, some young businesspeople sell things on Manmulsang, an online intranet shopping platform. Meaning “general store,” Manmulsang is a sort of North Korean version of Amazon.com, where thousands of items, including shoes and electronic devices, are available for purchase. In this way, the jangmadang, the invisible hand that guides North Korea’s growing economy, has changed the patterns of economic activities in the nation.

Today, North Korea’s economy would be difficult to sustain without a market economy.

With this in mind, some analysts have expressed optimism that economic cooperation between South and North Korea, as well as North Korea’s reform and openness, will gain big traction if and when cross-border tension is eased. Indeed, the jangmadang are at the center of a fast-evolving North Korea.