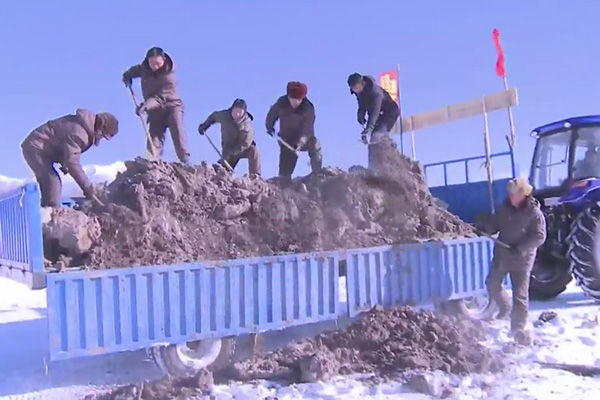 For much of history, Korea and East Asia followed a lunisolar calendar made up of twenty-four solar terms. Gyeongchip, translated as the ‘Day of Awakening from Hibernation’, refers to the third such term.

Gyeongchip fell on March 6 this year. At this time of year, farmers prepare for the busy months ahead, repairing farming equipment, furrowing soil and prepping seeds for planting. So, what is farming in North Korea like? Today, we’ll discuss North Korean agriculture with Professor Chung Eun-chan at the Institute for Unification Education.

Not unlike South Korea, North Korea holds a traditional belief that agriculture forms the basis of national existence. In agriculture, North Korea’s major goal is to feed its people on its own.

About 60 percent of North Korea’s total population lives in cities and some 36 percent live in farming communities. North Korea produced less than 5 million tons of grain in 2018. But the North needs at least 5.5 million tons to meet the domestic demand for food. Indeed, the nation faces chronic food shortages. Agricultural output is not enough to fulfill the country’s sustenance goals.

But the nation’s agricultural infrastructure is rather poor. Irrigation facilities are inadequate, so local farmers can’t secure enough water for agricultural use.

North Korea is also short of chemical fertilizer, which is needed to increase agricultural productivity. Due to chronic food shortages, the North Korean state promotes so-called “agricultural battles” throughout the year.

North Korea often carries out nationwide campaigns, which it calls “battles”, in which it mobilizes people for state projects. Such annual campaigns include the “rice planting battle,” the “weeding battle” and the “harvesting battle.” In the winter season, North Koreans are mobilized for the “fertilizer battle.”

The nation uses these campaigns to boost production output. It also serves to focus the attention of the population and discourage what the regime would call ‘deviation’ from society. In other words, North Korea seeks to maintain the regime by binding people together and controlling them through such campaigns.

In spring, North Korean farmers hold a so-called tractor launching ceremony, in which they show that they are ready for the farming season by repairing and showing off their tractors, which had been idle during the winter. Right after the ceremony, they plow the fields and transport fertilizer, signaling the start of the year’s farming.

In the busy farming season of May and June, people participate in rice planting and weeding “battles.” In autumn, they take part in a harvesting “battle.” In winter, they send fertilizer collected from their companies and regions to farming villages. The seasonal activity is called the fertilizer battle. These campaigns are aimed at mobilizing the people’s efforts and resources.

State socialism in North Korea is composed of state ownership, cooperative ownership and limited private ownership. Farmlands are owned by the state or collective farms. The government is responsible for everything related to state farms, including farming tools and management. Simply put, state farms are like state-run companies. Farmers at state farms receive their monthly salary and food rations, while those at collective farms are paid in kind once a year.

In 1946, right after Korea’s liberation from Japanese colonial rule, North Korea confiscated land formally owned by the Japanese as well large landowners and redistributed it to laborers and tenants. The nation then collectivized farming in the 1950s. Since then, private land ownership in North Korea was eliminated, with buying and selling of land made punishable offenses. As of 1997, collective farms took up more than 90 percent of all farming areas. Farmers working at collective farms received a year’s supply of food as their share after harvesting. But the situation is evolving.

In the past, farmers produced crops at collective farms for the government Farmers were then given their share in late December or January. These days, however, the government takes some 30 percent of the food produced, on the grounds that farmers use the farmland and agricultural equipment, while collective farms can use some 40 percent of the yield and manage it themselves autonomously. The farmers are allowed to keep remaining harvests so they can make a living themselves. The system is designed to motivate farmers to work harder and give greater autonomy to collective farms.

After North Korea suffered a massive famine in the 1990s, the nation carried out agricultural reform to boost productivity. The change accelerated especially after Kim Jong-un came to power. In 2012, the North introduced a reform measure to resolve its chronic food shortages. Under the new system, authorities divided up collective farms and allocated fields to smaller group units consisting of three to five people each. Previously, groups of 20 to 25 people were assigned to work at the farms. Under the family-unit farming, farmers were allowed to keep and sell any surplus after they fulfilled certain quotas.

Earlier, in 2003, food trade was officially approved in general markets in North Korea, helping improve supply and demand of food to some extent.

The food situation has become a lot better compared to the mid-1990s. During the so-called Arduous March period, the government could no longer distribute food to the people. As a result, countless people starved to death. During and after the devastating food crisis, the North Korean people realized that they had to survive on their own. They felt the need to do anything they could—selling things at private markets, cutting wood on mountains, farming, smuggling or whatever.

In the process, more and more people have been able to solve the food problem through various means independently. In contrast, the North Korean government’s centrally planned economy failed to modernize its state food distribution system that for much of the country’s history provided most of the food consumed by the North Koreans.

After collective farms – the core foundation of North Korea’s agriculture sector -adopted elements of a market economy, the food situation has improved.

Nevertheless, North Korean agricultural output is far below optimum levels. The U.S.-based International Food Policy Research Institute assesses that North Korea’s land productivity is the same today as it was in the 1990s. The U.N. announced early this month that North Korea recorded its worst harvest in more than a decade last year, yielding just under 5 million tons of grain.