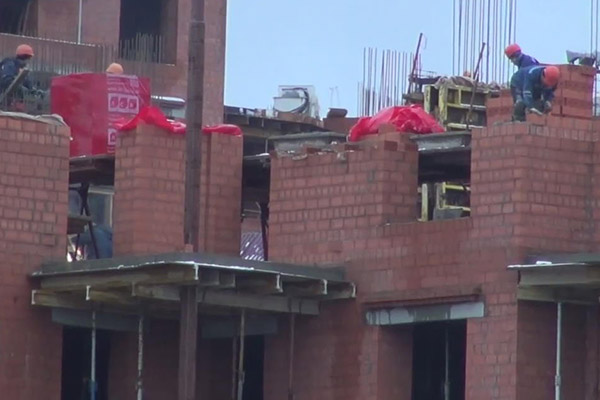 Spring is typically a busy recruitment season for new employees at many major companies and public agencies in South Korea. However these days, jobseekers –particularly young ones – find it increasingly difficult to find employment. They spend more than four hours a day on average searching for jobs and preparing the necessary documents to apply.

So, how tight is the job market in North Korea? In today’s installment of Inside North Korea, we’ll look into labor conditions in the communist North with Professor Cha Mun-seok at the Institute for Unification Education.

In Article 2 of North Korea’s Socialist Labor Law enacted in 1978, labor is defined as something sacred and honorable. In principle, all able-bodied North Koreans over the age of 16 are obliged to work until 60 or 55, the retirement age for men and women, respectively.

On paper, the employment rate in North Korea is 100 percent, as the law stipulates that every citizen has the right and the duty to work. However, North Koreans do not search for jobs the same way that most others in the world do.

North Koreans don’t have a choice when it comes to employment. Young people who do not go to college or enter the military after graduating from high school are given a work assignment by a regional labor department. High-school graduates fill out a document provided by the department and submit it to their schools, which evaluate the document and send it back to the department. The labor department then screens the graduates before assigning work to them.

In the case of college graduates, the college first reviews their applications and conducts personal interviews.

The results are examined by political officials in their regions. Based on their assessment, the graduates are given a certain job. Among discharged soldiers, the labor department or local party officials will assign a job based on the person’s rank.

Article 70 of North Korea’s Constitution stipulates that citizens choose occupations in accordance with their wishes and skills. In reality, however, the party and administrative agencies assign work to citizens in consideration of which caste they belong to and their political inclinations, rather than their abilities or qualifications.

As the party decides on citizens’ occupations, people can’t change jobs freely. In fact, once given a certain job, most North Koreans hold on to it until they retire.

Officially, work hours typically vary between 6 to 8 hours a day depending on working conditions. Labor-intensive industries typically see less hours worked per day, and there are special conditions for working mothers. Women with three or more children are supposed to work no more than six hours, while those who are pregnant or have infants are prohibited from working at night. Overtime work is banned, at least on paper.

According to the North Korean government, workers get 14 days of vacation a year. However this can be as low as 7 or as many as 21 depending on the job. For women, maternity leave is guaranteed—35 days before childbirth and 42 days after a child is born.

In reality, however, workers seldom, if ever, take days off in North Korea because they are frequently mobilized to labor campaigns.

On paper, North Koreans work eight hours a day, six days a week and take 14 days off a year. In truth, however, most men in North Korea work from 7 in the morning till 8 in the evening. Out of 13 working hours a day, two hours are allotted to consuming state propaganda.

After work, North Koreans must evaluate and reflect on their day and attend various meetings that last one or two hours. Women typically start their day even earlier. They get up earlier than their male counterparts and prepare breakfast and lunch before working. Moreover, despite the long hours, wages are low.

Since 2013, many factories and companies in North Korea have been allowed to set wage rates on their own. It is been reported that workers at some highly productive companies earn 20 to 30 times the average income of between 2,000 to 3,000 North Korean won a month in 2018.

North Korean workers are classified into three groups in terms of the monthly cost of living. It is estimated that the bottom group needs 10 to 20 dollars, the middle group, 50 to 100 dollars, and the upper group, 100 to 200 dollars. Given that, it is impossible for North Korean workers to live on the average salary.

North Korea claims that a monthly salary of workers at state-run companies increased from 100 dollars to 150 dollars, after North Korean leader Kim Jong-un introduced an economic reform measure to give companies more autonomy in their management in 2015.

As many can’t afford to pay living expenses with their salary, some North Koreans work at private markets or jangmadang. According to research by Professor Kim Byung-yeon from the Economics Department at Seoul National University, North Koreans who work at the jangmadang earn an average of 172,750 won or about 21 dollars a month. Therefore, North Korean residents can live off of their monthly wages and profits from markets. As official jobs have become little more than a title, more and more people are unable to find jobs.

Theoretically, North Korean workers can choose their jobs in accordance with their desires and merit, and the state says it supports this. But in actual fact, that’s far from true.

After the severe economic contraction in the 1990s, most industrial facilities in North Korea stopped operating and have yet to be restored. Therefore, a large proportion of the working force has been chronically unemployed. The Korea Development Institute in South Korea estimates that the unemployment rate in North Korea stands at between 25 percent and 56 percent. These days, a growing number of young people in North Korea choose not to have jobs because they can’t earn enough wages even if they work, due to economic difficulties. Of course, those people are subject to punishment.

According to a United Nations census of North Korea’s population in 2008, 88 percent of the nation’s population was employed. But the Korea Development Institute’s report in 2016 said that the rate of employment among North Koreans who have official jobs is 56 percent at the most, much lower than the 2008 figure.

In a recent report, Radio Free Asia has also said that a college degree is meaningless for North Korean students. That’s because they can’t receive wages or food from their state-assigned workplaces. North Korean authorities crack down on those who refuse to go to these workplaces, but many people simply head to the jangmadang instead.

In the past, party and government officials were considered the best job in North Korea. But as the perception of money has changed a lot nowadays, money-making jobs are increasingly popular. At present, private investors called donju, traders at markets, operators of karaoke singing rooms, and other service industry jobs – even tech jobs – are highly-coveted.

It is reported that taxi drivers and salespeople are emerging as new, promising occupations these days. It seems more and more North Koreans tend to prefer stable and professional jobs that are unrelated to politics and state affairs.

Since the 1990s, North Korean citizens have been seeking jobs that can make a lot of money. Many have pursued professional jobs or started their own businesses at the jangmadang, while some others prefer to do logistics work, traveling to and from China.

As the jangmadang markets are becoming increasingly influential, another world of jobs is being created, apart from official jobs decided by the party. Indeed, the labor market in North Korea is changing. While the concept of labor based on political ideology is fading away, the winds of a market economy are blowing in to the communist state.