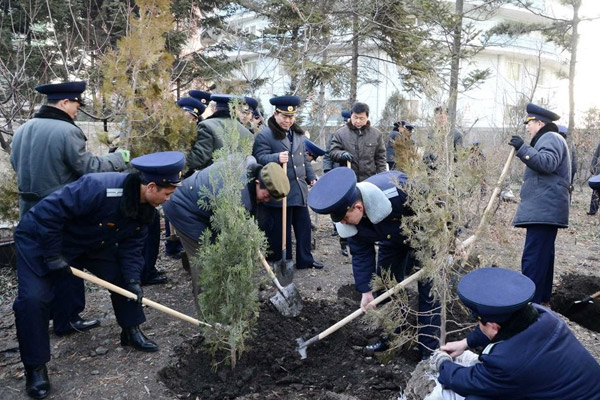 The Korean War in the early 1950s destroyed considerable swaths of forestland on the peninsula. But thanks to decades-long reforestation efforts, South Korean mountains and forests are once again lush, green and full of life.

Ahead of Arbor Day in South Korea on April 5th, we’ll discuss forests in the northern part of the Korean Peninsula. Kang Mi-jin, a North Korean defector who works at the Seoul-based online newspaper, Daily NK, tells us about forestry in North Korea.

North Korea does have its own Arbor Day, which falls on March 2. On this day, children and adults all around the country plant trees. Prior to tree planting, local forestation agencies first decide how many trees should be planted in their regions and how many people should be mobilized to the task. Even former leaders Kim Il-sung and Kim Jong-il planted trees themselves on this important occasion. Thus, it’s only natural that all citizens participate in tree-planting events in North Korea.

Initially, North Korea’s Arbor Day was designated as April 6. But in 1999, the date was moved up to March 2 to commemorate the day when the country’s founder, Kim Il-sung, ascended Pyongyang’s Moran Hill in 1946 to present a forestation vision for the country.

The state media outlet Rodong Sinumn said some 2.8 million trees were planted across North Korea on March 2nd, demonstrating the importance of Arbor Day in the country. Ms. Kang now talks about what kinds of trees were planted that day.

Seedling cultivation centers run by regional forest management offices nourish young trees and distribute them. They select species that are suited to local environments. In the northern alpine region of Ryanggang(량강) Province, for example, conifers and spruces are planted. Korean poplar trees flourish in some areas, and local residents find the poplar trees very useful in their daily lives. But conifers are the most profitable tree in North Korea.

In North Korea, the Ministry of Land and Environment Conservation distributes trees to each region and local residents are in charge of planting them. North Korea mobilizes large tree-planting campaigns regularly, but many of its mountains and forests are barren.

Before the Arduous March period of drought and famine in the mid-1990s, many schools in North Korea were surrounded by dense woods. I remember my village in North Korea was thickly wooded. But rampant illegal logging from the mid-1990s to the early 2000s changed all of this.

After my husband died, I had to cut wood to support my family. I would collect enough wood to be loaded onto three tractors—the amount my family would have to subsist on for a whole year. The wood was not only used at home but also at schools and company events. Of course, the larger the family, the more wood was needed. With more and more households cutting trees in hills and mountains, forests in many parts of the country were quickly ravaged.

During the economic difficulties of the 1990s and early 2000s, North Koreans resorted to local forests for fuel or cleared them entirely to make room for farmland. The forest devastation left North Korea vulnerable to natural disasters like flooding, drought and landslides. For example, the northeastern Hamgyeong Province was hit hard by massive floods during a powerful typhoon in 2016.

To remedy the situation, North Korean leader Kim Jong-un has encouraged reforestation campaigns since he came to power in 2011.

Under Kim Jong-un’s rule, North Korea has prioritized the restoration of forests. Accordingly, trees have been planted in many areas, including on some farmland. Formerly, forestry-related colleges existed only in woodland areas like Ryanggang Province. In fact, I studied at a local forestry college. But North Korea opened a forestry science school at the prestigious Kim Il-sung University in 2017. When graduates from the school are dispatched to local areas, they will hopefully help restore and manage forests effectively.

In his New Year’s speech in 2015, leader Kim Jong-un instructed his officials to cover all mountains in the nation in green within the next ten years. On Arbor Day that year, the North Korean leader planted a tree himself and worked out a detailed reforestation plan.

Under the plan, the nation would double seedling production by 2017, focus on forestation by 2022 and research measures to apply to relatively less-forested areas by 2024. A forestry science school at Kim Il-sung University began offering some 30 different forestry classes less than three months after the school was established.

North Korea is also enlisting international support to help restore its forests. After the inter-Korean summit in April last year, the first inter-Korean cooperation project pursued by the government was the planting of trees on bare mountain sides in North Korea. During another inter-Korean summit last September, the two Koreas also agreed on forestation cooperation, which Ms. Kang believes will help make North Korea’s mountains green and beautiful again.

I understand that South Korea plans to send different kinds of seedlings to the North under an inter-Korean forestry cooperation programs. South Korea probably examined what kinds of trees would be a fit for North Korean soil and climate - such as apple trees. If the program proceeds well, North Korea will be able to restore its forests a lot more quickly and effectively than if they were working alone.

Right after the Korean War, the U.N. concluded that it would be impossible to revive forestland on the peninsula. However, South Korea did so successfully through proactive and consistent forestry policies. Now, the South is ready to share its knowledge with North Korea and help it restore its forests.

To this end, some 1 million seedlings are expected to be cultivated every year at a tree farm in the eastern border town of Goseong in Gangwon Province from this year.

In line with progress towards denuclearization, it is hoped that cross-border cooperation between the two Koreas will make the entire peninsula greener and healthier.