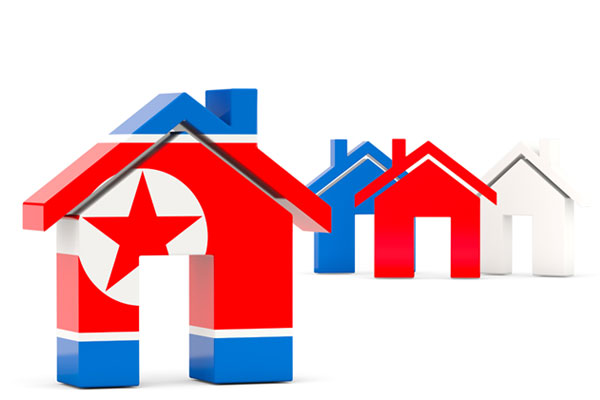 In South Korea, many people remodel their new homes before moving and change interior design each season. Some decorate their homes on their own without consulting specialists. How about people in North Korea?

Today, we’ll learn about home furnishing and interior design in North Korea from Professor Choi Hee Sun from the Graduate School of Arts at Chung-Ang University.

Interior designers in the North mostly work for public buildings including educational institutions, health organizations, and cultural and transportation facilities. They design interiors and exteriors of large buildings, commercial signs as well as furniture and lights installed at entertainment facilities. In South Korea, interior design is more like arranging furniture pieces, lights and finishing materials in a way to suit the taste of customers.

In the North, on the other hand, designers at the Korea Industrial Artists’ Association perform their tasks in accordance with party policies, rather than work for individual customers.

As Professor Choi just explained, interior design in North Korea is one of the tasks to be fulfilled to carry out party projects. Previously, there were reports about customized interiors for individuals in North Korea. It is assumed that the new interiors were intended to meet the needs of the wealthy class.

I imagine that interior design tailored to individual customers appeared in North Korea after the 2000s when the private market or jangmadang flourished. After the completion of Changjon Street in Pyongyang in 2012, in particular, local residents of outdated houses in Central District and the Taedong River area in the capital began to renovate their kitchens and bathrooms, creating a boom in interior decorations. The new affluent class known as donju and foreign currency earners brought in luxurious furniture and materials for home decorations through foreign currency shops. With the capitalistic living culture permeating, interior design business emerged as a new occupation. Media reports say that the business thrived from the early years of current leader Kim Jong-un’s rule.

But now, I don’t think North Korea can afford interior decorations for wealthy people, as the country is struggling to build 10-thousand homes in Pyongyang until the year’s end and it is not easy to bring in imported furniture and quality materials.

It seems to be difficult to manufacture and distribute furniture in North Korea, which has blocked trade with the outside world due to the COVID-19 pandemic. Still, North Korean media has introduced furniture factories spurring production. A propaganda site called DPRK Today has highlighted the Taedong River Furniture Factory as of late, saying that the factory has adopted advanced scientific technology and produced high-quality goods by using discarded wood byproducts.

The factory is known for its quality furniture in the country.

In the North, furniture is a key indicator of improvement in living conditions of the people. North Korean furniture and interiors have been changing with the times.

After the Korean War, North Korea implemented many construction projects in order to secure residential space. Beginning in the 1960s, bathrooms were built inside houses and the country produced relevant materials including tiles. In time for the 13th World Festival of Youth and Students that was held in Pyongyang in 1989, North Korea built large-scale apartment complexes. Around that time, it displayed designs of finishing materials for the interior of the apartments at an industrial art exhibition. In the 1990s when North Korea suffered from extreme economic difficulties, furniture production decreased, due to the lack of materials and energy sources. In the early 2000s, the country began to produce furniture for individual homes, with citizens turning their eyes to new furniture to replace old one. Also, the use of computers in the 21st century led to the appearance of office furniture.

In North Korea, not only designers at architecture institutes, but also industrial artists, take charge of architectural design as well as furniture and lighting design. The country has carried out massive construction projects, especially in Pyongyang, since Kim Jong-un came to power. Accordingly, research on interior design has been conducted actively, while brand new interiors and furniture pieces have appeared.

In the Kim Jong-un era, which could be called an era of science and technology, various furniture pieces and interior design ideas have been exhibited at architectural festivals, with the emphasis placed on convenience and aesthetics. For example, big windows with a modern touch are considered important.

North Korea has unveiled multifunctional furniture, which can transform from one piece of furniture to another, and room dividers that allow users to divide the living area from the kitchen. While renovating old cultural and educational facilities that were built in the 1970s and the ’80s, North Korea has actively developed and produced furniture to be installed at those facilities, including desks and chairs in schools.

Inter-Korean summits and the North Korea-U.S. summit in 2018 brought attention to North Korea. Foreign media began to show interest in North Korean design, in particular. Relevant books have been published and information about North Korean design and interiors has been unveiled online. Some Internet users say that extremely organized buildings and their fairytale-like colors in Pyongyang make the city look like a set for a kid-friendly music video.

Building designs and colors in Pyongyang attracted much attention when British architecture and design critic Oliver Wainwright released a book featuring photos of buildings in Pyongyang. The colors are brighter and more vivid, with finishing materials painted in pastel pink. Green is also used in many buildings to represent eco-friendly architecture. This is one of the distinctive characteristics of North Korean interiors in the Kim Jong-un era. According to North Korean technicians who develop interior colors, the mint color was actually inspired by a traditional multi-colored pattern used in wooden buildings. It shows that North Korea focuses on scientific technology but also makes efforts to reflect the elements of traditional Korean art. Foreigners say that the symmetry in North Korean interior design gives the viewers an intense and powerful impression. The design actually highlights the authority and solidness of North Korean society.

North Korea has set a goal of building 50-thousand homes in Pyongyang alone, with 10-thousand annually starting this year. In line with this large-scale home supply policy, diverse furniture pieces and interior designs are expected to appear in the country.

Downtown Pyongyang is expected to lead the new interior trend. Local architects will likely make great efforts to create built-in furniture as well as standardized furniture that can be produced scientifically for new homes in big cities including Pyongyang. They will focus on diversifying types and colors of furniture. Under the slogan of self-reliance, industrial artists will be committed to simple and functional furniture that can be locally produced in large quantities in a short period of time.

Some of North Korean furniture pieces show the copyrighted designs of foreign brands. There might be some reasons, but this could be a problem when North Korea conducts exchange programs with foreign firms.

Design reflects the times. Interior design, in particular, is directly related to people’s everyday life, so it’s like a microcosm of society. South and North Korea have been divided for over the last 70 years. It would be great for the two sides to understand each other and develop a strong bond of sympathy through bilateral exchanges in the area of interior design.