The Tale of Shim Cheong in N. Korea 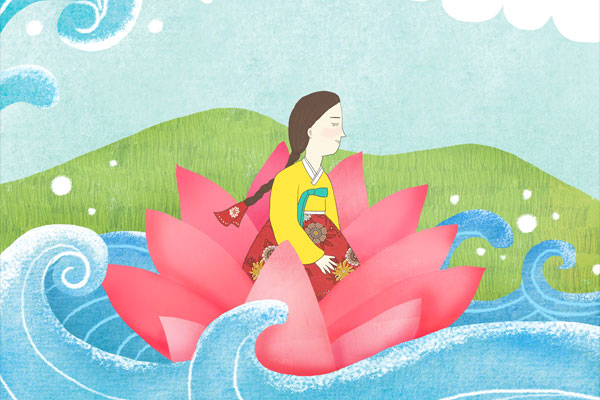 As one of the most representative Korean classical novels, The Tale of Shim Cheong features the theme of filial duty. Set against the background of the Joseon era, when filial piety was considered highly important, the tale was first enjoyed by the public as the traditional genre of musical storytelling known as pansori and later became a novel. Old tales were generally written by hand and this popular novel later came in woodblock editions. During the later years of Joseon, old printed novels were available at cheap prices—as cheap as a bowl of rice soup. Novels published at the time enjoyed great popularity among the public, and The Tale of Shim Cheong was one of them.

In South Korea, there’s probably no one who doesn’t know The Tale of Shim Cheong. The plot goes as follows: A fallen, blind nobleman named Shim Hak-gyu cares for his baby daughter, Shim Cheong, all by himself as his wife dies after giving birth to her. Cheong grows well as a dutiful daughter who is devoted to her blind father. She decides to sacrifice her own life to restore sight to her father and throws herself into the sea. Impressed by her filial piety, the Dragon King in the sea returns her to the human world and she becomes an empress. She holds a feast for all the blind people in the kingdom and reunites with her father. Surprised and overjoyed to hear the voice of his daughter, Mr. Shim dramatically has his sight restored.

Since the division of Korea, this traditional novel has been understood slightly differently in South and North Korea. Today, we’ll learn about how The Tale of Shim Cheong has been interpreted in North Korea from Dr. Yee Jisun at the Korea Institute for National Unification.

Right after Korea’s liberation from Japanese colonial rule, North Korea established a number of art troupes with the purpose of creating a new national culture. At the time, the national theatrical troupe staged various plays, including The Tale of Shim Cheong. After the Korean War, North Korea reinterpreted traditions and classical literature to fit the socialist regime. In the process, many classical novels, including The Tale of Shim Cheong, were adapted into changgeuk(창극), a Korean traditional opera. Later, the 1988 edition of The Tale of Shim Cheong was completely recreated as a Pibada-style theatrical performance. Pibada is the title of a North Korean opera. The Pibada-style opera combines traditional elements with socialism and alters the characters’ behavior and thoughts in a way to uphold the spirit of socialism.

In the tale, Shim Cheong’s mother dies after giving birth to the baby. Her husband, Mr. Shim, has to take care of his baby girl all alone. Worse yet, he is a blind man. Viewers can’t watch the tragic scenes of his despair and struggle without tears. But in the North Korean version, this part is interpreted differently.

After his wife dies, the blind man begs for breast milk in the neighborhood to feed his baby. This is a very sad, gloomy scene in the original pansori performance. But in the North Korean version of the tale, people in the village feel pity for the poor father and daughter and join forces to help them out. The communal childcare shows that the people overcome a crisis through collective power. So, the characters’ hardships are not portrayed tragically but are used as a means of highlighting collectivism. The friendly neighbors gladly raise a child in cooperation and the baby grows into a dutiful and optimistic girl to serves her blind father loyally and cheerfully. This is different from the original tale.

North Korea often applies of the concept of “class” to traditional stories. A similar example is seen in The Tale of Shim Cheong. The blind Shim falls into a ditch while crossing the bridge. A Buddhist monk, who is passing by, saves him and tells him that he would regain his eyesight if he offers 300 bags of rice to Buddha and prays sincerely. Shim Cheong learns the fact, and she decides to become a sacrifice for sailors in return for 300 bags of rice. In the neighborhood, a noble lady called Jang, who loves Shim Cheong like her own daughter, proposes giving 300 bags of rice herself and persuades the girl to cancel the contract with the sailors. But Shim Cheong declines the offer and is thrown into the sea. The North Korean version of the tale perceives this part in light of class difference.

The North Korean version criticizes Lady Jang, who belongs to the upper class, for feeling sympathy for Shim Cheong, who represents the public. That is, North Korea claims that this part was exaggerated or glamorized and that it’s simply not true in reality.

In the North Korean version, the act of Shim Cheong turning down Lady Jang’s offer is interpreted as her sincerity to keep faith with the seamen.

Clearly, the part underlines the general public’s conscience and faith.

In South Korea, The Tale of Shim Cheong is about devotion to one’s parents. The North Korean edition also deals with it from the perspective of morality and conscience.

Lady Jang’s kindheartedness is dismissed as a simple embellishment of the upper class. In a similar context, Mr. Shim is not described as a nobleman but as one of the common people. This is also different from the original tale.

In North Korea, conflict between the ruling class and the subjugated class is very important. So, the success story of a good nobleman doesn’t make sense in the North. That’s why Mr. Shim and his daughter Shim Cheong are denied their nobility status. In the North Korean interpretation, their misery stems from the limitations of the feudal times. Shim Cheong should be hailed as an icon of filial duty and a traditional character that the people must emulate. For that purpose, she should represent the general public, not the upper class. Denying the virtue of Lady Jang could be understood in the same context.

Shim Cheong’s good moral character and her spirit of self sacrifice shine only when she belongs to the general public. The happy ending of the story stresses the victory of the good people. Through the tale, North Korea tells the people that something good and beautiful wins eventually and the victory is led by Shim Cheong, one of the common people.

In both South and North Korea, classical novels are slightly altered so children can read them easily. But in the North, socialist elements are also included. In one of the South Korean versions, Shim Cheong is portrayed as a beautiful girl. In the North, physical appearance is not important. What matters is how diligent the character is as a hardworking laborer. In the North Korean version, Shim Cheong is a good-hearted laborer who works diligently.

She is also depicted as a moral and conscientious person as an exemplary model that people should follow. The plot remains unchanged overall, but the North Korean version of the tale is reinterpreted in a way to reflect socialist elements in a traditional frame.

Literature reflects thoughts and norms of a particular era. We can see The Tale of Shim Cheong has been adapted or embellished in line with the policies and intentions of the ruling party in North Korea.

(Next time, we’ll learn about tales about foxes in North Korean literature.)