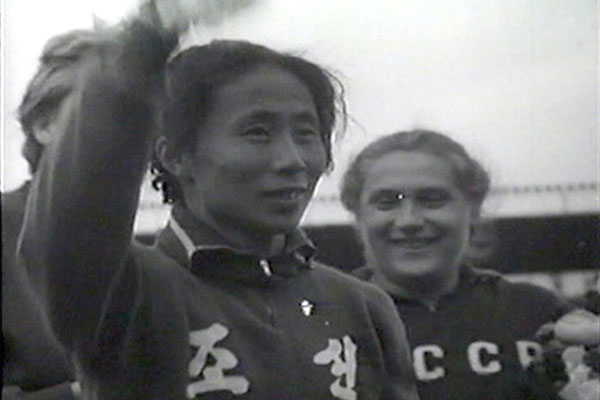 In capitalist countries like South Korea, famous sports stars earn a lot of money. Their status has much to do with how much they get paid. In socialist states like North Korea, on the other hand, honor is more important than money. For athletes in North Korea, it is more important to devote themselves to the state and contribute to promoting their home country internationally. So in the North, those who won gold medals at international competitions such as  the Olympics are more famous than professional players who play abroad and get high annual salaries.

A number of North Korean athletes stood out at international sports events to become famous abroad. For example, Shin Keum-dan was a well-known track and field athlete who competed in the 1960s. In the early 1960s, she won the 400-meter and 800-meter events at a track and field competition in Moscow, setting world records. At the Games of the New Emerging Forces in 1963, she won the 200-meter, 400-meter and 800-meter races with world records, which were not officially recognized. In North Korea, she was called the “queen of track and field” and the “pride of Korean people.”

Another North Korean sports star is female judoka Kye Sun-hui, who is well known in South Korea as well. She surprised the world at the 1996 Atlanta Olympics by beating then-heavy favorite Ryoko Tamura of Japan in the gold medal match. The 16-year-old Kye became the youngest gold medalist in judo in Olympic history and the first North Korean judo player who grabbed an Olympic gold. Afterwards, she won medals at international competitions several times. She made a surprise appearance at the 2002 Busan Asian Games in South Korea to light the games’ torch with South Korean judoka Ha Hyung-joo.

Jong Song-ok(정성옥) came in first in the women’s marathon at the 1999 World Championships in Seville, Spain. During an interview, she said she was able to put forth every ounce of her energy because the image of her dear leader came to her mind. Since the interview, North Korean athletes who won medals have all said during interviews that they could capture the medals thanks to their top leader. Jong later served as a delegate of the Supreme People’s Assembly. In North Korea, she is introduced as a great person who overcame difficulties to achieve her goals.

In North Korea, sports stars play a role in improving the nation’s status internationally, while propagating political ideology domestically. They are given special treatment, in accordance with their performance at international competitions. The best players are awarded the title of “People’s Athlete” or “Meritorious Athlete.”

When referring to great athletes, North Korea uses phrases like “Sports Master,” “Sports Innovator” or “Meritorious Athlete” rather than “stars.” The title of “Sports Master” is given to those who performed well at domestic competitions, like breaking new records. “Sports Masters” can be assigned jobs they want. “People’s Athletes” or “Meritorious Athletes” are those who set the nation’s new records two or more times a year or achieved excellent results at international events. They are provided with an opportunity to live in Pyongyang and are eligible for pension benefits. They are also given apartments.

North Korean sports stars have been given more special treatment under current leader Kim Jong-un’s rule. The top leader has treated athletes differently from his predecessors. On top of official rewards for outstanding athletes, the leader himself has encouraged them in a very friendly way.

In the current Kim Jong-un era, the leader has celebrated the achievement of athletes who won international competitions in various ways, including parades. Moreover, he hugged them, linked arms with them and took photos with them as a sign of intimacy. So compared to the past, the way the top leader treats sports stars has changed.

Kim Jong-un has carried out various sports-related policies since the early years of his rule, under the slogan of “building a sports powerhouse.” Accordingly, North Korea created an agency called the State Physical Culture and Sports Guidance Commission and began to improve the nation’s poor sports facilities and environment based on systematic policies. The North also introduced scientific nutrition management and sports systems in order to nurture promising players.

Under Kim Jong-un’s rule, sports stars have been given even better treatment, including generous financial benefits, so other athletes are motivated to win medals at international sporting events. To improve their athletic abilities and enable them to achieve substantial results on the international stage, North Korea has introduced world-class coaches and training methods. As part of those efforts, the country set up the Pyongyang International Football School in the capital in 2013 and invited coaches from Spain, Germany and Norway. Jorn Anderson from Norway served as the manager of the men’s national football team in North Korea from May 2016 to March 2018.

North Korea has put a great deal of effort into fostering football players, in particular. The Pyongyang International Football School, for example, has selected students aged between seven and 17 from across the country and carried out various projects to train them as best players. North Korea has also helped rising football stars get training abroad to encourage them to perform on the global stage.

There are three famous North Korean professional footballers who have played abroad—Han Kwang-song(한광성), Choe Song-hyok(최성혁) and Pak Kwang-ryong (박광룡). Han is a striker for the North Korean national team. Known as the “Ronaldo of North Korea,” Han played for Italy’s Juventus and Qatari side Al-Duhail. Choe joined the Italian league earlier than Han, while Pak played as a forward for FC Basel in Switzerland and Austria’s SKN St. Pölten.

These players are well known internationally, even in South Korea, but they are not in their home country. One of the reasons is that the socialist North does not recognize professional football players. North Korean people do not know whether they are really famous overseas and how much money they earn. But they attract special attention outside North Korea because they perform well and earn foreign currency for the regime. Some say that they have returned to North Korea due to U.N. Security Council sanctions, but the story has not been confirmed.