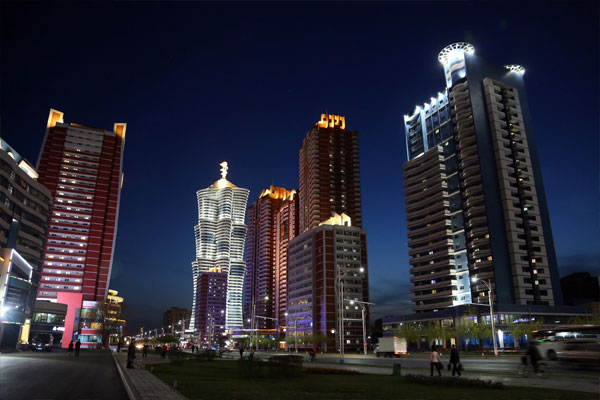 The Yanggakdo Hotel in Pyongyang, in particular, is 48 stories high, and the entire building is covered by glass panels to add a modern and sophisticated feel. As one of North Korea’s best hotels, it has 1,001 guest rooms plus various facilities including a swimming pool, a bowling alley, a billiards room and translation devices for foreigners.

In modern society, hotels are more than just places to stay the night. In this pandemic era, in particular, many people spend their holidays at hotels. Hotel packages are pretty popular, as guests can enjoy a wonderful view and delicious meals and can use various amenities like a swimming pool, a spa and even a theme park.

Speaking of lodging facilities in North Korea, there are hotels, inns and private houses providing bed and meals. Located in big cities and tourist sites, hotels are mostly for foreigners, not for local citizens. Ordinary citizens in the North think they have nothing to do with hotels. Inns are found in cities and counties, and they are used by people on business trips.

Locals can use some mid-and small-sized hotels, including the Pothonggang(보통강) Hotel in Pyongyang. When people from across the country attend national events in the capital, they stay at hotels that are not used by foreigners. The state pays the expenses for lodging and meals. North Korean citizens can also use the Masikryong(마식령) Hotel at the Masikryong ski resort as long as they pay the price. Still, a lot more hotels are only for foreigners, and general citizens are not allowed to use such hotels.

If North Korean people move to different places and use state-run lodging facilities, they need a travel certificate or business trip certificate. When people travel for personal purposes without the certificate, they use bed and breakfast accommodations in private homes.

Not many North Koreans go on trips, as they are not allowed to move freely. So, inns in local regions were enough to accommodate travelers on official business. But since the mid-1990s, when the country suffered from extreme economic difficulties, many North Korean people have moved around the country for market activities without certificates. As a result, existing inns could not handle the increasing number of travelers. The travelers began to use private lodging facilities, which are, in fact, better than inns.

Korea’s first Western-style hotel was Daebul Hotel that opened in Incheon in 1888. Another Western-style hotel, the Sontag Hotel, was built in Jeongdong, Seoul, in 1902. After the Korean War in the 1950s, the hotel business began to develop in South Korea, with the creation of various hotels, including the Geumsujang Hotel, the Savoy Hotel and the Walkerhill Hotel.

North Korea’s first hotel was the Taedonggang Hotel that opened in 1956. But the word “yeogwan,” meaning “inn,” was used instead of “hotel,” as North Korea avoided foreign words at the time. The country began to use the word “hotel” in the 1970s and started constructing hotels in earnest in the 1980s.

North Korea hosted the World Festival of Youth and Students in Pyongyang in 1989 as a political counterpoint to the 1988 Seoul Olympics. The international event in Pyongyang was attended by 22-thousand people from 177 countries. Hotels in Pyongyang were far from enough to accommodate the visitors. Therefore, North Korea began to build hotels in 1987. Most of them were completed before 1989, except the Ryugyong Hotel, which remains incomplete today. But they were still insufficient. North Korea built Gwangbok(광복) Street in Pyongyang and let foreign visitors stay at apartments on the new street.

The Ryugyong Hotel, located in the Pothonggang district, is by far the most prominent feature of Pyongyang’s skyline.

North Korea started constructing the hotel in 1987. Standing at as high as 330 meters, the hotel was scheduled for completion in 1992. But it still remains unfinished due to the repeated suspension and resumption of construction. The building is listed by Guinness World Records as being the tallest unoccupied building in the world.

The 105-story skyscraper required massive capital and technology. Construction of the hotel started as a French joint venture. But the French construction company withdrew from the project in the 1990s as North Korea failed to pay the construction cost on time. In the 1990s, the socialist bloc collapsed and the North was hit hard by economic hardships. Construction of the hotel was suspended until 2008, when Egyptian company Orascom decided to invest 250 million dollars in the hotel construction on the condition that it would manage 80 stories of the building. Accordingly, construction resumed and the exterior work was complete in 2011. But the interior of the hotel still remains undone. The building was initially intended to house 3,000 guest rooms and five revolving restaurants. Afterwards, luxury hotel management group Kempinski announced that it would run the Ryugyong Hotel, but the plan fell through eventually. Now, an LED display installed on one side of the building is used to show propaganda imagery on special occasions such as Kim Il-sung’s birthday or national holidays.

North Korea now recognizes tourism as a promising industry and invests heavily in it. The country has focused on fostering tourism experts for the purpose of attracting foreign tourists. In May last year, it unveiled the education scene of the Pyongyang University of Commerce and Service, which trains tourism-related personnel, including hoteliers. It shows that the country makes great efforts to nurture hotel management specialists.

It is said that North Korea finds it difficult to build new hotels or renovate old ones due to its border closure to fend off COVID-19 and international sanctions. But North Korea seems to be looking for an exit from economic isolation in the tourism industry, since tourism is not subject to the sanctions.