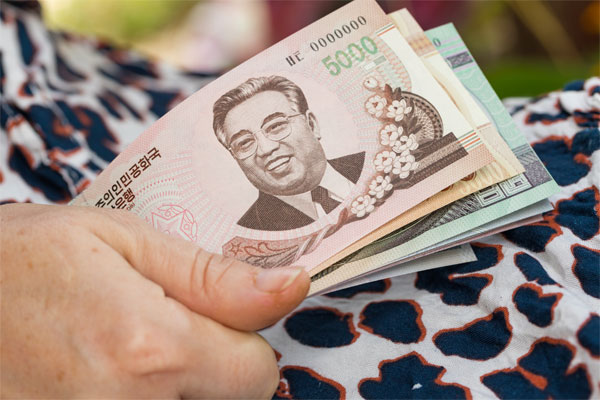 Some say that you should look at the banknotes of a country if you want to better understand that country. Banknotes here refer to banknote designs, to be more specific. They contain various elements that symbolize the country’s history, spirit, culture and art. So, what do North Korean banknotes symbolize? Today, we’ll learn about the characteristics of North Korean banknote designs from Dr. Lee Ji-soon at the Korea Institute for National Unification.

Banknotes in South Korea and in many Western countries usually feature historical, political or cultural figures. North Korean bills, on the other hand, reflect important ideas or issues of the very period when they were printed.

They typically show the image of laborers, farmers or intellectuals who do not actually exist. North Korea’s founder Kim Il-sung is the only real person who appears on the country’s bills.

North Korea has carried out currency reform five times so far. At the time of the first reform in 1947, 1-won, 5-won, 10-won and 100-won notes all featured the same image of two people—a farmer and a laborer. People distinguished the bills by the difference in their face values and colors.

The banknotes show a farmer wearing a wide-brimmed straw hat and holding a pitchfork, and a laborer holding a hammer. The two muscular men have protruding cheekbones, and their piercing eyes shine brightly as if to express their strong will. The banknotes show that landlords had economic power until the Japanese colonial period but farmers and workers emerge as the mainstream under the new socialist regime. This message is also seen in the phrase “Democratic Korea” printed on the back of the bills.

Women began to appear in North Korean bills from the second currency reform in 1959. At first, they were portrayed as farmers harvesting crops. As time went by, however, the image of women in the banknotes has also changed, in line with different social goals.

In 1959, the 10-won bill showed a woman harvesting apples, and the 50-won note depicted a woman reaping rice. The women look cheerful, smiling brightly at the abundant harvest. The images show that women are associated with the traditional, subconscious wish for a bumper crop. They also indicate the state’s scheme to use women’s labor, and the young women brimming with life symbolize the ideal image of women pursued by North Korean society at the time.

When the third currency reform was enacted in 1979, the 5-won bill featured a serious-looking woman holding a sheaf of rice in her arms. The image of the woman taking a step forward, with her skirt flapping in the wind, stresses the need to be more active and dynamic. It shows a more sober image, compared to the previous cheerful one.

The socialist constitution of North Korea, which was adopted in December 1972, defined juche or self-reliance ideology as the country’s official governing philosophy. According to then-leader Kim Il-sung, the juche idea means that the masses of the people are the masters of the revolution and construction.

This spirit of the times is well reflected in the third currency reform in 1979, when the banknotes showed people from various groups. For example, a kindergartner holding a bouquet of flowers, a boy student blowing a horn, a girl student clad in a gym suit and a college student with a book against the backdrop of the Children’s Palace in Pyongyang and Kim Il-sung University appear on the front of the 1-won banknote, which is the most widely used bill in daily life. The image indicates the happiness of the new generation and bright prospects for the future.

From the 1979 edition of banknotes, the image of former leader Kim Il-sung appeared on the front of the 100-won note, the largest denomination bill at the time.

Workers and farmers seldom see large bills. Even if they may get one somehow, they don’t put it into their pockets or crumple it. Instead, they hold on to the precious note. I think that’s why the portrait of Kim Il-sung is printed on the highest bill.

The 1979 edition of the 100-won bill showed the former leader who puts on a solemn look, wearing a traditional Mao suit. But in the 1992 edition of bills, the leader clad in a Western suit and a necktie slightly turns his body to look more natural, against the backdrop of North Korea’s national flower of magnolia and a type of orchid flower named after him.

A pattern inspired by sunshine is seen in the bill, probably because his image is often associated with the sun. After the fifth currency reform in 2009, the smiling image of Kim Il-sung appeared on the 5,000-won bill. Then-leader Kim Jong-il instructed the distribution of the bills featuring the friendly image of Kim Il-sung to show that the deceased leader is always with the people even after his death.

The back of the bill shows the International Friendship Exhibition, which is a museum displaying various gifts former leaders Kim Il-sung and Kim Jong-il received from foreign envoys. Current leader Kim Jong-un highly valued three important keywords—globalization, modernization and scientification. Speaking of globalization, North Korea hopes to stand on the global stage during or after the Kim Jong-un regime. Also, North Korea probably wanted to demonstrate to its people that the international community has recognized the legitimacy of the Kim Jong-un regime. The new banknote design contains this meaning.

Following the 1992 currency reform, a banknote showed the image of Rutherford’s atomic model, in which electrons orbit around the nucleus, like planets revolving around the sun. On the front of the 5-won bill, the model of the atom is seen on the left of a group of students. In the 2009 edition of the 5-won bill, a scientist with a medal around his neck and a student wearing the school hat of Kim Il-sung University look at the same atomic model.

The model of the atom shows North Korea’s emphasis on nuclear weapons development, science and technology as well as its strong desire to build a powerful country. The previous Kim Jong-il regime dreamed of becoming a military power through nuclear development, as seen in the 2009 edition of banknotes, and the current regime inherited its predecessor’s dream.

North Korean banknotes, in the early stage, featured farmers and workers. Around 1979, they showed students. And a scientist and a student appear in the 2009 bill, which reflects the country’s crucial goal of developing its economy and nuclear programs through science and technology.

North Korean banknotes only use images, not real persons, except in the case of Kim Il-sung. It seems the regime even uses banknote designs as a propaganda tool.

Next time, we’ll learn about symbols found in the North Korean banknote designs.