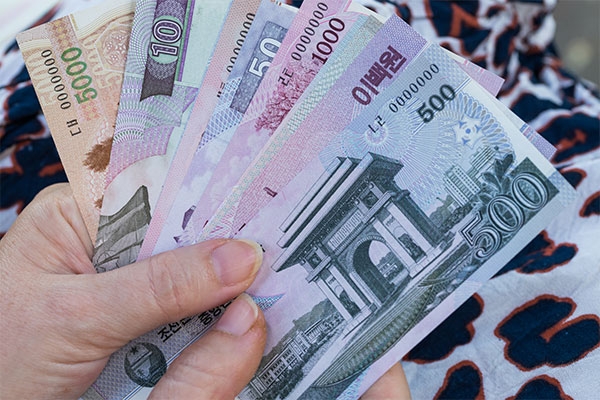 From 1959, North Korean banknotes included the state emblem. Created in 1948, the oval-shaped emblem features a ribbon at the bottom, where the official name of North Korea, “Democratic People’s Republic of Korea,” is written. A five-pointed red star is seen at the top, meaning socialist revolution. Mt. Baekdu, a hydroelectric dam and a steel tower are found below the red star, and these symbols are encircled by rice. Mt. Baekdu is considered the sacred mountain in Korea, while rice represents agriculture and farmers. The hydroelectric dam and the steel tower mean industries and workers.

The image of North Korea’s national flower, the magnolia, is printed as the watermark for the banknotes to protect against counterfeiting. Flowers appeared on coins in the 2009 currency reform. The 10-chon coin shows an azalea, which symbolizes Kim Jong-suk, North Korean founder Kim Il-sung’s first wife and former leader Kim Jong-il’s mother. Two other famous flowers named after Kim Il-sung and Kim Jong-il adorn the 1-won coin and the 50-chon coin, respectively.

After North Korea’s first currency reform in 1947, all banknotes featured the image of two people—a farmer and a laborer—on the front, and the peaks of Mt. Baekdu on the back. The mountain has been used as the symbol of Kim Il-sung since North Korean poet Cho Ki-chon announced his epic poem entitled “Mt. Baekdu” in April 1947 to praise Kim’s guerilla activities.

Mt. Baekdu is regarded by Koreans as a holy mountain and their spiritual home. North Korea has used the mountain for political purposes. After Korea’s liberation from Japanese colonial rule, Kim Il-sung took power in the northern half of the Korean Peninsula. In the process, he used the symbolic meaning of the mountain to legitimize his regime and his rule.

In the North Korean bills, the snow-covered peaks of Mt. Baekdu appear farther away, while dense forests appear closer. As Dr. Yee just explained, North Korea included the image of the sacred mountain in its banknotes as a symbol of legitimacy of the Kim family.

The image of Mt. Baekdu covered with snow and Lake Samji is featured on the back of the 1979 edition of the 50-won note. Samji means “three ponds” in Korean and it symbolizes Kim Il-sung, Kim Jong-suk and Kim Jong-il. North Korea claims that Kim Jong-il was born in a secret camp at the mountain, where his mother, Kim Jong-suk, fought against Japan as an independence activist. It looks like the banknote simply shows a landscape, but the design actually implies the country’s power transfer scheme.

Lake Samji is portrayed more vividly on the 2009 edition of the 1,000-won bill. Kim Jong-suk’s birthplace in Hoeryong appears on the front, and two birch trees on the shore of Lake Samji are seen on the back. A sign that indicates Kim Il-sung visited the site is also included in the design.

The bill shows that North Korea used the spiritually important mountain for Koreans as its own political symbol and its leadership transition plan.

Many countries include the image of important buildings or structures in their banknotes to display their historical, religious or cultural pride. The examples include the politically significant White House and Capitol Building in the U.S., the Basilica of Santa Croce in Italy, the Great Wall of China and the Rila Monastery in Bulgaria.

North Korea, too, introduced its structures in banknotes. For instance, Kim Il-sung University appears on the front of the 1959 edition of the 5-won bill. Established in 1946, the school is the first and the most prestigious university in the country. The country’s largest central library named the Grand People’s Study House, which is another source of pride, is shown on the back of the 1992 edition of the 5-won note. North Korea takes great pride in its capital of Pyongyang as well. From 1959, various images representing the capital appear on the bills.

The 1959 edition of the 10-won bill features the Taedong Gate on the front and the Liberation Tower on the back. The Taedong Gate and the Taedong Bridge were destroyed during the Korean War, but North Korea reconstructed them after the war. Through the banknote design, North Korea shows its confidence that the capital healed the scars of war and began to take a new leap forward. The back of the 500-won in 1998 shows the Chongryu Bridge, the country’s first cable-stayed bridge that was constructed in 1995 to commemorate the 50th anniversary of the party foundation. Before the bridge was built, people would walk across the Taedong Bridge. But the new bridge enabled people and vehicles to transport far more goods across the Taedong River. The banknote design symbolizes that Kim Il-sung’s vision of building a great capital city has been realized.

North Korea highly praises its steel industry in its culture and art as a solid basis of the socialist industries.

Tall chimneys, a running freight train and factory buildings related to steelmaking are featured on the front of the 1959 edition of the 100-won bill. Afterwards, dynamic images representing the prosperity of the socialist state appeared on North Korean banknotes.

The Kangson Steelworks symbolizes the industrial development of North Korea. The steel plant appears in the 1979 bill, reflecting the country’s development strategy that focused on the steel industry. The North highly values hydroelectric power stations as well. The 10-won note issued in 1992 features the image of the West Sea Barrage, the largest sea lock gate in the country. Amid international sanctions, North Korea has built a lot of small hydroelectric power plants in an effort to generate energy on its own. The image of a power station that was completed in 2008 appears on the 5-won bill in 2009 to show that North Korea is committed to generating power independently and fully operating industrial facilities. The country claims that this is the victory of the socialist system and ideal economic development. The banknotes contain such an important symbol of regime maintenance.