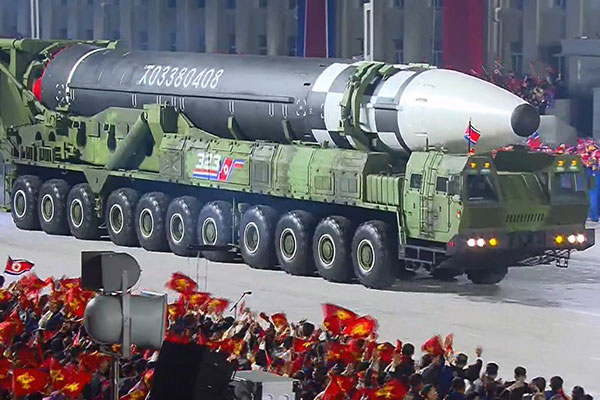 According to the North's official Korean Central News Agency on Friday, Kim issued the order during his visit to the Sohae Satellite Launching Ground.

The satellite launch site can be used to launch long-range rockets including the ICBMs.

Kim reportedly inspected the site and ordered modernizing and expanding it to ensure that "various rockets could be launched to carry multi-purpose satellites, including a military reconnaissance satellite."

Kim reportedly ordered the reconstruction of the launching ground zone and the facilities for the general assembly of rockets to "enable the launch of large carrier rockets."

Meanwhile, South Korea and the United States announced on Friday that North Korea's two recent ballistic missile launches were part of tests for a new intercontinental ballistic missile(ICBM) system under the pretext of its space program.

Seoul's Defense Ministry said that South Korea and the U.S. reached the conclusion after a close analysis of the North's two ballistic missile tests on February 27 and March 5.

In a text message to reporters, the ministry said the two launches involved a new ICBM system that the North is developing, which was first unveiled during the Korean Workers Party parade on October 10, 2020.

The ministry said the latest two tests did not demonstrate the range of an ICBM, but the North seemed to have conducted the launches to test elements of the new system ahead of a full-fledged launch at full range, potentially disguised as a space launch.