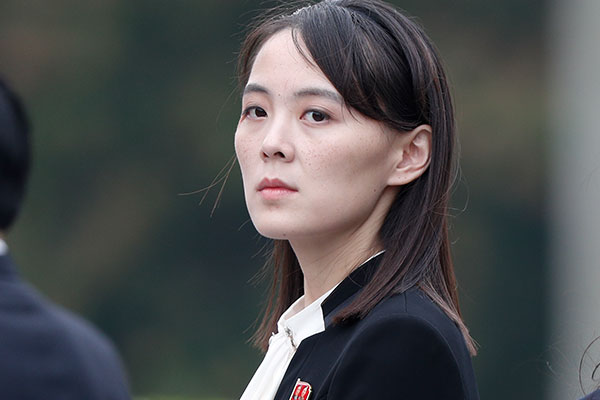 The powerful sister of North Korean leader Kim Jong-un has repeated criticism of South Korea's defense chief for talk of "preemptive strike" capabilities, but said her country does not view the South as its principal enemy.

In a statement carried by the North's official Korean Central News Agency, Kim Yo-jong said that North Korea would not fire a single bullet or shell at South Korea, adding the North does not view the South as the target of an attack by the North.

In her second statement this week, Kim, however, criticized South Korean Defense Minister Suh Wook's remarks again, saying that it was a very dangerous idea for the South Korean military to call North Korea an enemy and discuss the possibility of preemptive strikes against the North.

Suh said on Friday that the South Korean military has capabilities to accurately and quickly strike the origin of a fired North Korean missile as well as command and support facilities in case there are clear signs of a missile launch.

In the Tuesday statement, Kim reportedly warned that if South Korea chooses military confrontation with North Korea, the North's nuclear forces will have to carry out their duty.

Kim and a top North Korean official issued statements on Sunday condemning Suh's remarks, and warned that the North will destroy major targets in Seoul and the South Korean army if the South engages in a dangerous military action such as a preemptive strike.

U.S. Special Representative for North Korea Sung Kim said on Wednesday that Pyongyang could be planning another missile launch or a nuclear test for its April 15 holiday.

The top nuclear envoy made the remarks to reporters when asked about concerns that the North may take provocative action on the occasion of the 110th anniversary of the birth of its founding leader Kim Il-sung.

In a briefing over the phone, Kim said that he didn't want to speculate too much, but it could be another missile launch or a nuclear test.

Kim added that the important thing is that the U.S., in cooperation and coordination with its allies and partners, is prepared to deal with whatever North Korea may undertake.

He emphasized that the U.S. hopes that the North will refrain from further provocation, reaffirming that the U.S. remains open to diplomacy and dialogue with the North.

Officials in Seoul said they are keeping an eye out for developments in North Korea following the U.S. warning.

An official from the unification ministry said on Thursday that intelligence communities in the South and the U.S. are closely watching for signs of test preparations, and that the allies are in close coordination to maintain a firm defense readiness posture.

The official declined to speculate on the possibility of Pyongyang conducting a nuclear test around the birthday anniversary on April 15.

Authorities suspect that the North has begun restoring the number three shaft at its Punggye-ri nuclear testing facility in North Hamgyong Province.