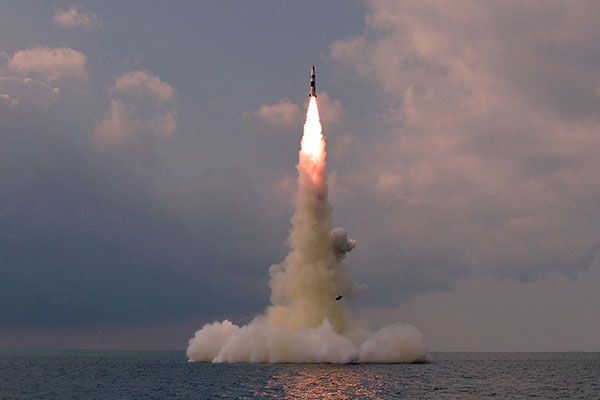 On Saturday afternoon North Korea staged another provocation by firing an unidentified projectile into the East Sea. Details of the launch including the range and altitude are being analyzed.

This comes just three days after  North Korea fired a ballistic missile from the Sunan area in Pyongyang towards the East Sea.

South Korea's Joint Chiefs of Staff(JCS)said that Wednesday's missile flew 470 kilometers with a maximum altitude of 780 kilometers and top speed of Mach Eleven.

The presidential office has strongly condemned North Korea’s ballistic missile launch, which it calls a clear violation of U.N. Security Council resolutions and an act of running counter to international calls for peace and stability.

It said South Korea will continue to take necessary measures through close cooperation with involved countries including the U.S. and the international community.

Meanwhile, North Korea has broken the custom of reporting on its missile launches  via its state-run media the day after conducting them.

Key media outlets controlled by the government, including the Rodong Sinmun and the Korean Central News Agency, have yet to report on the North’s test-firing of a ballistic missile.

The North has typically featured coverage of its missile launches the day after conducting them via state-run media along with photos.

Observers say it is particularly unprecedented for Pyongyang to stay silent on Wednesday’s launch as the missile that was test fired is presumed to be an intercontinental ballistic missile(ICBM).

Including Saturday's launch, the regime's has engaged in 15 shows of force this year alone.