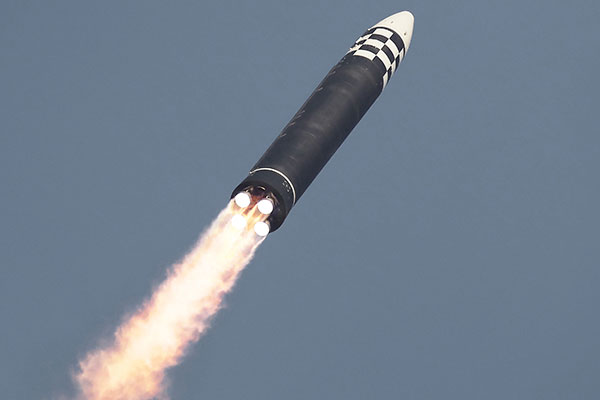 The first missile is a suspected ICBM, estimated to have traveled around 360 kilometers at an altitude of 540 kilometers. Military authorities reportedly believe it may have been a Hwasong-17, which had failed a test launch in March.

The second and the third missiles are suspected to be KN-23 short-range missiles, with similar characteristics to the Russian Iskander.

This marks the second time Pyongyang conducted missile tests since the Yoon Suk Yeol administration took office earlier this month, and comes just four days after the South Korea-U.S. summit held in Seoul over the weekend.

The allies' military authorities, in response, fired a Hyunmoo-2 ballistic missile and an Army Tactical Missile System, or ATACMS, missile into the East Sea to display their joint "rapid strike capabilities." The last time the allies carried out a joint response was in July 2017.

Yoon ordered the military to maintain its readiness posture to ensure that there is no vacuum in national security.

The extended deterrence would involve a U.S. deployment of its full range of military assets to defend ally South Korea in the event of a contingency.

Yoon called for a thorough implementation of sanctions on the North, including those imposed by UN Security Council resolutions, through close coordination with the U.S. and the international community.

He also urged officials to make sure that the latest provocations by the North do not adversely affect the South Korean economy and the people’s daily lives.

On Thursday, the United Nations Security Council(UNSC) failed to adopt a resolution aimed at imposing additional sanctions on North Korea over its ballistic missile launches as China and Russia vetoed it together.

The Security Council put the resolution to a vote in a session at the UN headquarters in New York.

The resolution received the support of 13 members of the 15-member Security Council, with just China and Russia – both permanent members – together vetoing fresh sanctions against the North.

A UNSC resolution must secure the support of nine or more members and cannot pass if it is vetoed by any of the five permanent members – Russia, China, the U.S., France and Britain.

The resolution would have reduced the amount of crude oil that North Korea can legally import each year from four million to three million barrels.