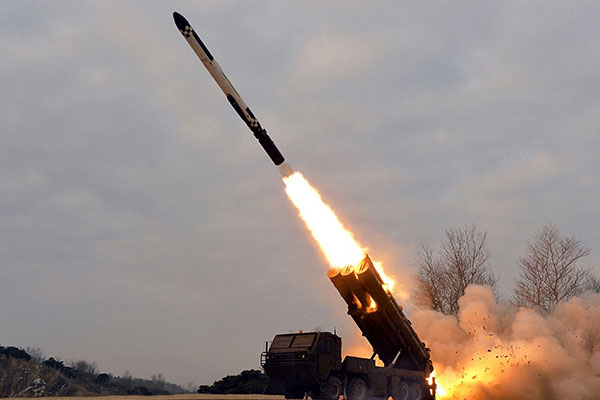 According to a military official, Seoul detected the missile launches from the North's South Pyongan Province in the early hours of Wednesday.

Military authorities from South Korea and the U.S. are reportedly analyzing their flight distance and other details.

The missile launches come just over two months after Pyongyang fired a ballistic missile on June 5, and constitute the fourth round of launches since the Yoon administration took office in May.

While the United Nations Security Council does not ban the North from testing cruise missiles, the latest firing comes two days after Yoon offered a "bold initiative" to improve the North Korean economy and its people’s livelihoods in return for its denuclearization.

North Korea responded to the South Korean military announcement on Friday, saying its latest two cruise missiles were launched from Anju, South Pyongan Province, not from Onchon as announced by South Korea.

North Korean leader Kim Jong-un’s sister Kim Yo-jong, who oversees Pyongyang’s policies in relation to South Korea, said in a statement that the test-launch was conducted on Kumsong Bridge in Anju, contrary to what she labeled as an unskilled and haste announcement by the South Korean authorities.

Kim pointed out the error while criticizing President Yoon Suk Yeol’s vision for a “bold initiative” toward the North and ridiculing Seoul’s capacity to gather intelligence on Pyongyang.

Kim mocked the South, asking how come those repeating such phrases as tracking and surveillance based on close coordination with the U.S. cannot detect the exact launch time, venue or the specifications of the weapons from the North.

Following Kim's statement, South Korea's Joint Chiefs of Staff said there is no change in its analysis of the cruise missiles.