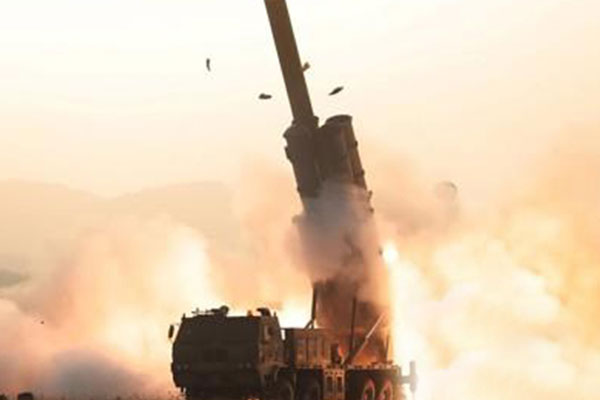 The JCS said that the projectiles, fired at 4:35 p.m. 4:38 p.m. respectively from the city of Sunchon, South Pyongan Province, flew around 370 kilometers across the Korean Peninsula at a maximum altitude of around 90 kilometers before falling into the East Sea

The projectiles were reportedly detected by an Aegis-equipped South Korean destroyer and a land-based missile radar.

State media reports said that the tests verified that the "continuous fire system" of the launchers is able to "totally destroy" a group target of the enemy by a surprise strike and verified the "perfection" of the weapons system.

The reports added North Korean leader Kim Jong-un "expressed satisfaction" over the test. Kim was likely not personally present at the launches.

The provocations came just a day after North Korean leader Kim Jong-un sent a condolence letter to President Moon Jae-in following the death of his mother earlier in the week.

The JCS said that the military is monitoring the situation in case of additional launches and maintaining a readiness posture, calling on the North to immediately cease such provocations as they do not help efforts to ease tensions on the Korean Peninsula.