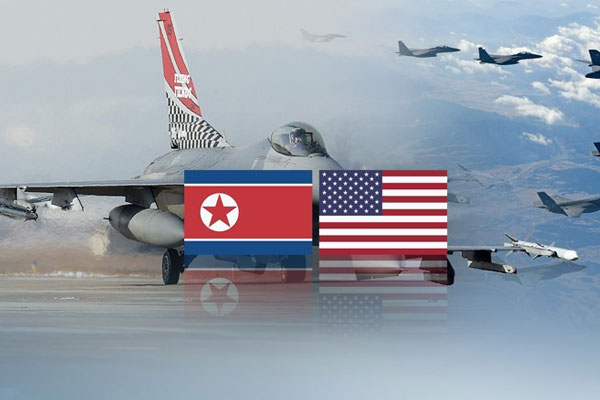 "After close consultations and careful consideration, Minister Jeong and I jointly decided to postpone this month's combined flying training event."

South Korea and the United States will put off their joint fighter jet exercise set for this month on the Korean Peninsula.

Defense Minister Jeong Kyeong- and his U.S. Mark Esper announced the decision Sunday after a bilateral meeting on the sidelines of the ASEAN Defense Ministers' Meeting-Plus in Bangkok.

"We encourage the DPRK to demonstrate the same as it considers decisions conducting training, exercises and testing."

“The ROK-US alliance remains ironclad and our combined military forces stand ready to fight tonight. We’re fully committed to working together to maintain security and stability... ”

Seoul and Washington had planned to conduct a scaled-back fighter jet training in lieu of the larger Vigilant Ace annual exercise. The U.S. the reduced scale was in consideration of diplomatic efforts with North Korea.

Despite the overture, North Korea threatened “shocking punishment” if the exercise went ahead, while adding that a full cancellation would be regarded as a positive gesture by President Donald Trump.

Just ten hours after the allies announced the decision, Trump sent a tweet directly addressing North Korean leader Kim Jong-, saying "I am the only one who can get you where you have to be. You should act quickly, get the deal done. See you soon!"

Following the collapse of their second summit in Hanoi this past February, Trump and Kim held a surprise face-to-face at the inter-Korean truce village of Panmunjom at the end of June.

The two sides, however, have since been unable to revive momentum for initially created during their first meeting in Singapore last year.

They remain at odds over what degree of is sufficient for lifting US-led international sanctions against North Korea.

Despite the allies' decision to skip military drills on the Korean Peninsula, Pyongyang continues to demand that the U.S. its "hostile" policies against it before re-engaging in dialogue.

Following a meeting with Russian Foreign Minister Sergei Lavrov in Moscow on Wednesday, Choe was asked by South Korean reporters if she has a message for the U.S.

Do you have a message for the U.S.?

"I don't have a message, but I believe that nuclear issues will be off the negotiating table going forward. To negotiate with the U.S. the future, in order to discuss nuclear issues again, it should withdraw hostile policies against [North Korea]."

Do you think it is impossible to launch negotiations again this year?

"Perhaps after the U.S. a strategic decision to withdraw its hostile policies against [North Korea] but before that, I personally think that nuclear issues are off the negotiating table."

Then do you think it would be impossible to hold a North Korea-US. for the time being?

"That's between the leaders to decide. I'm not in a position to say what the leaders will do. But it would be impossible for the U.S. continue its hostile policy and keep its current stance. In that sense, I can say that we wouldn't be too interested in holding summits or high-level meetings."