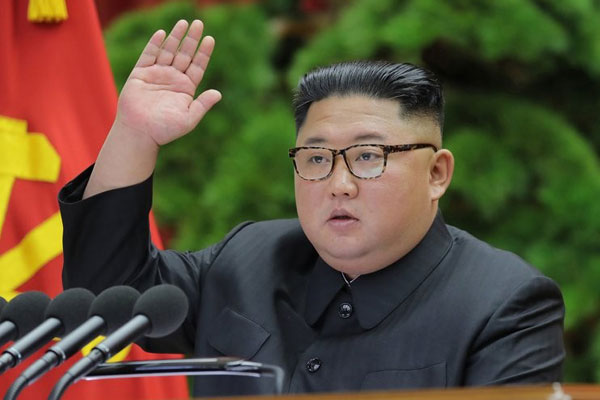 At a meeting of the Central Committee of North Korea's ruling Workers' Party that ended on Tuesday, regime leader Kim Jong- said there were no longer grounds for Pyongyang to be bound by a self-imposed moratorium on nuclear and long-range missile tests.

According to the state-run Korean Central News Agency on Wednesday, Kim said the United States responded to efforts to build confidence in their talks with joint military drills with South Korea and more sanctions on the regime.

Kim accused the U.S. stalling for time in their negotiations for the sake of political interests.

The North Korean leader warned that the world will soon witness the regime's "new strategic weapon," vowing to continue to develop such capabilities unless the U.S. its hostilities and there exists a permanent peace regime on the Korean Peninsula.

While Kim didn't elaborate further, many experts in South Korea and the U.S. he could have been referring to an upgraded intercontinental ballistic missile supporting a multiple independently targetable reentry vehicle or a submarine-launched ballistic missile.

Although Kim warned of "shocking” action, he also left the door open for dialogue with Washington, saying the scope and depth of bolstering the regime's nuclear deterrent will be "properly coordinated" depending on the U.S.’ attitude in the future.

Hours later on New Year’s Eve, U.S. President Donald Trump told reporters at his Mar-a-Lago resort in Florida that Kim is a "man of his word" and will keep his promises under their 2018 Singapore summit deal.

While Trump seemingly remains committed to diplomacy with Pyongyang, especially as renewed tensions with the regime could hurt his reelection campaign, his former national security adviser apparently believes otherwise.

On Twitter Wednesday, John Bolton said Washington should fully resume its joint military exercises with Seoul, which were suspended or downsized in support of diplomatic efforts regarding North Korea.

The hawkish former aide, who had been critical of the scaled down exercises, called for congressional hearings on whether American troops on the peninsula are “truly ready to fight tonight.”

The South Korean government, meanwhile, expressed concern over the North's latest threat, with the Unification Ministry releasing a statement urging Pyongyang to refrain from testing the "new strategic weapon" and move forward in stalled peace efforts.