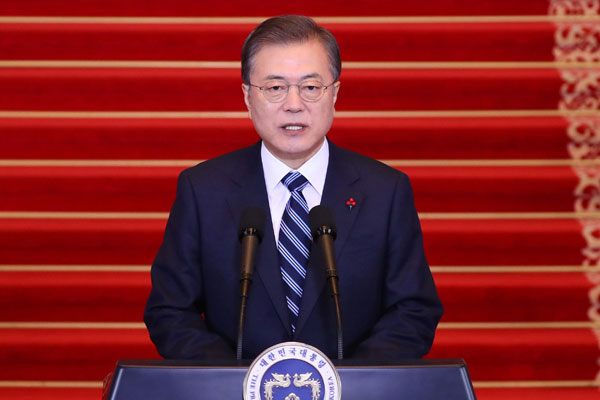 President Moon Jae-in says the two Koreas shouldn't give up their unaccomplished project of reconnecting inter-Korean railways severed by the Korean War.

"If South and North Korea find a realistic solution to realize the project of linking railways between them, it can lead to international cooperation and also provide the groundwork to revive inter-Korean tour projects and tourism in North Korea."

In his New Year’s address on Tuesday, Moon reiterated his commitment to reviving inter-Korean projects that have been banned under U.S.-led nuclear sanctions against Pyongyang.

While reiterating his will to reopen the Gaeseong industrial complex and South Korean tours to Mount Geumgang in the North, Moon also suggested ways to turn the demilitarized zone(DMZ) into a global peace zone.

"[South and North Korea] have the experience of jointly registering [Korean wrestling] "ssireum" as a UNESCO intangible cultural heritage. The demilitarized zone is a place of ecological and historical significance, containing great value of inter-Korean reconciliation and peace. Jointly registering the DMZ on UNESCO's World Heritage List is something that we can start right away. I hope North Korea responds positively."

Seoul will also continue efforts for the two Korea's joint hosting of the 2032 Olympic Games and invited North Korea to participate in international weightlifting and ping-pong championships in South Korea this year.

During his 25-minute speech, Moon confessed that his administration had expected that progress in Washington-Pyongyang dialogue would lead to further improvements in inter-Korean relations.

But with denuclearization talks in a stalemate, Moon explained that Seoul has to pursue what it can to rekindle the struggling momentum for his peace initiative.

With joint efforts adding up, the South Korean president said he hopes the two sides work to create an environment that would allow an inter-Korean summit to take place in the South.

Moon said the two Koreas belong to what he called a "community of life," and he believes North Korean leader Kim Jong-un must have the same thing in mind.