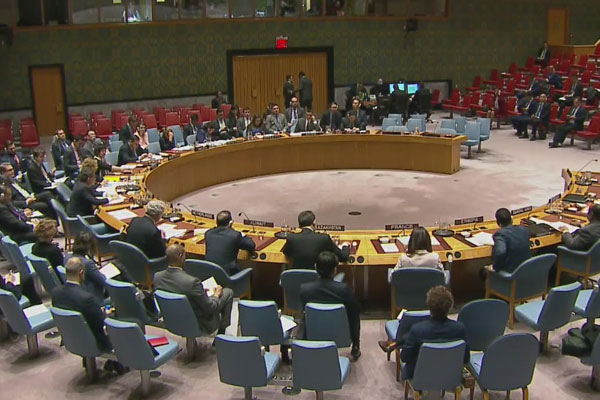 European members of the United Nations Security Council have condemned North Korea's latest missile launch as a clear violation of UN resolutions and urged the regime to engage in "meaningful" negotiations with the United States.

France's Ambassador to the UN, Nicolas Riviere, said Britain, France and Germany  requested the meeting because of their "deep collective concern" about Pyongyang's test-firing of what they called a new submarine-launched ballistic missile last Wednesday.

He said the UN Security Council urged North Korea to engage in good faith in meaningful negotiation with the United States and to take concrete steps with a view to abandoning all weapons of mass destruction and ballistic missile programs in a complete, verifiable and irreversible manner. He also stressed that there is no other way to achieve security and stability on the Korean Peninsula and in the region.

Following the joint statement, North Korea on Thursday lashed out at the European countries, calling the statement a “grave provocation”.

The remarks were said by the North’s Foreign Ministry spokesperson, according to the Korean Central News Agency, Pyongyang’s official gazette.

The spokesperson said North Korea's patience has its limits and that the test was a justified measure for self-defense.

The North also accused the UN Security Council of not taking issue with the recent U.S. of the Minuteman-III intercontinental ballistic missile.

The spokesperson's statement warned that Pyongyang might reconsider the preemptive steps it has taken to build trust with Washington.

Such steps are believed to refer to suspending nuclear tests and the launch of ICBMs.