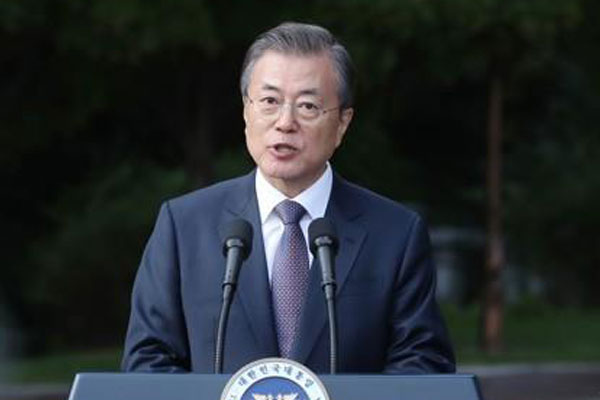 President Moon Jae-in has called for the international community's support for his campaign to co-host the 2032 Olympic Games with North Korea.

Moon on Friday invited nearly 130 ambassadors representing their countries and international organizations to the presidential office.

"The Republic of Korea will also spare no effort to facilitate the success of the relay of in East Asia with the 2020 Tokyo Olympics and the 2022 Beijing Winter Olympics to come. In addition, I would like to ask for your unwavering attention and support to ensure that the fervor of peace and unity that was on display in Pyeongchang will be sustained all the way to the 2032 Seoul-Pyongyang Olympics."

At the garden reception, Moon also reminded the ambassadors of his plan to turn the demilitarized zone dividing the two Koreas into an international peace zone.

The remarks come as the Moon administration is struggling to maintain momentum for improving cross-border ties.

"Right now, Korea is faced with the challenge of instigating a historic change in the name of and permanent peace on the Korean Peninsula. We now stand in front of the final hurdle. Only when we overcome this hurdle will we be able to usher in a bright future without going back to the era of confrontation... "

Since the third inter-Korean summit between Moon and North Korean leader Kim Jong-un last year, the two Koreas have been unable to find a further breakthrough, with the nuclear talks between Washington and Pyongyang locked in a stalemate.

Pyongyang is unhappy with Seoul for failing to relieve sanctions pressure from Washington, which have prevented inter-Korean and other projects from rekindling the North Korean economy.