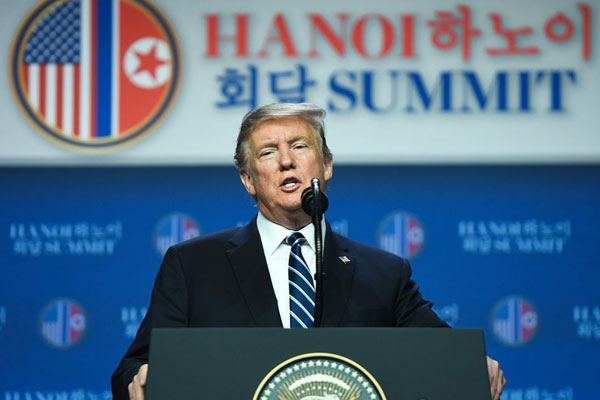 After two-days of meetings in Hanoi, U.S. President Donald Trump and North Korean leader Kim Jong-un canceled both a working lunch and a much anticipated joint signing ceremony Thursday.

President Trump held a press conference two hours ahead of schedule, saying they collided over the issue of easing sanctions.

Motorcades for both the North Korean leader and the U.S. president were seen leaving the summit venue hours before the two were scheduled to conclude their talks.

"There’s other things you haven’t talked about that we found that the people didn’t know about."

"Exactly. And we brought many points up. I think they were surprised we knew. If we did the one level and gave up all of that leverage that’s been taking a long time to build... "

Standing next to Trump, U.S. Secretary of State Mike Pompeo said that the talks didn't go all the way despite the progress.

"I'm hopeful the teams will get back together. It's a very complex problem and we've said since the beginning that this will take time.I think as we continue to work on this in the weeks and months ahead, we can continue to work towards the denuclearization of North Korea."

President Trump says the two sides will continue to talk, and said he feels confident that the gap over denuclearization and sanctions will be bridged "with time."