Moon looks to bridge gap between U.S. and North 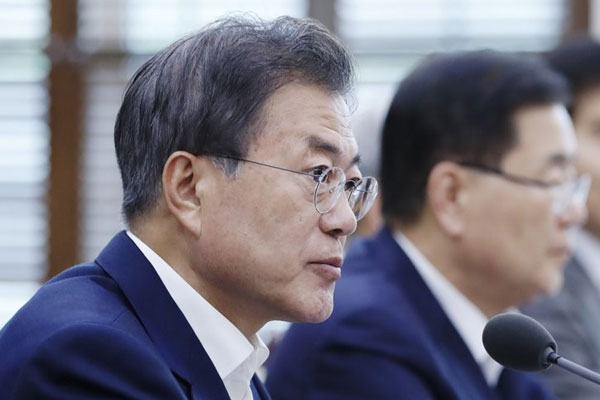 The South Korean president is trying to reduce the gap between Washington and Pyongyang in the wake of the collapse of their nuclear summit last week.

"We hope the two leaders will meet in the near future and reach an agreement that was delayed... In that process, our role has again become important."

"We believe that the North Korea-U.S. talks will eventually work out but do not want a long stalemate."

"The dismantlement of the Yongbyon nuclear facility, which is the foundation of the North Korean nuclear development, is now within a visible range along with the U.S. inspection and verification. If the plutonium reprocessing and uranium enrichment facilities of Yongbyon are completely dismantled, the North Korean denuclearization will enter into an irreversible phase."

North Korea had started to dismantle a key long-range missile launch test site last year as part of its pledge to work towards denuclearization.  Satellite images, however, now suggest the North could have begun rebuilding the Sohae Satellite Launching Station.

U.S. President Donald Trump says he would be disappointed if it is true.

"But I would be very, very disappointed in Chairman Kim, and I don't think I will be, but we'll see what happens. We'll take a look. It'll ultimately get solved..."

Speaking to reporters at the White House on Wednesday, Trump addressed the recent analyses that followed the collapse of his nuclear negotiations with North Korean leader Kim Jong-un.

“We have a very nasty problem there. We have to solve a problem. The relationship is good. I would be very disappointed if that were happening. It's a very early report. We're the ones that put it out."

White House Spokeswoman Sarah Sanders said Washington is continuing to have conversations with North Korea over the matter.

"Sarah, is North Korea already violating its promise to freeze its nuclear capabilities?

"Look, we're continuing to have ongoing conversations with North Korea. As the president has said, we'll see what happens. Beyond that I'm not going to comment one way or another on any potential intelligence, whether it's accurate or not, on either way."

After analyzing satellite images taken on Saturday, the think tank Center for Strategic and International Studies(CSIS) said North Korea is pursuing a rapid rebuilding of the facility in Dongchang-ri on the nation's northwestern coast.

The North decided to shut down the site as it sought to build trust with South Korea and the U.S. Satellite images from August showed workers had started to disassemble the facility.

CSIS said the latest move at the Sohae station is "deliberate and purposeful" following the Hanoi talks.