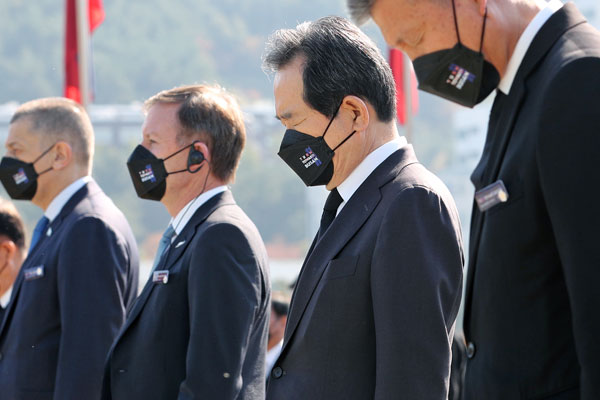 An annual commemoration was held on Wednesday in South Korea's southern port city of Busan to pay respect to foreign soldiers who fought during the 1950-53 Korean War. President Moon Jae-in also marked the day, promising to safeguard the pride and honor of veterans by ensuring South Korea’s peace and prosperity.

At 11:00 am on November 11, the world was asked to "Turn Toward Busan," where Korean war veterans gathered at the United Nations Memorial Cemetery of Korea.

A 21-gun salute was fired and participants observed a minute of silence, paying their respects to the fallen war heroes.

Hosted by Prime Minister Chung Sye-kyun, this year’s "Turn Toward Busan" commemoration brought together some 150 people, including war veterans and their families, as well as key officials from the UN Command and countries that sent troops and medical support to help South Korea defend the country.

The prime minister stressed that the war veterans made South Korea possible today.

Ahead of the commemoration, South Korea launched a public advertisement around the world, thanking elderly service members who fought alongside the country during the war.

The 30-second clip honoring foreign veterans began airing on electronic billboards in New York, London and Bangkok. The public ad has been provided to overseas broadcasters like the BBC and CNN, and also posted on YouTube.

This year marks the 70th anniversary of the outbreak of the three-year war. The two Koreas are still technically at war, since fighting ended with a ceasefire agreement signed in 1953 and not a peace treaty.