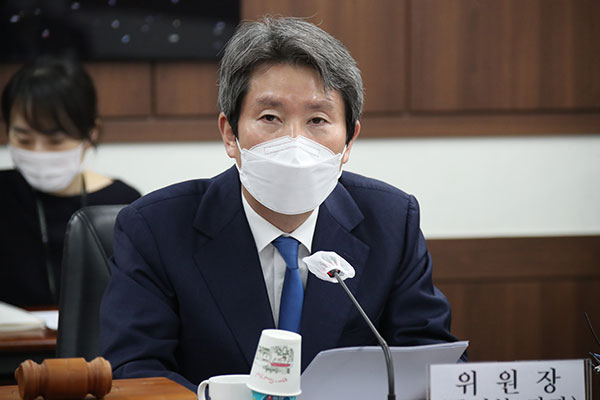 Appearing on KBS Wednesday night, Seoul's Unification Minister Lee In-young suggested various ways Washington and Pyongyang can rekindle their stalled talks next year when President-elect Joe Biden is inaugurated. He said coronavirus vaccines and the USS Pueblo held as a trophy in North Korea might provide solutions for Seoul and Washington to resume talks with the North.

"President-elect Biden during his campaign opened the possibility that if North Korea reduces its nuclear capacity a summit can be held conditionally. That is in a way more similar to our Korean Peninsula Peace Process [initiative], which proposes reaching a comprehensive deal on the denuclearization process and implementing the agreements gradually."

Amid promising news reports on the development of COVID-19 vaccines, he hinted that the shots could be a game changer between the two Koreas.

And for Washington, he suggested a possible return of the USS Pueblo, which was seized by North Korean patrol boats in 1968 and is currently used as a museum ship in Pyongyang, could provide a breakthrough in reviving dialogue with Pyongyang.

"Don’t the repatriation of the remains of fallen U.S. soldiers and other small measures take place occasionally to build trust between North Korea and the U.S.? If Pyongyang repatriates the USS Pueblo to Washington, I think it will be taken as a very proactive measure for building trust, and in that sense, it can provide a significant opportunity to promote dialogue and negotiations based on trust."

President-elect Biden in 2008 co-sponsored Senate Resolution 423, "Seeking the return of the USS Pueblo to the United States Navy."

Its 82 crew members returned home in December of 1968 but the USS Pueblo remains the only U.S. naval ship held captive in a foreign country.

Without such topics on the table, Lee couldn't rule out the possibility of military action by the North in March when South Korea and the U.S. are scheduled to hold their annual drills together.

"There were such cases during the Obama administration and I cannot rule out the possibility. When President Obama discussed  'a world without nuclear weapons,' North Korea launched missiles and nuclear tests. But at the same time, I believe that North Korea [retrospectively] reexamined if its previous policy was right. I think that it is more likely that North Korea would take a flexible approach... "

While refusing to discuss the possible dispatch of a South Korean presidential special envoy to Pyongyang, Lee noted that he is ready to hold what he called a "superlative meeting" with the North at any time, any place.