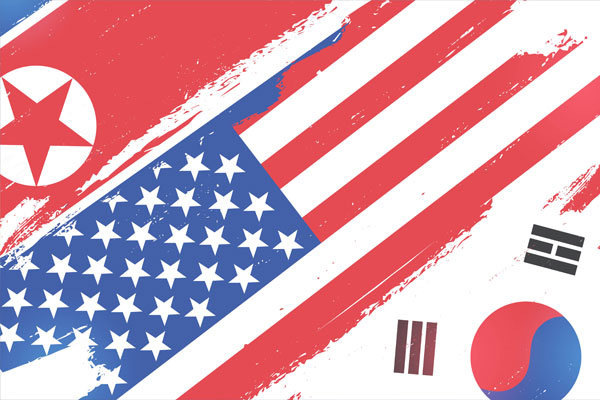 The Korean Peninsula peace process has been at a standstill since the no-deal summit between North Korea and the U.S. in Hanoi in 2019. Attention turns to whether South Korea’s new foreign minister Chung Eui-yong will contribute to resuming the peace initiative. In his inauguration speech on February 9, Minister Chung said that the Korean Peninsula peace process is not an option but a path that must be taken.

At present, however, the diplomatic situation is not entirely favorable for the new foreign minister. He is entrusted with an important mission to strengthen the South Korea-U.S. alliance under the Biden government and resolve numerous pending bilateral issues. Here is political commentator Lee Jong-hoon with more.

When nominating Chung as new foreign minister, the presidential office in Seoul described him as a veteran official who has devoted his life to diplomacy and security. It expressed high expectations that he would be able to raise South Korea’s diplomatic status to a higher level by developing the government’s diplomatic policies successfully.

Chung previously worked for an intellectual property council under the World Trade Organization. Under the Moon Jae-in government, he served as presidential chief for national security affairs. It’s fair to say that he is an expert who has extensive experiences in diplomacy, security and trade. The career diplomat is expected to show diplomatic flexibility to be in sync with the foreign affairs team of the Biden administration.

While presenting an appointment certificate to Chung on Monday, President Moon Jae-in highlighted the opportunity to make final efforts toward a successful peace process on the Korean Peninsula. Notably, Moon said it’s true that there’s not much time left but he’d like to ask the new foreign minister not to hurry for a visible result within a given time frame. He added that a calm and orderly approach would be necessary.

In fact, the president has repeatedly called for prompt communication between South Korea and the U.S. to resume North Korea-U.S. dialogue. Attention is drawn to why he asked the foreign minister to take time, even though he has only about a year left in office.

In a New Year’s press conference on January 18, Moon expressed his hope for swift exchanges between the leaders of South Korea and the U.S. to reaffirm the need for the Korean Peninsula peace process. During his phone conversation with U.S. President Joe Biden on February 4, he also said that it would be necessary for Seoul and Washington to map out a comprehensive strategy toward North Korea in cooperation as early as possible.

But he requested the new foreign minister not to rush. That’s because the Biden administration has yet to set any clear policy direction for North Korea-related issues. In this situation, South Korea is unlikely to produce an outcome anytime soon, even if it pushes ahead with something hurriedly.

While speaking with Moon over the phone on February 4, Biden said that it’s important for the U.S. and South Korea to have the same position. This means that there is actually a difference of opinion between the two countries, as to how to approach North Korea.

In a parliamentary confirmation hearing on February 5, Chung Eui-yong said that he believes North Korean leader Kim Jong-un is willing to denuclearize his country. But the U.S. assessed otherwise immediately, saying that North Korea still has a desire for nuclear weapons development. A recent CRS report says that Moon generally favored offering more concessions to North Korea than Trump, creating periodic tensions, a dynamic likely to continue with the Biden administration.

Given that, the Biden government may not accelerate the process of resolving the North Korean nuclear issue, contrary to Moon’s expectations. The nuclear talks between North Korea and the U.S. may not produce any results during Moon’s term.

Meanwhile, the Biden government is pressing ahead with three-way cooperation among South Korea, the U.S. and Japan. The U.S. State Department said last week that current tensions between South Korea and Japan are regrettable and that the Biden-Harris administration could work to improve their relations for the purpose of strengthening relationships between allies. Citing the phone conversation between U.S. Secretary of State Tony Blinken and South Korea’s Foreign Minister Chung Eui-yong, the State Department said that Blinken congratulated Chung on his new assignment and underlined the importance of continued cooperation among South Korea, the U.S. and Japan. But the Japanese government says that South Korea-Japan relations remain unchanged, despite the appointment of a new foreign minister in South Korea.

It remains to be seen how and whether the new South Korean foreign minister will resolve the Seoul-Tokyo relations that have been strained due to historical issues involving victims of Japan’s wartime sexual slavery and forced labor.

Biden highly values cooperation among allies. It is easy to guess that the U.S. doesn’t want to see a prolonged conflict between South Korea and Japan. The CRS report says that relations between South Korea and Japan have worsened to their lowest levels in decades, affecting the three-way policy coordination among the two countries. It also says that the U.S. addressing Seoul-Tokyo relations is one of the challenging tasks of the new South Korean foreign minister.

Another grave task faced by Minister Chung is to analyze a battle for global hegemony between the U.S. and China.

Regarding the issue of joining Quad, which is a security cooperation mechanism involving the U.S., Japan, Australia, and India to keep China in check, Chung said in a press meeting that South Korea can cooperate with any regional forum, as long as it is open and inclusive and conforms to international norms.

While South Korea finds it increasingly difficult to make a choice between the U.S. and China, it needs to expand its diplomatic scope through strategic diplomacy.

Minister Chung is faced with a myriad of daunting tasks to contend with in order to push for the Seoul government’s peace process. While the South Korean government hopes to reactivate the Korean Peninsula peace process based on the agreement reached between North Korea and the U.S. in Singapore, the Biden government is skeptical about the result of the North Korea-U.S. negotiations under the Trump administration. South Korea should remember that it is a key player in the process of achieving a nuclear-free Korean Peninsula and have its opinion fully reflected in that process through close policy coordination with involved countries.