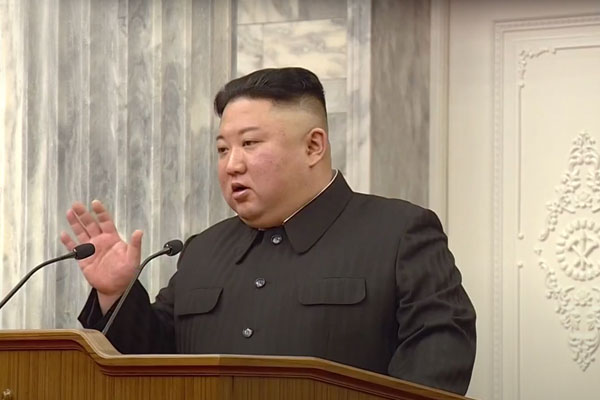 On the occasion of the ninth anniversary of North Korean leader Kim Jong-un’s coming to power, the nation’s official Rodong Sinmun newspaper urged high officials and the people to stay loyal, saying that the leader provided a decisive momentum to strengthen the party and complete the feat of self-reliance or juche revolution. Here is Cho Han-bum, senior researcher at the Korea Institute for National Unification, to explain the significance of Kim Jong-un’s leadership, which enters its tenth year in 2021.

Kim Jong-un was an unprepared leader. He appeared as successor in 2009. When his father suddenly died in December 2011, he was in his mid-20s, having been groomed as the next leader for only three years. That’s why many were skeptical about his leadership in the early period. Dismissing the early concerns, however, the young leader has managed to hold out for nearly ten years, despite some incidents like the brutal execution of his uncle Jang Song-thaek and the assassination of his half-brother Kim Jong-nam in the process. While the leader has strengthened his power base successfully, his regime now faces the worst economic crisis.

In December last year, the Pyongyang Publishing House released a biography of leader Kim Jong-un titled “The Great Man and the Age of the Powerful Country.” The book describes the leader’s achievements in various areas including defense, diplomacy, economy, society and culture over the last nine years. The most notable part is the country’s nuclear capabilities. The book explains in detail North Korea’s hydrogen bomb test in 2016 as well as a test of H-bomb for an intercontinental ballistic missile or ICBM and the test launches of two types of ICBMs, namely, Hwasong-14 and Hwaswong-15, in 2017. North Korea actually declared completion of its “state nuclear force” in 2017, the sixth year of Kim Jong-un’s leadership.

The North Korean nuclear issue has been an international concern for more than 30 years. While former leader Kim Il-sung was alive, North Korea was in the initial phase of nuclear weapons development. The North has carried out a total of six nuclear tests so far, with the first one occurring in 2006 and the second one in 2009 during the rule of former leader Kim Jong-il. The other four tests all took place under the Kim Jong-un regime.

While Kim Jong-il tried to strengthen his country’s bargaining power through nuclear development, Kim Jong-un has sought to develop nuclear weapons first before engaging in any negotiations. In his dual pursuit of nuclear and economic development, nuclear development, in fact, comes first, followed by economic growth. That is, North Korea concentrates all its resources on atomic weapons development and then holds negotiations using its nuclear programs as leverage. Under the Kim Jong-un regime, North Korea conducted the tests of nuclear warheads and ballistic missiles in a relatively short period of time. The country is believed to have secured significant nuclear capabilities.

In 2018, North Korea ended the parallel development policy of the economy and nuclear weapons. It instead adopted a new strategy of focusing on the economy with the purpose of building a socialist power.

At the party congress in January this year, however, leader Kim Jong-un admitted to the failure of his economic policies. During the recent meeting of the secretaries of party cells, he also called for the country to prepare for another “Arduous March,” saying that the economy is not in good shape. The Arduous March refers to the difficult period in the 1990s when North Korea suffered from an extreme economic contraction.

From 1994, when former leader Kim Il-sung died, to 1997, hundreds of thousands of North Korean people starved to death. The painful period is known as the “Arduous March” in North Korea. The phrase “Arduous March” reminds North Koreans of such a horrible experience that they wouldn’t even want to recall. But leader Kim Jong-un says that he is determined to carry out an even tougher Arduous March. This reflects that the North Korean economy is facing its worst-ever situation, due to the COVID-19 pandemic, the prolonged international sanctions against the country and last year’s massive flood damage.

Meanwhile, in an article about the ninth anniversary of Kim Jong-un’s taking office, the Rodong Sinmun newspaper stresses that the party policies all serve the interests of the people. On the last day of the party congress in January, the leader presented three slogans, namely, “serving the people is serving the heaven,” “single-hearted unity” and “self-reliance.” The first slogan represents Kim’s ruling philosophy to put priority on the people. While former leader Kim Jong-il adopted “military-first politics,” the current leader advocates “people-first politics.”

Kim Jong-un has emphasized his love for people since his early years in office. In fact, his power base was quite weak when he took power, compared to his predecessors’. He often imitated his grandfather, but he didn’t have any achievements to show off and lacked political legitimacy. He needed to create his own image, and he chose a “people-friendly” approach. By promoting his image as a leader who approaches closer to the people and cares for them, he has sought to elicit loyalty from the pubic and strengthen his power base.

Regarding Kim Jong-un’s diplomatic activities, his summit talks with South Korea and the U.S. did attract worldwide attention, but the results were not very satisfactory.

Kim held three inter-Korean summits in 2018. He also held a summit with former U.S. President Donald Trump twice—the first summit in Singapore in June 2018 and the second one in Hanoi in February 2019. Kim and Trump also briefly met at the inter-Korean truce village of Panmunjom in June 2019. The North Korea-China summit has taken place five times, while the North Korea-Russia summit has occurred once. The previously reclusive North Korean leader drew international attention through his summit diplomacy, which, however, turned out to be a mere show without substance.

While he may have raised his international profile, he is not regarded as a respected leader at all, partly because of the dire human rights situation in his country. Speaking of diplomatic outcomes, nuclear negotiations between North Korea and the U.S. have come to a complete standstill, while inter-Korean dialogue has been deadlocked.

Due to harsh international sanctions, North Korea has little elbowroom to maneuver in the diplomatic arena. Domestically, economic difficulties are deteriorating public livelihoods further. Moreover, it is not easy for North Korea to manage relations with the Biden government in the U.S. Leader Kim Jong-un stresses self-reliance to implement the nation’s new, five-year economic development plan. But the prospects are not very bright.

The Biden administration is very unlikely to make any concession at nuclear negotiations with North Korea. On the contrary, it has brought up the issue of human rights abuses in North Korea. The North Korean economy is sinking deeper and deeper into the mire. In this situation, it’s a shame that Kim Jong-un has not shown any new vision. Rather, he only seeks to strengthen internal unity and control society more strictly by convening various meetings and conferences.

After all, North Korea needs to adopt the policy of reform and openness, and find a solution in inter-Korean relations. The North Korean regime flourished in the early 2000s, when the two Koreas carried out joint economic projects based on mutual trust. North Korea should cooperate with South Korea, improve its relations with the U.S. by reaching a compromise at their denuclearization talks, get its sanctions lifted and join the global economic community. This should be North Korea’s future. If the country chooses reform and openness, it will surely have a chance to develop its economy.

The North Korean leader has an important mission to resolve tricky diplomatic issues and show a new path to his people.

With his leadership entering its tenth year, it remains to be seen whether his regime will see a major turning point.