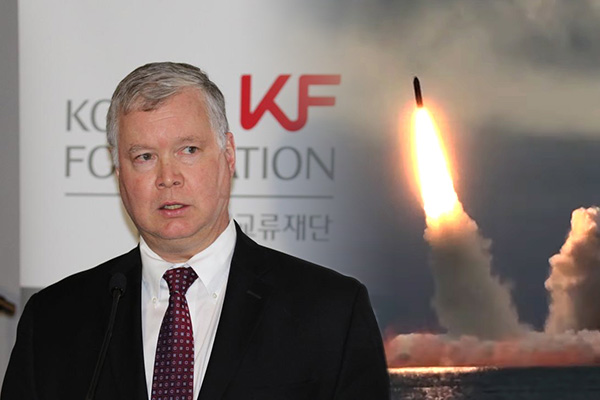 On December 7th and 13th, North Korea said that it had conducted an “important test,” stoking tensions in the region. Under these circumstances, U.S. Special Representative for North Korea Stephen Biegun publicly proposed a meeting to North Korea on Monday. But the North has remained silent about the offer, casting a cloud over denuclearization negotiations between the two countries. Here is Professor Chung Dae-jin from the Institute of Unification at Ajou University with more.

North Korea has told the U.S. to present new calculations in their denuclearization talks before the year ends. By sending Biegun to South Korea, the U.S. is showing to North Korea that it is working hard to keep their dialogue momentum afloat. During his stay in South Korea early this week, Biegun actually offered to meet with North Korean officials.

Although there is a dialogue channel between Pyongyang and Washington, Biegun flew all the way to Seoul, despite his tight domestic schedule before his appointment as deputy secretary of state, to publicly propose a meeting with North Korea. This indicates that their behind-the-scenes channel of communication is not working properly.

Biegun says that the U.S. has no deadline for denuclearization talks with North Korea. Through the remarks, Washington expressed its determination to keep the nuclear negotiations going.

Biegun’s three-day visit that started last Sunday raised expectations for contact between Pyongyang and Washington and a turnaround in regional diplomacy. However, he failed to receive a reply from the North and departed for Japan on Tuesday.

North Korea seems to be thinking that the U.S. has yet to come up with a new proposal. In fact, there is little change in Washington’s attitude toward Pyongyang. In this situation, the North believes it is unnecessary to answer Washington’s call for a meeting that is expected to produce nothing.

North Korea has been stepping up its pressure against the U.S. by conducting what it calls an “important test” on two different occasions early this month. The two tests are assumed to involve an engine for an intercontinental ballistic missile or ICBM. But the North kept silent during Biegun’s stay in South Korea, probably thinking that it will be pointless to accept Washington’s dialogue offer for now.

There are concerns that North Korea may go as far as to declare an end to its denuclearization negotiations with the U.S.

In the meantime, things have taken a new turn. China and Russia submitted a draft resolution to the U.N. Security Council on Monday, calling for the easing of some sanctions on North Korea. The two countries have never taken a measure like this in the midst of nuclear negotiations between North Korea and the U.S.

I think they are putting pressure on the U.S. jointly with North Korea. Also, peace and stability on the Korean Peninsula is highly important for their own national interests. They don’t want the security conditions in the region to go back to 2017, when tensions were so high. By presenting such a draft resolution, Beijing and Moscow wanted to discuss ways to ease sanctions on the North and prevent Pyongyang from resorting to provocations like an ICBM test at the end of this year or early next year.

The new draft calls for the Security Council to lift the ban on North Korea’s exports of seafood and textiles and stop sending North Korean workers abroad back home. It also proposes exempting inter-Korean rail and road cooperation projects from U.N. sanctions. Through this resolution, North Korea is expected to see if the U.S. has the intention of easing sanctions.

However, the U.S. said on Monday that it is not the time to consider sanctions relief. Since the U.S. has dismissed the idea, the draft resolution proposed by China and Russia has, in effect, become useless. Still, cooperation between North Korea, China and Russia is strengthening.

As the conflict between North Korea and the U.S. spills over to the international community, Biegun made a surprise visit to China on Thursday.

After China and Russia presented the draft resolution out of the blue, the U.S. seemed to believe that the collaborative international stance on North Korea was beginning to weaken. The U.S. can’t just sit idle, which prompted Biegun to make a previously unannounced trip to China by extending his East Asian travel schedule. In China, he is expected to deliver Washington’s position about sanctions on North Korea and highlight the importance of concerted international efforts toward the North’s denuclearization.

The U.S. State Department says that Biegun is visiting China on Thursday and Friday to discuss the need to maintain international unity on North Korea. Apparently, the U.S. is wary of the possibility of closer relations between the North, China and Russia and therefore putting a brake on the Chinese and Russian move to break away from the international sanctions on Pyongyang.

North Korea, meanwhile, may take issue with the rejection of the resolution and choose to seek a new path. The decision could be made at the plenary meeting of the Workers’ Party’s central committee late this month.

Amid no progress in negotiations with the U.S., the Workers’ Party meeting later this month could be the venue where North Korea may declare an end to its self-imposed moratorium on nuclear and long-range missile tests and express its determination to build its economy independently and seek military confrontation based on its nuclear power.

North Korea recently conducted an engine combustion test twice, which is widely regarded as the stage before an ICBM test-launch. The North has not reported the test domestically. If they choose to seek a new path at the party meeting, we have to see whether the regime will announce the decision in public and if so, how it explains the decision to the people.

With less than two weeks left before the year-end deadline set by North Korea, the international cooperation regarding the sanctions on Pyongyang is showing signs of weakness. We’ll have to wait and see what decision the North will make in the coming weeks.