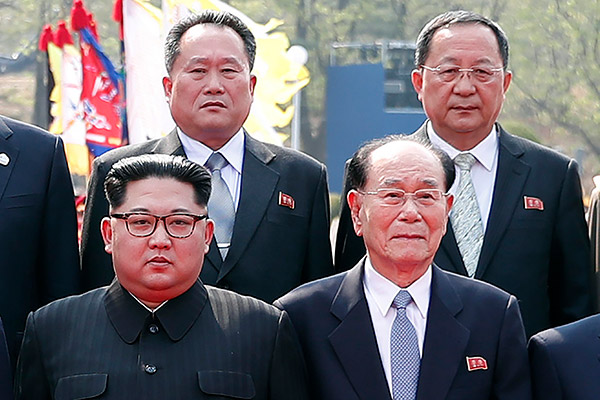 On January 23rd, North Korea’s state media delivered the news about the appointment of Ri Son-gwon as the nation’s new foreign minister. Today, we’ll discuss how the shakeup in North Korea’s diplomatic lineup may influence the nation’s foreign policies with Professor Chung Dae-jin from the Institute of Unification at Ajou University.

Last week, the North’s Korean Central News Agency confirmed Ri’s appointment as the nation’s top diplomat, while reporting the foreign ministry’s banquet for ambassadors based in Pyongyang during the Lunar New Year holiday. Ri, the former chairman of the North’s Committee for the Peaceful Reunification of the Country, replaced his predecessor Ri Yong-ho, who became the nation’s foreign minister in 2016. Typically, North Korean foreign ministers have held the post relatively long, for five to ten years. Given that, Ri Yong-ho’s four-year term was rather short. He is believed to have been punished in part for the protracted deadlock in dialogue between North Korea and the U.S.

The new foreign minister is a former military figure who is widely known for his hawkish stance on South Korea, signaling that North Korea will take a hard-line approach to its negotiations with the U.S.

Around the plenary meeting of the Workers’ Party late last year, North Korea abruptly dismissed foreign minister Ri Yong-ho, a longtime diplomat who led two summits between North Korea and the U.S. Kim Yong-chol, former head of the United Front Department who led working-level negotiations with the U.S., was punished for the failure of the second North Korea-U.S. summit in Hanoi last year. Ri is assumed to have met the same fate for the stalled North Korea-U.S. dialogue. Professor Chung now explains about North Korea’s new foreign minister Ri Son-gwon in more detail.

Here in South Korea, Ri is notorious for his insulting remarks made to South Korean business tycoons, who visited Pyongyang in September of 2018 on the occasion of an inter-Korean summit. While eating the cold noodle of naengmyeon with the South Korean businesspeople, Ri said derisively, “Does the naengmyeon go down your throat?” It is roughly translated as “How can you eat at a time like this?” Ri also made fun of former South Korean Unification Minister Cho Myoung-gyon for being late to their meeting.

Now that a man with a tough stance toward South Korea has been named North Korea’s foreign minister tasked with diplomacy with the U.S., we’ll have to carefully watch Pyongyang’s next move.

It is unusual for North Korea to appoint a former army officer with little experience in diplomacy as foreign minister, indicating the regime’s determination to seek a “new path” presented by leader Kim Jong-un. During the party meeting at the end of last year, Kim pledged to make a “frontal breakthrough” to overcome international sanctions and those imposed by the U.S.

The recent change in the top diplomatic post shows North Korea’s resolve to pursue “self-reliance” on the economic front to tackle international sanctions and take a hard-line position on the U.S. while strengthening cooperation with China and Russia diplomatically. By letting hard-liner Ri lead the foreign ministry, Pyongyang also seeks to ease the military’s discontent with the previous policy of promoting dialogue with the U.S. Also, the North is demonstrating to the U.S. that it will strengthen its status as a nuclear weapons state by continuing with the development of nuclear and strategic weapons.

Another attention-grabbing part is the surprise reemergence of Kim Kyong-hui, former party secretary and the aunt of leader Kim Jong-un.

Kim Kyong-hui was seen watching a performance celebrating the Lunar New Year holiday along with leader Kim Jong-un and his wife Ri Sol-ju, indicating that she is still alive and well. It was her first public appearance in six years.

In North Korea, Kim Kyong-hui is indeed a symbolic figure. She is the daughter of the nation’s founder Kim Il-sung, the younger sister of former leader Kim Jong-il and the aunt of current leader Kim Jong-un. She is indisputably part of the so-called Baekdu Bloodline of the Kim family, which has upheld the revolutionary spirit of Mt. Baekdu. This spirit is considered all the more important at a time when the nation declared to attack head-on when confronting the U.S. By putting Kim Kyong-hui on the stage, North Korea showed that the Kim family remains undiminished and stressed the legitimacy of the Baekdu Bloodline once again. In doing so, the nation intends to strengthen domestic unity.

At present, North Korea is in great difficulty due to the stalled dialogue with the U.S. 2020 is the final year of the nation’s five-year economic development plan, but Pyongyang has not produced any visible outcome as a result of international sanctions. In this situation, the North showed the leader’s aunt in public in an apparent move to demonstrate the unity of the Baekdu Bloodline and tighten internal solidarity so that the nation can overcome the harsh sanctions.

North Korea is expected to get tougher on the U.S., as seen in the new foreign minister’s recent speech reported by NK News, a news outlet specializing in North Korea.

During the recent banquet for foreign ambassadors in Pyongyang, Ri emphasized the nation’s determination to push ahead with self-reliance and make a frontal attack. No doubt, the remarks are aimed at the U.S.  To build a self-reliant economy, the isolated regime needs assistance from the outside. North Korea seeks to address this problem by enlisting cooperation from China and Russia.

The North will hold the back door for China and Russia open, while locking the front door for the U.S. for the time being.

Last year, North Korea demanded that the Americans bring a new proposal in their stalled denuclearization talks before the year’s end, but the U.S. did not. Under these circumstances, North Korea believes that it is not appropriate to make concessions first. So, it will lock the door for dialogue and refuse to open it until Washington shows a change in its attitude. This year, North Korea is expected to maintain this position.

North Korea’s new foreign minister also implied that North Korea-U.S. relations could improve if Washington eases its hostile policy toward Pyongyang. The remarks reaffirm the North’s previous position that the U.S. should guarantee the security of the communist regime first before Pyongyang’s denuclearization.

Washington also remains unchanged in its own existing position. U.S. assistant secretary of state for East Asian and Pacific affairs David Stilwell said last week that the U.S. was not in a rush when it comes to diplomacy with North Korea.

U.S. President Donald Trump has habitually mentioned “no rush.” Direction is more important than speed, as far as Washington’s North Korea policy is concerned. The U.S. is sticking to its position that North Korea should present a detailed denuclearization roadmap before resuming dialogue and holding another bilateral summit. Just like Pyongyang, Washington will likely shut the door for dialogue with the North for now. Both sides maintain that they will open the door if the other side changes its attitude. I imagine the diplomatic battle between the two countries will continue for some time.

North Korea’s Vice Foreign Minister Kim Son-gyong will attend the Munich Security Conference that will kick off on February 14th. As U.S. Secretary of State Mike Pompeo is also expected to participate in the talks, attention is drawn to whether the security conference in Germany may possibly lead to North Korea-U.S. dialogue.