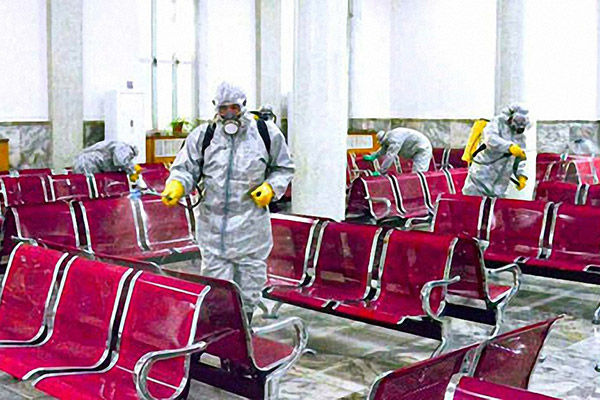 North Korea has been stepping up its efforts to prevent an outbreak of the new coronavirus in the country, calling the preventative measures an important political matter that could determine the fate of the country.

On February 2nd, Pyongyang said that there was no confirmed case of coronavirus in the country. The North takes this virus issue so seriously that the situation may even influence regional diplomacy. Here’s political commentator Choi Young-il with more.

North Korea has launched an emergency command post consisting of ministers and vice ministers. On Tuesday, the nation’s official newspaper Rodong Sinmun said that the ruling party took additional measures to help relevant units under the central emergency quarantine office enhance their capacity, organize projects, find any loopholes in preventative efforts and devise detailed countermeasures. The paper also said that those units would be strong enough to deal with the situation, as they have responsible workers from the Cabinet secretariat, the health ministry, the agricultural ministry and the commerce ministry.

Apparently, North Korea is focusing all its efforts on preventing the outbreak of the deadly virus.

On January 22nd, North Korea shut its borders and blocked foreign tourists from entering the country. On January 28th, the country declared a shift to an emergency system against the virus and decided to keep all foreigners arriving in North Korea via China quarantined for one month. On January 30th, it temporarily suspended the operation of the joint inter-Korean liaison office in the border town of Gaeseong. The following day, it closed all its air and rail routes to and from China and notified Seoul of its decision to postpone the demolition of South Korean facilities at its Mt. Geumgang resort.

North Korea’s medical infrastructure to fight infectious diseases is far weaker than that of advanced countries. Once in a while, North Korea has been hit by some epidemics that have disappeared in other parts of the world, resulting in higher infant mortality rates, as seen in statistics from international organizations.

At present, North Korea’s infrastructure is simply inadequate to handle the novel coronavirus. Once it enters the country, it could spread out of control. That’s why the North is hypersensitive about the possible outbreak of the contagious disease, taking more drastic measures than any other country.

The rapidly increasing number of Chinese tourists to North Korea is another reason why the North is working so swiftly to keep the virus at bay. More than 300-thousand Chinese tourists visited North Korea last year. The Beijing government has encouraged its nationals to travel to the North in an apparent move to give assistance to its communist ally through tourism, which is not subject to U.N. Security Council sanctions. But now, North Korea, which shares a border with China, is in a difficult situation as it has restricted Chinese people from entering the country as well as trade with China.

The letter and the donation are seen as North Korea’s diplomatic gesture toward China. For survival, the North had no other option but to seal its border with China. Still, it is under diplomatic pressure. If Beijing blames Pyongyang for turning its back on China, North Korea would have no country to depend on. So, the North has done all it could.

As a matter of fact, the impoverished North is not really in a position to send donations to China. The letter and donation show that North Korea is seeking China’s understanding about its latest quarantine measures.

The North Korean leader has also sent a New Year’s greeting card to the Chinese president. On Monday, the Korean Central News Agency announced the list of leaders, to whom Kim Jong-un sent greeting cards, and mentioned Xi Jinping first. North Korea-China relations will likely remain unchanged, thanks to Pyongyang’s diplomatic efforts, but the North’s economic difficulties may worsen further.

If North Korea fails to receive economic aid from China, with bilateral trade suspended, it could face a major economic crisis. By exporting its goods to China, North Korea has earned money and withstood strong sanctions imposed by the U.N. and the U.S. In this situation, the new coronavirus could drive the already struggling North Korean economy into a corner. As long as its border with China is closed, North Korea cannot hold out for long.

Suspension in trade with China may pose a risk to the North Korean economy. Trade with China accounted for a whopping 91.8 percent of the North’s overall external trade last year. If smuggling and unofficial trade involving North Korea’s private market or jangmadang is suspended as well, Kim Jong-un may have to change his policies.

During the plenary meeting of the Workers’ Party Central Committee late last year, Kim Jong-un urged his people to make a frontal breakthrough by building a self-reliant economy. North Korea has since made efforts to resolve economic difficulties by encouraging different industries, including agriculture, to produce results.

But without assistance from China, it is difficult for North Korea to achieve economic independence, no matter how earnestly it pursues “self-reliance.” If the new coronavirus is not contained quickly, North Korea might face a serious crisis.

In this situation, the communist regime finds it all the more necessary to get international sanctions eased. As a result, the virus problem may influence North Korea’s foreign policy.

If the virus issue remains unresolved for too long, North Korea may no longer endure the economic difficulties and could demand the swift resumption of nuclear negotiations with the U.S. for a one-shot big deal, which has been advocated by Washington. This almost impossible scenario is now being mentioned by some analysts. The fears of the new coronavirus outbreak, an unforeseen factor, may prompt North Korea to soften its attitude and therefore provide a turning point for relations between the North and the U.S.

While making frantic quarantine efforts to prevent an outbreak of the virus on its soil, North Korea could change its hard-line stance. The global spread of the new virus is emerging as a new factor that may affect diplomacy surrounding the Korean Peninsula.