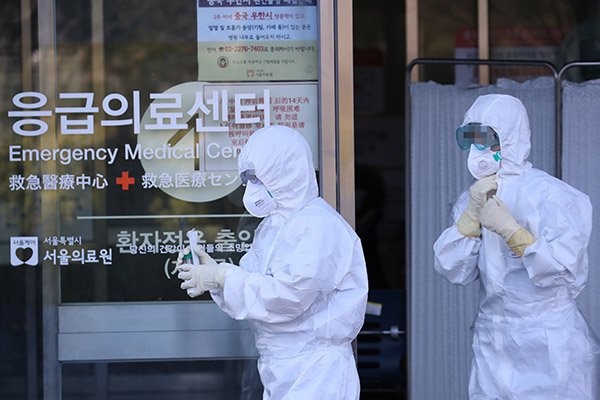 North Korea’s border shutdown made it difficult for the South to even propose individual tourism, rendering it almost impossible for Seoul’s plan to find a breakthrough in the stalled inter-Korean relations through tourism to Mount Kumgang. Here’s Myongji University Professor Lee Jong-hoon to explain more about the situation.

North Korea was the first country to ban the Chinese from entering its borders after the COVID-19 outbreak. The country is in emergency mode. It has even stopped the influx of foreign tourists from countries other than China. This isn’t the right time to push for inter-Korean projects like individual tourism. If not for the COVID-19 incident, North Korea may have accepted South Korea’s proposal for individual tourism instead of insisting on taking down South Korean-made facilities at the Mount Kumgang area. Seoul officials kept asking for a meeting with their Pyongyang counterparts to discuss this issue, but the viral infection has steered Seoul’s plan to a direction different from the one President Moon Jae-in had originally envisioned. Contrary to the South Korean government’s intention, this deadlock is likely to drag on for some time.

The South Korean government was bent on improving inter-Korean relations through individual tourism. From earlier this year, Seoul officials have been exploring various options to discuss this issue with Pyongyang, making it clear that individual tourism is not in violation of the United Nations’ Security Council resolutions nor the United States’ independent sanctions against the North.

Last Monday, South Korean officials sat down with Alex Wong, the State Department’s Deputy Assistant Secretary for North Korea, to ask for Washington’s cooperation and support for Seoul’s inter-Korean project ideas. But that meeting led nowhere as immediately afterwards Wong was appointed to be the alternative representative for special political affairs at the U.N., breaking up the Trump administration’s negotiation team for North Korean affairs.

To make matters worse, the U.S. Treasury Department recently named North Korea a “bad actor” and called for the international community’s help in sanctioning the communist regime. It is unclear how South Korea and the United States can narrow their differences on matters pertaining to North Korea.

North Korea allows individual tourists from other countries, although not yet from South Korea. The U.S. had also permitted its citizens to travel to North Korea before the Otto Warmbier incident. So, individual tourism was not in violation of the sanctions against North Korea. The South Korean government was determined to make it come true this spring and had gone quite a ways in convincing American officials. I think there was a sort of a deal between the two sides. That’s why South Korea agreed to send its naval unit to the Strait of Hormuz and meet some of America’s defense cost-sharing demands.

But the COVID-19 outbreak put a halt to Seoul’s plan. Experts say it may be stalled until the second half of this year. However, what’s more concerning is North Korea’s chilly reaction to South Korea’s proposals. Professor Lee Jong-hoon says Pyongyang is more concerned about its relations with Washington more than inter-Korean cooperation projects.

North Korea’s top priority is improving its relations with the United States. Kim Jong-un wanted to produce some tangible results, preferably the easing of sanctions, by sitting down for a third summit with President Trump. The North Korean leader wants Mount Kumgang tourism to resume and the Kaesong Industrial Complex to reopen. He probably wants the U.S. to give him a definite go-ahead.

It will be hard to resume the Mount Kumgang tourism project or the inter-Korean industrial park unless progress is made between the two negotiating parties. It’s been four years since the industrial park in Kaesong was closed.

South Korean businessmen and civic groups held an assembly in front of the U.S. Embassy in Seoul to call for Washington’s increased involvement in restarting these projects. However, the industrial complex is the target of U.N. sanctions, so Seoul has very little room to maneuver. In addition, with the spread of COVID-19, the reopening of the complex will have to wait.

South Korean businesses that had invested in the Kaesong Industrial Complex have been struggling for the past four years. So, they made a proposal to North Korea to talk about some basic matters to eventually reopen the industrial park. In fact, South Korea’s support foundation for the Kaesong Industrial Complex was talking with the North Korean agency in charge of special development projects about holding a bilateral working-level meeting. But the North decided to close its borders until the virus outbreak is contained. It’s likely to keep itself isolated only if to show the world that it has complete control of the situation. The communist regime will talk with South Korea only when foreign tourists are again allowed into the country.

North Korea had no recourse than to close its borders because the country sorely lacks in public healthcare and medical systems. Some people in South Korea argue that they should provide assistance to the North to restore inter-Korean relations. Some suggestions include sending diagnosis kits, masks, and hand sanitizers. Since infectious diseases are an issue that concerns the entire Korean Peninsula, some people called for putting in place inter-Korean cooperation plans for such a situation. Unfortunately, Seoul couldn’t make any strides in this matter because its hands are tied without a response from Pyongyang.

Given North Korea’s insufficient medical system, it is right to lend them a hand. South Korea offered help in fighting SARS, the Ebola virus, and swine flu, but North Korea has been unresponsive.

The regime may keep refusing until the end despite Seoul’s intention to provide aid.

Pyongyang’s reason is that the amount of help offered is not enough. It’s a message to the South Korean government, but more likely one to the United States. It’s Kim Jong-un’s way of saying, “Don’t try to persuade us with such trivial things when we are thinking about giving up our nuclear program.”

After avoiding being removed from office, President Trump no longer has a reason to focus on North Korea until the presidential election. But the Moon Jae-in administration’s objective is clear – improve inter-Korean relations. Although the U.S. and North Korea are not talking, South Korea will use all its resources to independently better its relationship with North Korea. In that regard, Seoul officials will keep discussing the Kaesong Industrial Complex and individual tourism issues.

Although Seoul’s relationship with Pyongyang looks bleak at the moment, inter-Korean relations can always change, which is why South Korea should continue to push for sustainable exchanges and cooperation with North Korea and be ready for anything that may happen after the new virus is contained.