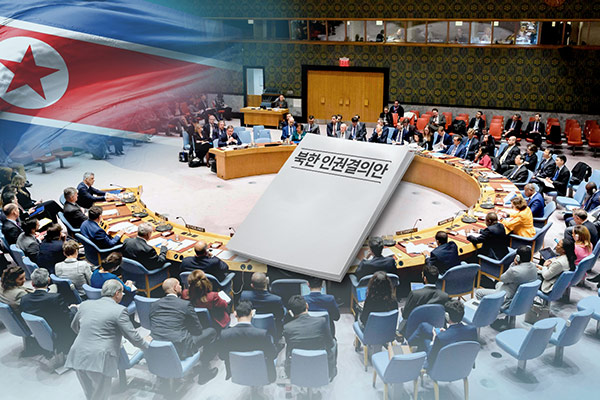 The United Nations has approved a resolution condemning North Korea’s human rights abuses for the 14th consecutive year. Attention turns to how the passage of the U.N. resolution may affect the nuclear negotiations between North Korea and the United States. With more to explain, here is Oh Gyeong-seop, researcher at the Korea Institute for National Unification.

The U.N. General Assembly adopted a resolution on Monday, December 17, local time in New York, strongly criticizing North Korea’s gross human rights violations and urging the North to stop the acts and improve the situation immediately. Member nations reached consensus on the resolution without a vote, meaning that they all agreed to pass it.

The U.N. has adopted resolutions slamming the grave human rights situation in North Korea every year since 2005. It condemns the long-standing, systematic, widespread and gross violations of human rights in North Korea and calls for the regime to address the problem.

The U.N. Third Committee, which overseas human rights issues, approved the resolution by consensus without a vote on November 15. And the document passed the latest U.N. General Assembly in the same way. This is the fifth time that the General Assembly has reached consensus on a North Korean human rights resolution, following similar cases in 2012, 2013, 2016 and 2017. It reflects negative international sentiment toward the dire human rights situation in North Korea.

This year’s resolution cites the 2014 report of the U.N. Commission of Inquiry on Human rights in North Korea. The report describes crimes such as torture, inhumane treatment, rape, forced labor, public executions, arbitrary imprisonment and execution, and lack of legal procedures to protect human rights in the North. The recent resolution once again expresses deep concerns over these human rights abuses.

Also significantly, the resolution reflects international efforts to hold the perpetrators accountable. It urges the U.N. Security Council to take appropriate action to ensure accountability and recommends selective sanctions against those most responsible for crimes against humanity. Clearly, the expression, “those most responsible,” refers to North Korean leader Kim Jong-un. It shows that international attention has shifted to the punishment of perpetrators.

For five years in a row since 2014, the U.N. resolutions have called for the referral of North Korea’s human rights abuses to the International Criminal Court and punishment of those responsible. This indicates that the international community is highly critical of North Korea’s human rights issue. Notably, this year’s resolution includes a new section.

Significantly, the resolution says the U.N. supports this year’s diplomatic efforts, as seen in inter-Korean summits, the North Korea-U.S. summit and denuclearization negotiations.

In particular, the resolution mentions the reunions of separated family members in South and North Korea. It says that the international community pays attention to the urgency and importance of the separated families issue and welcomes the resumption of the family reunions in August as well as the September inter-Korean summit agreement to strengthen humanitarian cooperation for a fundamental solution to the issue of separated families.

The U.N. positively evaluates Pyongyang’s efforts toward the separated families issue as well as its summit talks with Seoul and Washington, in an apparent move to encourage North Korea to become a responsible member of the international community. In fact, the U.N. Security Council has failed to convene its annual meeting on North Korea’s human rights for the first time in five years.

But the United States is seeking to hold the meeting in January next year as part of efforts to highlight the North Korean human rights issue in the international community. On December 10, the U.S. put three key North Korean officials on a list of those sanctioned over charges of human rights violations. The U.S. seems to be placing more pressure on North Korea over the human rights issue, with their dialogue deadlocked following the indefinite postponement of high-level talks.

Washington’s recent imposition of sanctions on three senior North Korean officials for their involvement in human rights abuses will likely put great psychological pressure on the North. In doing so, the U.S. is sending a clear message that it will step up pressure on North Korea, with economic sanctions still in place, unless the North implements the denuclearization measures it promised to take during its summits with South Korea and the U.S.

Given growing pressure both from the U.S. and the international community, North Korea needs to take denuclearization action and make efforts to improve its human rights situation at the same time.

Not surprisingly, North Korea has had an angry response to the passage of the U.N. resolution. North Korean Ambassador to the U.N. Kim Song said that his country would flatly reject the resolution, which he claimed fabricated the cases of human rights infringement.

Yet, Pyongyang refrained from criticizing Washington. Marking the seventh anniversary of the death of former North Korean leader Kim Jong-il, current leader Kim Jong-un stressed the need for a fight but there was no particular message toward the U.S. It appears that the North is adjusting its level of criticism in order to find a compromise with the U.S. The ongoing stalemate in their nuclear negotiations is likely to continue until the year’s end.

We have to pay attention to the message Kim Jong-un will deliver during his New Year’s speech on January 1—the message about denuclearization and an improvement in inter-Korean relations as well as North Korea-U.S. ties.

It is highly likely that a second North Korea-U.S. summit will be held early next year. But first, the two countries should reach a compromise on denuclearization methods at behind-the-scenes negotiations.

For now, the primary concern is Kim Jong-un’s possible visit to South Korea. I think his Seoul visit, if realized, will be a major positive signal for denuclearization or a better inter-Korean relationship.

The bone of contention between North Korea and the U.S. is how to strike a balance between denuclearization and a guarantee of regime security. Now, the human rights issue has been added to their negotiations, intensifying their war of nerves even further.

With the year 2018 drawing to an end, both sides are taking a step back from the negotiating table. Attention is drawn to when the two countries will end their fierce tug-of-war and engage in productive dialogue.