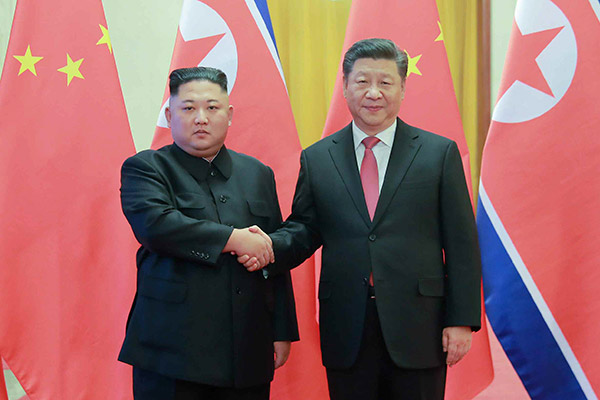 North Korean leader Kim Jong-un began his China visit on Monday, January 7. The surprise trip came amid repeated remarks from U.S. President Donald Trump suggesting a second summit with Kim will take place soon. Some analysts say that Kim’s latest China visit, his fourth since coming in to power, is the latest move in a diplomatic strategy game on the Korean peninsula. Here’s Kim Joon-hyung, an international studies professor at Handong Global University, to examine the background and significance of the North Korean leader’s recent visit to China.

I think the visit has multiple purposes. First, Kim traveled to Beijing in a strategic move to promote communication with China, ahead of a possible showdown with Trump. Also, North Korea hopes to secure support from China when holding negotiations with the U.S., whatever the results of talks may be. For Kim, China’s backing will be a sort of “insurance” if his negotiations with Trump fall through. Or, North Korea probably wanted to show more consideration to Beijing and dispel suspicions that China has been sidelined in peace-building efforts on the Korean Peninsula.

The North Korean leader visited China three times last year. The visits, especially the one made a month prior to the first North Korea-U.S. summit in June, came amidst a relatively favorable diplomatic situation. Therefore, I’d say that Kim’s latest visit to Beijing was more about strengthening communication with China than putting pressure on the U.S.

Many are paying close attention to why Kim traveled to China at this particular time. According to the North’s state-run Korean Central News Agency, the leader departed from Pyongyang Station on January 7 at the invitation of China and his private train arrived at Beijing Station the next morning. January 8 was Kim’s 35th birthday, and the U.S. and China were holding high-level trade talks in Beijing on the same day.

It is certainly an important signal that Kim chose China for his first diplomatic trip in 2019, especially while North Korea and the U.S. consider the possibility of their second summit.

I imagine Kim and his Chinese counterpart Xi Jinping exchanged thoughts on another summit between Pyongyang and Washington. The two probably reaffirmed Kim’s commitment to denuclearization and coordinated possible countermeasures to take against the U.S. if negotiations go south.

For much of this decade, North Korea-China ties were rather precarious. But the two communist allies improved relations quickly last year. And they demonstrated their friendship with a birthday celebration for Kim Jong-un in Beijing this week.

North Korea and China mark the 70th anniversary of establishing diplomatic ties this year. Kim and Xi reportedly discussed ways to develop bilateral ties, including economic cooperation, during a one-hour summit on Tuesday afternoon. The summit meeting was followed by a welcome dinner and a birthday party for Kim that lasted several hours.

Noting the strategic cooperation between Beijing and Pyongyang, analysts speculate that Kim’s trip means a second North Korea-U.S. summit will be held in the near future.

Officials in the U.S. have mentioned late January or early February as the possible timeframe of another North Korea-U.S. summit. Trump and Secretary of State Mike Pompeo have also hinted that a second meeting is in the works. It seems working-level negotiations are being held to facilitate the summit. In this context, Kim Jong-un’s recent China visit suggests that the second North Korea-U.S. summit is taking shape now and will happen sooner or later.

Kim made his first trip to China in March last year, right before Pompeo visited North Korea. He also held summit talks with Xi in China in May and June, before and after the June summit between North Korea and the U.S. in Singapore. Given that, it is possible that Pyongyang and Washington may accelerate negotiations after Kim’s China visit this week.

However, the preliminary coordination between North Korea and China could end up having a negative effect on the North Korea-U.S. summit. That’s because the U.S. may suspect that China, North Korea’s primary supporter in the international community, is meddling in Korean Peninsular issues.

It seems many strategists in the U.S. view the recent China visit by the North Korean leader as pressure on Washington. Of course, the U.S. is unhappy about that. The Wall Street Journal says that China is trying to strengthen its position in trade negotiations with the U.S. by inviting the North Korean leader, while a story in the Washington Post argues that Kim’s surprise visit to China is in fact a veiled warning to President Trump. Indeed, any meeting between North Korea and China could place some pressure on the U.S.

Beijing may cooperate with Pyongyang when North Korea seeks a backup plan. Kim Jong-un in his New Year’s speech said he would choose a different path if the U.S. sticks to pressure and sanctions. We have to note China’s role in that scenario.

Kim Jong-un said that North Korea will seek an alternative plan if the U.S. does not take corresponding measures to what Pyongyang perceives as concessions it has made. In such a scenario, China may play a bigger role on the Korean Peninsula.

For now, it is hard to predict exactly how a second North Korea-U.S. summit may unfold.

The key is what Kim and Trump will exchange and whether their exchanges will be irreversible. I don’t think a roadmap for North Korea’s complete denuclearization will be established after at a single meeting.

But if North Korea takes some discernible measures such as partial dismantlement of its nuclear weapons, and the U.S. eases sanctions on the North, that’s still a hopeful sign. I believe the first three months of this year are very important, and decisions could be made in that time that alter the fate of the Korean peninsula.

It is too soon to tell for certain how Kim Jong-un’s latest trip to China may affect talks between the North and the U.S., as well as the inter-Korean dialogue. As Professor Kim notes, the next few months are likely to be crucial in deciding what shape and form peace takes on the peninsula.